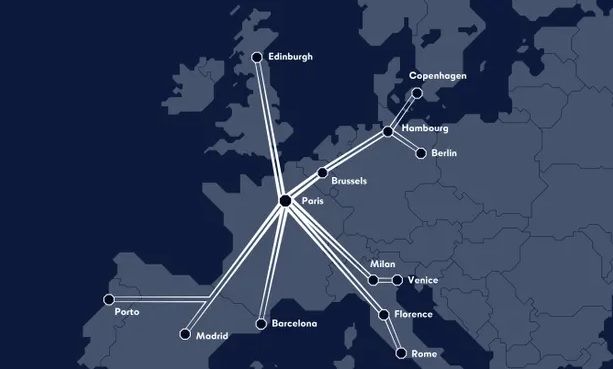 Will Porto be the main terminal for international rail services?

The government’s recent statement that travel times between Madrid and Lisbon would be reduced to nine hours borders on the ridiculous. A high-speed train could cover the distance of 715 km in about 3 hours if its average speed was 180 km/h. New trains and rails etc. already operate at up to 300 km/h.

The bottleneck seems to be between the Portuguese border and Lisbon. Just two years ago, Pedro Nuno Santos, Portugal’s Minister for Infrastructure and Housing, told the European Parliament’s Committee on Transport and Tourism: “We expect, by the end of December 2023, to have a high-speed connection between Lisbon and Madrid, which provides for a maximum speed of 350 kilometers per hour”.

Although Spain is developing the link from Madrid to the Portuguese border, aided by EU funds, there seems to be no news on the ongoing link with Lisbon. Rail industry contacts say they are now eyeing Porto as a potential international rail gateway as Spain upgrades missing sections of its high-speed network to link Porto at a much faster speed.

Sadly, at the moment the fastest and cheapest way between Madrid and Lisbon is by bus. It takes six and a half hours and costs around €30. By train, it takes over nine hours and costs twice as much. By car, it’s about six hours. Correct me if I’m wrong, but it seems that less than three hours by high-speed train is a very attractive alternative, so why isn’t that happening?

There are obvious advantages. Porto station (Campanhã) would be the same station for incoming and outgoing connections. In Lisbon, you would have to change stations. Portugal is currently working on upgrading the Porto Lisbon high-speed rail link with an expected journey time of around 2.5 hours. The same Alfa Pendular train continues to the Algarve at approximately three hours. Thus, from north to south, no change of station or train is an attractive proposition.

The total investment for the project “Madrid-Lisbon Atlantic Corridor High-Speed ​​Line for Mixed Traffic – Track, Electrification and Installations Phase II” amounts to EUR 1,564,718,863, with the contribution from the European Regional Development Fund amounting to to EUR 264,950,000 through the Operational Program for Spain”. The investment falls under the priority “Promote sustainable transport and remove bottlenecks in key network infrastructure”.

The Atlantic Corridor proposes to connect the western part of the Iberian Peninsula to France and Germany, with high-speed rail lines and parallel conventional lines, ensuring the continuity of networks between Lisbon, Madrid, Paris and Strasbourg/Mannheim . The EU wants this to happen, it wants the availability of high-speed rail to seriously challenge air travel. This can only be done by connecting France and the Iberian Peninsula with a “transparent” network, and a lot of progress is being made, but not, as far as I know, in Portugal.

Spain, on the other hand, is developing the network at an incredible speed. This year they opened a new high-speed rail tunnel under Madrid. In Europe, Spain has the longest network of fast rail links covering over 2,000 km, with Madrid being the hub of long-distance rail traffic on the Iberian Peninsula. High-speed connections from the north previously terminated in Madrid at the Chamartin terminus and those from the south at Puerta de Atocha. Until July, passengers had to be transferred to commuter trains if they wanted to travel between them. Thus, at present, the AVE 7.3 km double-track railway tunnel opened on July 1, connecting the high-speed lines serves northern Spain from Chamartín with those going from Atocha to Barcelona, ​​Valencia, Alicante, Malaga and Seville, the new connection will allow passengers to cross Madrid without changing trains and will reduce congestion around the Spanish capital.

The new double-track tunnel cost €338 million to build and is part of the wider €1.1 billion investment programme. Spain’s commitment to covering the country with a high-speed network is evident. You may think it’s irrelevant, but you can’t get to Portugal by train without crossing Spain.

If you need to travel between Lisbon and Madrid by train, sleeper trains would at least be a good answer. Incredibly, there is no direct train between Madrid and Lisbon, two adjacent European capitals. The Trenhotel Lusitania night train was temporarily suspended in March 2020 due to the Covid-19 pandemic, and Renfe (Spanish Railways) used this as an excuse to shut it down permanently.

People to watch are midnight trains. Appropriately named, this start-up French rail service will connect Paris to 12 European cities, including Edinburgh, Porto, Rome and Copenhagen. Along the way, guests will have their own private room with a bed and bathroom. Midnight Trains will also feature a bar and restaurant offering seasonal produce, signature cocktails, craft beers and wines. Guests can also opt for room service and have their meals and drinks delivered directly to the premises. I personally believe that to compete with airlines, the concept of midnight trains has great appeal. It makes your trip part of the vacation.

Disclaimer:
The opinions expressed on this page are those of the author and not of The Portugal News.

Decline in new vehicle inventories, close to a record level. Fuel-efficient cars are disappearing. But supply of full-size pickups and SUVs is growing, shrinking sets to move iron