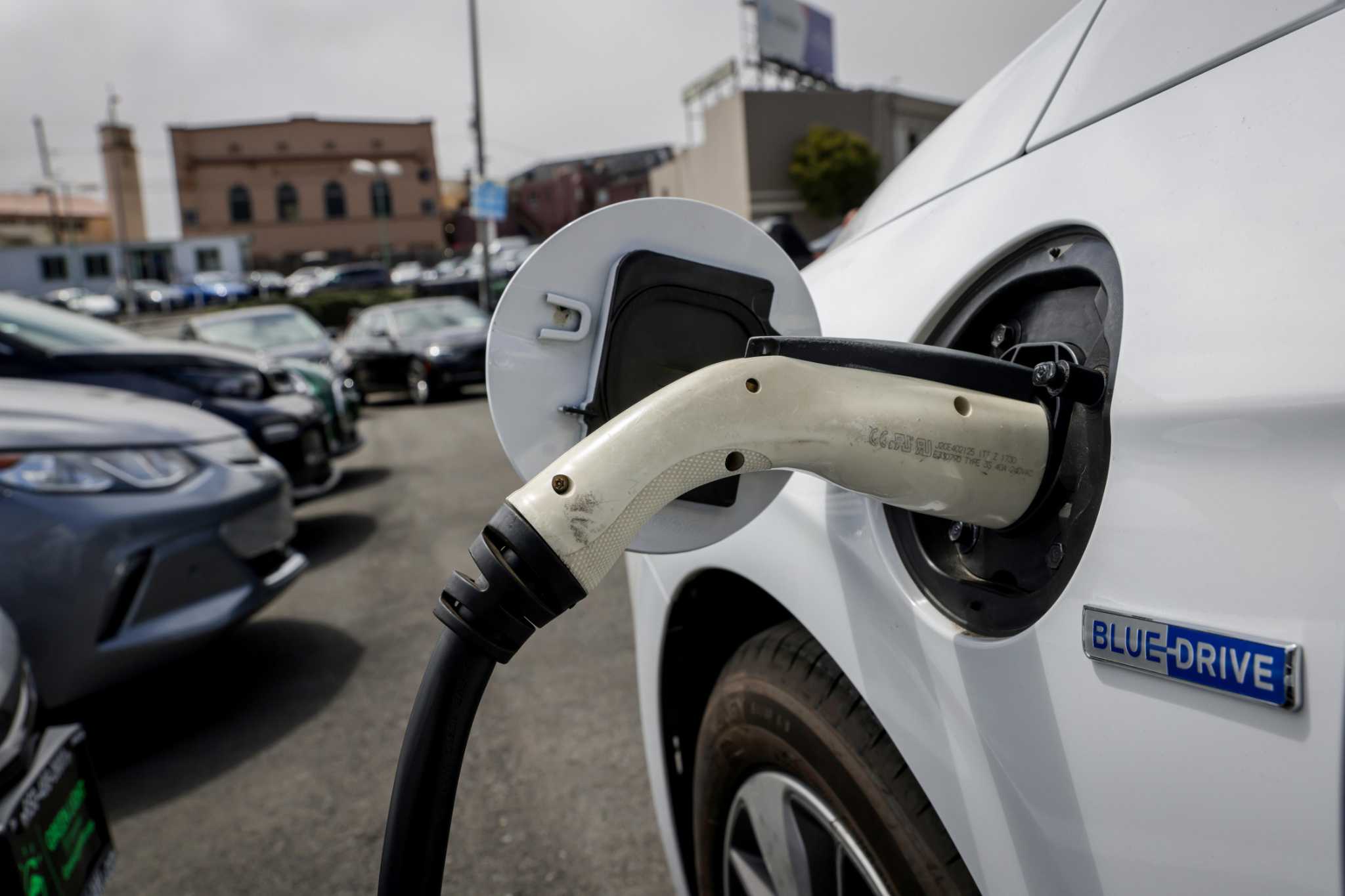 California voters could decide in November to raise taxes on the wealthy and spend the money on climate projects. But the effort was funded by an unlikely cheerleader: Lyft, the ride-sharing app that has helped drive up car emissions.

Lyft has poured more than $15 million into the campaign for Proposition 30, a ballot measure to raise the income tax rate for wealthy people to pay for programs to get more drivers to use electric cars .

The company’s involvement has divided Democrats who otherwise tend to align themselves with the state’s ambitious goals to reduce heat-trapping emissions that worsen climate change. Many environmentalists and construction worker groups support the measure, while Governor Gavin Newsom and teachers’ unions oppose it.

Newsom and other opponents say Lyft’s involvement is a self-serving ploy to get taxpayers to cover its costs to meet a state mandate to electrify its fleet of vehicles.

But the environmentalists behind Proposition 30 say Lyft has proven to be an important ally as the state works to meet its goals of phasing out gas-powered cars. They said California needed to act more urgently to mitigate the threat of climate change and reduce dangerous smog from vehicle emissions, which has increased in recent years.

The split could be one of the most contentious fights over a ballot measure this year, which could test Newsom’s already fragile ties with environmental groups, some of whom see him as inconsistent on climate.

Prop. 30 would increase the income tax rate by 1.75% for people earning more than $2 million a year. Most of the money would be used for electric cars, with 45% for rebates and other incentives to help drivers buy electric models and 35% for charging and refueling stations. At least half of the money for electric vehicles should be directed to low-income communities.

The remaining 20% ​​of the funding would go to forest fire prevention and control programs. According to one legislative estimate, the tax would bring in between $3 billion and $4.5 billion in revenue per year. It would expire in 2030 if the state meets its climate goals, or 2043 at the latest.

“They have almost no choice but to dive into the depths of the pool when it comes to this initiative,” Ives said. “In a smart way, they’re trying to ride the wave of electric vehicles.”

The mandate means Uber and Lyft must transition to electric cars faster than the rest of the state. In 2020, Newsom signed an executive order banning the sale of new gas-powered cars in California beginning in 2035.

Regulators at the California Air Resources Board chose ride-sharing apps for a reason: They are responsible for a disproportionate share of carbon emissions.

Using a ridesharing app creates about 48% more emissions per trip than if the driver had driven separately in a gas-powered car, as drivers typically spend more than a third of their time without a passenger in the car. car – idling while waiting for a ride request or driving en route to a pick-up, according to a 2018 analysis of the state.

On the one hand, the mandate is in line with Lyft’s commitment to transition its fleet to 100% electric vehicles by 2030, although the company is now legally bound to meet the slightly lower goal of l ‘State.

“While we are pleased to see aggressive environmental goals, we are disappointed that the efforts of the last few years have resulted in metaphorical sticks without carrots,” the company wrote in a letter.

Lyft has spent nearly $300,000 on lobbyists since early 2021, according to disclosure forms. Among a handful of other issues, company lobbyists have reached out to lawmakers and the Air Resources Board about the electrification mandate.

Lyft spokesperson CJ Macklin said the federal uncertainty over funding for climate initiatives has made it clear that others need to step in to help the state meet its goals. He added: “When environmental groups approached us to join their plan…we were excited about the prospect.”

U.S. Senate Democrats are rushing to vote on a climate spending bill, a groundbreaking deal that would expand federal tax credits for electric car buyers and create new incentives for automakers. But the bill only materialized recently and nearly died in the Senate on several occasions.

Early polls suggest that Californians’ support for Prop. 30 is strong. Last month, a survey by the Public Policy Institute of California found that 63% of likely voters supported the initiative while 35% opposed it.

But opposition to Proposition 30 within Democratic circles means the initiative faces a battle on two fronts, with attacks from both liberal forces and conservative-leaning groups, who oppose the notion wealth-based tax.

Newsom announced his opposition in late July and, epically, called the measure “a cynical plan devised by one company to funnel state tax revenue into their business.”


The governor said the tax could make the state budget more unstable; he has long opposed measures that earmark a portion of revenue for pet issues. Newsom also pointed out that the current state budget provides a record $10 billion for electric vehicle subsidies and infrastructure.

Newsom has been joined in its opposition by the powerful California Teachers Association, which has warned it could put a ‘special interest lock box’ on revenue the state may need for schools, in the event of a downturn. economic.

“This is a big corporate cash grab trying to get taxpayers to pay their share of the costs,” said CTA associate executive director Becky Zoglman.

For many environmentalists, Lyft’s role in the election fight is tangential to the existential threat posed by climate change. They said there was also no guarantee that the company’s drivers would get a significant chunk of the money earmarked for purchase incentives.

“There are no exclusions in the measure,” said Bill Magavern, policy director of the Coalition for Clean Air, which supports the initiative. “We haven’t made the transportation progress we need. .”

If Proposition 30 passes, the Air Resources Board will be responsible for determining how funding is distributed for rebates and other incentives designed to offset the higher price of electric vehicles. The measure does not require funding for ride-sharing apps specifically, but Lyft could lobby the air council for targeted grants.

Proponents of Proposition 30 have accused Newsom of opposing the measure to shield his ultra-wealthy supporters from higher taxes. They said California – where several cities, such as Los Angeles and Bakersfield, consistently rank among the worst in the country for air pollution – must take bold steps to reduce tailpipe emissions.

“This is a Robin Hood-style ballot measure,” said Dr. Ashley McClure, an Oakland primary care physician and co-founder of Climate Health Now, which supports the measure. “I commend Lyft because they’re trying to align incentives the right way. We need to help people who don’t already drive Teslas.”

Electric car sales are rising in California — about 9.5% of new vehicles sold in the state last year were electric models, according to the New Car Dealers Association. But analysts say a much lower percentage of ride-hailing drivers have electric cars, as few as 1-3%.

Uber and Lyft face an obvious hurdle in converting their fleets to clean cars: Their drivers are independent contractors who own their own vehicles and set their own schedules. Both companies have partnered with leasing companies to help drivers switch to electric cars, although some critics say the companies are unfairly shifting the burden onto drivers.

Harry Campbell, a driver who runs the Rideshare Guy blog, said most drivers simply can’t afford the advertised price of an electric car, even though it would save them money on the road. gasoline and maintenance over time. He said they needed help making the change.

“For a lot of them, it’s the upfront cost,” Campbell said. “I don’t see how they could get there on their own.”

Dustin Gardiner (he/him) is a writer for the San Francisco Chronicle. Email: dustin.gardiner@sfchronicle.com