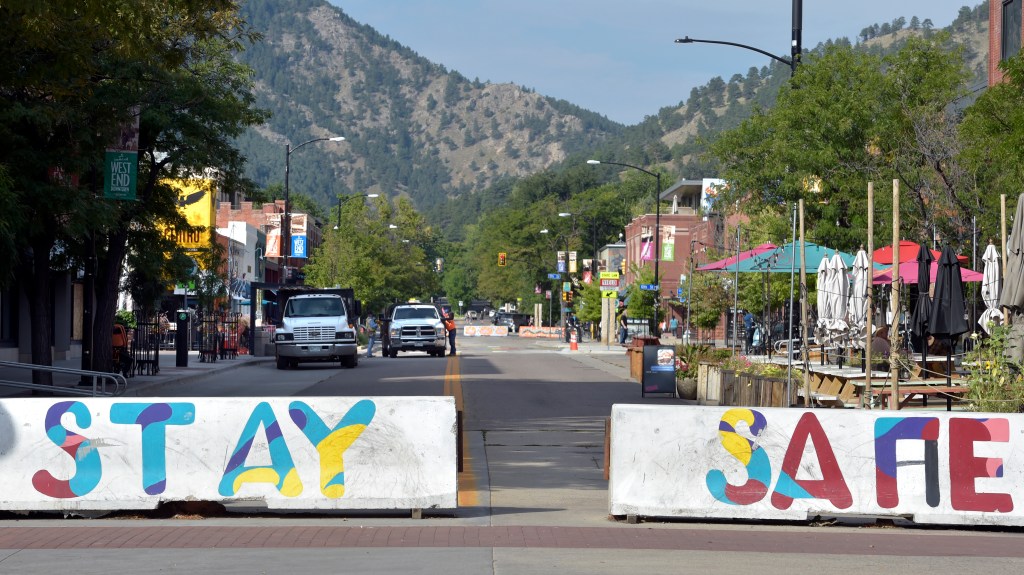 Later this month, Boulder will reopen the west end of Pearl Street to cars while the city undertakes a longer effort to assess whether other streets and public spaces in the city could or should be repurposed.

Since the Pearl blocks between 9th and 11th Streets were closed to car travel under a May 2020 emergency ordinance, it was inevitable that they would eventually reopen — at least according to city staff.

The street closure, established as part of Boulder’s business resumption program, was intended to help restaurants that were forced to close or operate with limited capacity during the height of the pandemic. Now that those emergency orders have been completed and Boulder’s new outdoor catering pilot is up and running, that time has come, staff said.

“We believe it is certainly the responsibility of city management to reset any street that has been temporarily closed, just as we do in the event of a major break or construction,” said City Manager Nuria Rivera-Vandermyde. . “It’s obviously an unusual situation, but it was a temporary pandemic-based shutdown. Now is the time to reset it.

But that doesn’t mean city staff are against the idea that West Pearl could ultimately be repurposed to create a more pedestrian-friendly open plaza feel. It’s just something staff need more time to study, Rivera-Vandermyde noted.

“The silver lining, I hope, and the conclusion is not that we want to see a section of a street remain closed, but rather that we like this concept and want the staff to strive to increase it in all the city,” she said.

The idea was backed by city council on Thursday, although some members felt they didn’t have much choice in the matter.

Although the Council could not reach a clear consensus when discussing the closure of the West End earlier this year, Friend said he felt he would finally have a say in the question. That seemed less true on Thursday, however, as the idea was presented for council discussion without a public hearing.

Along with being forced to reopen to the street due to the temporary nature of the closure, the city cited the impact on businesses as a reason to reopen the street while a more permanent solution is considered.

This notion was echoed by the Downtown Boulder Partnership at Thursday’s meeting.

“We need to return access for the winter as we … aggressively and creatively explore our many options downtown and out west,” said DBP CEO Chip, who doesn’t use a Last name.

Some of the businesses on the west end of Pearl Street say the closure has negatively impacted their establishments by removing parking and affecting accessibility.

The west end has been slower to recover than the rest of downtown. According to city sales tax information presented Thursday, West Pearl is currently at 78% of its pre-pandemic 2019 sales tax revenue levels, while the whole of Boulder is at 123% of 2019 levels.

However, ahead of Council’s discussion last week, a large majority emailed in favor of keeping the closure, at least in part because it’s in line with the city’s climate goals and would reduce gas emissions to greenhouse effect by encouraging people to walk or cycle downtown.

This division is perhaps further exemplified by the fact that two city councils – the Transportation Advisory Board and the Downtown Management Commission – had differing views on how to proceed.

In a bid to get people out of their cars, the Transportation Advisory Council has advocated for West Pearl to be closed to car traffic.

“Covid, in particular, has given us as a city, as a community, the kind of momentum to capitalize on a chance to fulfill some long-held desires,” President Tila Duhaime said.

On the other hand, the Downtown Management Commission argued that more research needs to be done before reaching a long-term conclusion.

No matter what happens in the future, many have reiterated that West Pearl is a vibrant place known for attracting more Boulder residents than the bricks of Pearl Street Mall. Its unique nature should be considered in any decision regarding the future of the West End.

“It’s a couple of blocks beloved by locals in particular,” Friend said. “Whatever happens next, let’s create a place locals love.”

Bus with the Marin Airporter logo carrying migrants to NYC; the company claims that buses have been sold