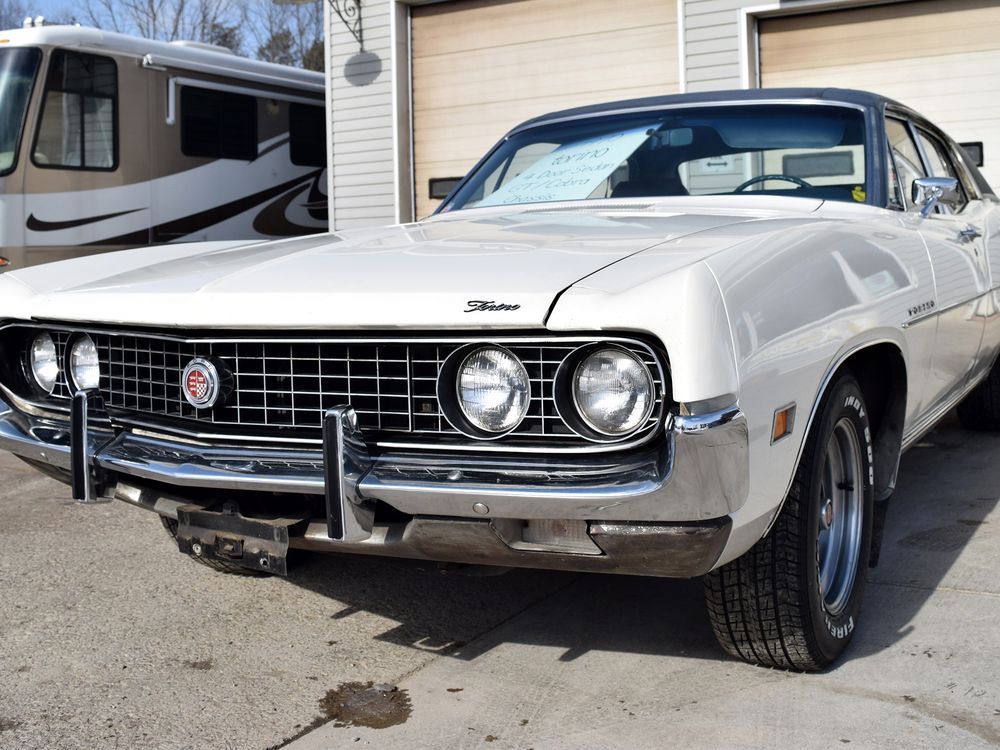 When an obscure order for a new 1970 Ford Torino was submitted to Ford of Canada in 1969, company officials said they couldn’t – or wouldn’t – build the car.

On behalf of a now long-forgotten customer, a Ford dealership asked the company to build a four-door Torino sedan. But rather than equipping it with the standard V8, the customer wanted the Torino to be mounted on a Torino GT Cobra racing chassis that included the high-performance 429 V8 Cobra Jet engine.

Ford said it couldn’t be done, but one of the company’s Canadian engineers knew it was possible.

Norm Tufts was only 36 when he heard about the strange Torino order and immediately realized that such a Torino could be assembled at Ford’s Oakville plant.

“They said it could never be built,” he recalls. “That’s what I was told at a distribution meeting I attended. But I knew it could be built.

And so, using the company’s in-house knowledge and skills, Tufts ensured that the one-of-a-kind Torino was indeed built. An order was submitted and fulfilled in October or November 1969 at the Oakville plant – on behalf of his father, a retired Toronto teacher.

Tufts’ father took delivery of the performance sedan from a Toronto dealership and drove it for 22 years.

Tufts said his dad was thrilled the Torino looked like a family car, but handled like something you’d see at a NASCAR track. It was a wolf in sheep’s clothing.

“He loved the car,” Tufts said of his father. “His neighbors in Toronto always asked him, ‘How come you always drive those fast cars and are such a conservative driver?’ Dad loved it. »

The Cobra Jet featured a four-barrel carburetor with an 11:1 compression ratio. It needed “race fuel” – or gas with an octane rating of 100. According to some sources, the V8 produced 375 horsepower. The car Tufts had ordered for his father was built for conventional family use but fitted with a rare muscle car engine and was based on a racing chassis.

To ensure his father could drive the car using more readily available fuel in the early 1970s, Tufts had the engine modified somewhat so that it would run on lower octane fuel.

“My dad was going to have a hard time getting the right fuel for this Torino, so I took the car to a Ford dealership in Toronto and he had thicker head gaskets put on the engine which lowered the rate. compression ratio from 11:1 to 10.5:1. That’s what made it possible to use Ultra 94 fuel.”

Norm Tufts became the owner of the rare Torino in 1992. It had 60,000 miles on the odometer and had been meticulously maintained. Since then, Tufts has driven it another 12,000 miles.

“It drives like new,” he says. “It’s fast. My wife thinks I’m crazy, but it’s been appraised at $30,000. The people most interested in this car are people who race cars. I mean, it’s really fast .

Tufts can’t remember how much it cost to buy the Torino when it was new, but said it wasn’t an unusual sum. He recalls that the price of the sticker was “reasonable”.

The Torino was fitted with a C6 automatic transmission and is in original condition.

But now the 52-year-old car has been donated to the Reynolds Museum in Alberta, a facility dedicated to automobiles and transportation history. This is the second car Tufts has donated to the museum; the first was a rare 1953 Ford convertible built in Canada.

The 1970 Torino was picked up for transport from Tuft’s home in Grand Bend in late February. Even then, the retired Ford engineer, now 89, had to remind the museum and its haulers that the rare Torino requires super high octane fuel.

“Here they loaded this car in the trailer, to go to Alberta, and it wasn’t running well,” Tufts said. “I found out they put fuel in the tank, but it wasn’t Ultra 94. It must be Ultra 94. And I told them. The engine was built to use 100 octane, but it’s been modified to accept 94. But the octane can’t be lower.

Introduced in 1968, Torino is named after the Italian city of Turin and was initially a premium version of the Ford Fairlane. In 1970, however, the Fairlane name was retired and Torino became Ford’s primary mid-size car name. This distinction was extended to include the 1976 model year, after which the Torino name was renamed LTD II.

Almost from the start of Torino production, Ford incorporated large engines such as the Cobra Jet (a $306 option in 1968) into the Torino model. The car quickly gained a reputation among the street racing crowd. Torino was also used as a base for Ford’s NASCAR program.

For 1969 the Torino was relatively unchanged, but for 1970 there was a new body that sported Chrysler-like fuselage styling. This Torino was more streamlined and aerodynamic, although the concept of aerodynamics was not something deeply considered 50 years ago. The new car was also bigger than its predecessor – five inches longer and 100 pounds heavier.

Looking back, 1970 was probably the height of the muscle car era, and companies like Ford were more than willing to give their customers as much horsepower as possible. Henry Ford II believed in such muscle and personally intervened when the company’s extensive racing program was threatened due to budget cuts. His mantra has always been: “Race them on Sunday, sell them on Monday.”

Production of all Torinos decreased slightly for 1971 to 326,463 units. Of these, only 3,054 Torino Cobras were built, making them extremely rare.

The car underwent a major redesign for 1972. Torino now emphasized a long-hood, short-deck appearance. But the most radical part was a huge oval grill that set it apart from the herd. Some people didn’t like it, but enough because Ford sold almost half a million Torinos in the 1972 model year – 496,645, to be precise – making it the fastest growing mid-size car. popular in North America. It was the first time Ford had outsold its Chevrolet counterpart, the Chevelle, since the Chevelle was introduced eight years earlier.

Although not officially called the Cobra Jet, the 1972 Torino Sport featured a 429 V8. The Sport model featured color-keyed twin racing mirrors, molded door panels, as well as side moldings and wheel lips. The car was equipped with F70-14 tires.

Unique to the Sport model, a reflective laser strip ran the length of the car. It replaced the chrome side molding and was available in four colors.

For 1973, Torino literally received a facelift for 1973 as designer Ford softened the oval grille. And it was another banner year, with almost the same number of cars sold the previous year – 496,581.

Ford sold nearly one million Torinos over two model years. Those numbers were huge at the time, and they’re still stellar 50 years later.