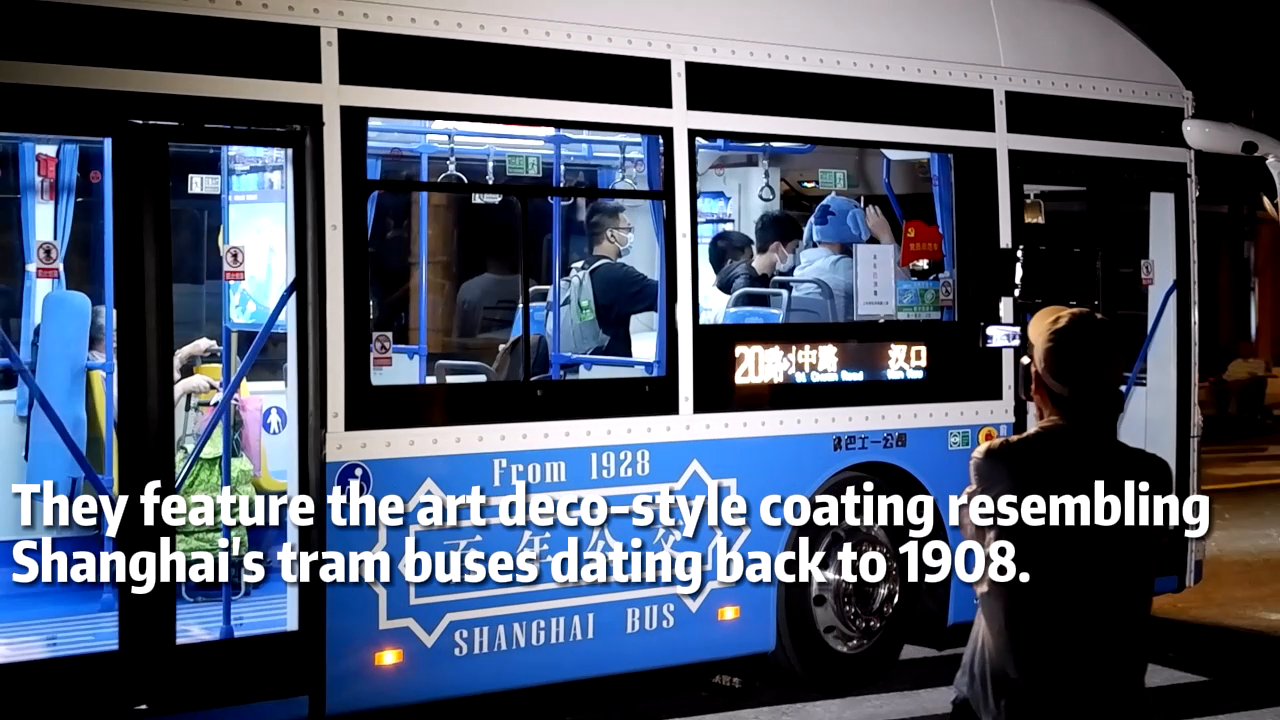 Reminiscing about Shanghai’s old days has always been popular with locals, even in a city that opened its port no more than two centuries ago.

Nostalgic vibes are all over the city; from well-preserved colonial architectures to baroque-style decorations, from popular western restaurants to vintage cafes.

Television series adapted from literary works about Shanghai from the beginning of the last century are predominant, while the classic song “Night Time in Shanghai” by famous local singer Zhou Xuan (Chow Hsuan) in the 1940s is often played in television programs. local radio stations.

In a final nostalgic rush, some vintage buses in downtown Shanghai were packed away during the Mid-Autumn Festival holiday in a retrospective reviewing the city’s glorious century-old development of public transport.

The 22 electric buses on Route No. 20, which connects Zhongshan Park to the Bund, feature Art Deco-style blue and white surfacing resembling Shanghai’s earliest tram buses dating from 1908 to the late Qing Dynasty (1644- 1911).

“Almost all passengers take photos throughout their trip, as if they came for the bus rather than a ride,” said a bus driver named Yang, who was part of the first group of drivers. vintage buses, which have been unveiled. Saturday.

The 22 vintage buses on Route No. 20 run between Zhongshan Park and the Bund.

Inside the buses, LED bulbs create an ambience of both Shanghai’s thriving nightlife and the city’s technological flavor. Some conductors, dressed as early 1930s newspaper delivery men in canvas jackets and hats, serve passengers at the terminal.

As a highlight, two standing wire poles to connect buses to overhead wires, once a common scene on local streets, have been retained, more like a nostalgic ornament.

These new energy buses are in fact mainly powered by long-lasting batteries. Other high-tech gadgets such as a brake warning system, high-definition panoramic cameras and a driver monitoring system have been installed to ensure safety. The buses are also wheelchair friendly with many barrier-free designs and facilities.

The city’s road transport bureau launched an online poll of four old-style Shanghai bus exterior paints or coatings, and most netizens chose the current one, an official with the bureau said.

He said the vintage coating on the No. 20 bus is a “bold attempt” to highlight the deep humanitarian and cultural characteristics of Shanghai’s public transport system, while improving services for passengers and bus drivers. .

A #20 bus conductor, dressed as a traditional newspaper boy, serves passengers at a bus stop.

“Buses are important carriers of a city’s culture,” said Ye Luxin, deputy general manager of Bashi No. 1 Company, the operator of Route No. 20.

“Road No. 20, for example, passes local landmarks such as Jing’an Temple, Nanjing Road and the Bund, which carry a wealth of memories for generations of locals.”

The route originated from the city’s first tram line, opened by the British Electric Traction Co. in March 1908 to meet the growing demand for travel as part of the city’s rapid expansion which could no longer be met by rickshaws and wagons.

The 6 kilometer long tram line operated between the temple and the Bund.

The public bus network has expanded since then with the massive construction of worker communities away from the old city to accommodate the rising working class, said Xue Liyong, senior researcher at the Shanghai History Museum.

Local residents write their stories on the historic bus line at the terminal station.

In the 1990s, Shanghai had Asia’s largest electric trolleybus system with 22 routes and around 1,000 electric buses with standing electric poles. Some buses have been exported overseas, for example to Kathmandu in Nepal.

The buses were so popular that they were assimilated into the Shanghai dialect slang which is still used by locals.

“Driving a trolleybus”, for example, means speaking inappropriately, “driving the No. 11 bus” means on foot, “driving a night bus” means working at night, while “pigtail rises”, which refers to the disconnected metal poles of the buses, is an understatement for death.

Not only did the buses have nostalgic coatings, but the Route No. 20 terminal station near Zhongshan Park also underwent a refurbishment to resemble the London-style bus station and “jet pavilion”, a classic charging station for electric buses with stand-up poles.

A glass dome supported by black iron frames provides shelter for waiting passengers and is a perfect film for old-fashioned buses.

The station has also been incorporated into the British-style park dating from 1914.

The British-style bus station at the terminus near Zhongshan Park.

Parts of the park walls have been removed to make it more accessible to residents and pedestrians.

Some of the park’s historic attractions, including a 160-year-old plane tree, believed to be the oldest in East Asia, and an open-air concert hall built in the 1920s, are now visible to station passengers. .

According to the Changning district government, the area will include a park, a road, a university, a bus line and trees over a century old.

Across Wanhangdu Road, formerly known as Jessfield Road when it was built in 1864, walls and fences have been demolished between East China University of Political Science and Law and the waterfront from Suzhou Creek to allow visitors to observe several historic buildings belonging to the prestigious St John’s University, founded in 1879.

Standing under a traditional British bus pavilion and waiting for a bus from the 1920s, while enjoying the scenery of a park built in 1914 and the university campus built in 1879 is a surreal experience. No wonder so many people flocked there over the holidays to reminisce about their own bittersweet old age.

Zhongshan Centennial Park has removed parts of the walls and fences to make it more accessible to pedestrians.