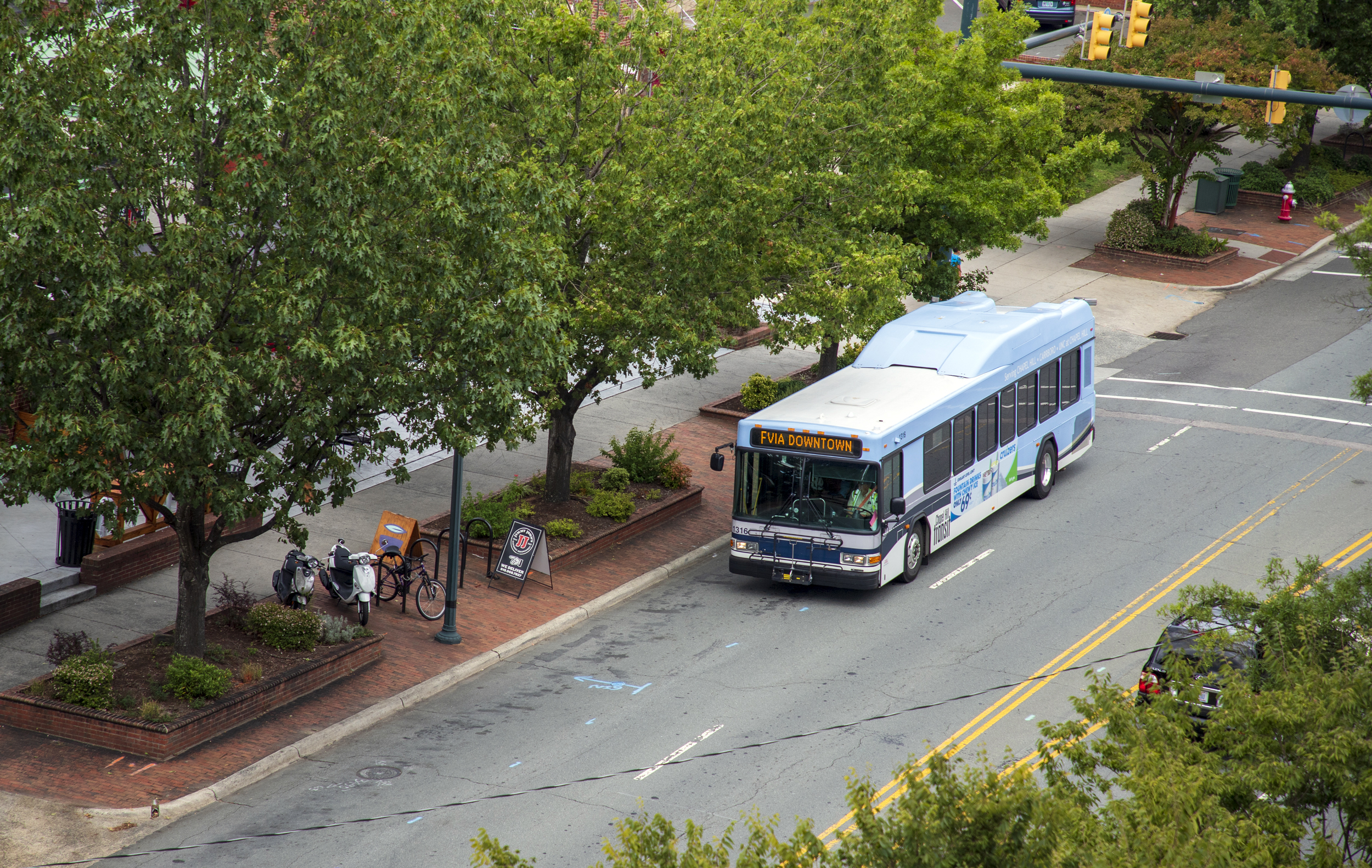 Viewpoints: What is the North-South Bus Rapid Service?

“Viewpoints” is a place on Chapelboro where locals are encouraged to share their unique perspectives on issues affecting our community. If you’d like to contribute to a column on a topic that matters to you, interesting happenings around town, reflections on local life – or anything else – send a submission to viewpoints@wchl.com.

Explanation: What is the North-South Bus Rapid Transit (NSRBT) service in Chapel Hill?

A view from John Rees

We are transit buffs and are really excited about the planned North-South Bus Rapid Transit (NSBRT) project in Chapel Hill. This article details what the line is and how it will help transit and traffic in Chapel Hill.

First of all, what is Bus Rapid Transit?

If you’re reading this blog, you’ve probably been somewhere with rapid transit. Maybe you’ve taken the LYNX light rail in Charlotte, MARTA in Atlanta, or the subway in DC. What makes them fast transit? Three things:

If you take the metro, you won’t be stuck because a freight train is using the track in front of you. The entire track is used exclusively by Metro.

Although schedules vary, MARTA trains generally run every ten minutes during peak hours and every twenty minutes when it is less crowded.

When you take LYNX rapid transit, you’re going to a station, where it’s nice and safe to sit and wait to get to your destination.

Bus Rapid Transit (BRT) includes all of the above, but the system uses buses instead of trains. You get most of the benefits of rapid transit – a dedicated lane, regular service, and stations – but it’s much cheaper to build and operate. Cities across the United States, from Richmond, Virginia, to Orlando, Florida, have opened BRT lines, with great results.

Ok, so what is the North-South Bus Rapid Transit (NSBRT)?

For current bus riders, you know it as the NS route. But the NSBRT will be faster, more reliable and more enjoyable in every way, from the moment you arrive at the station until the moment you arrive at your destination. There will also be a multi-use trail on both sides along most of the route (except downtown, which already has sidewalks), connecting you safely to your destination after getting on or off the trail. ‘bus.

Here is a map:

How is it different from the NS bus?

As part of the project, dedicated bus lanes are being built or converted (except via campus). This allows the bus to stay on time at all times of the day.

In addition to dedicated lanes, the BRT will benefit from traffic light priority (TSP)

This means that if a traffic light receives a wireless message that a transit vehicle is approaching, the green lights will stay on a little longer and the red lights will turn green a little faster. This helps keep BRT on schedule!

The stations will be at the level of the bus entrances

This means that people who use mobility scooters, a bicycle or who have a sleeping child in a stroller will be able to get on and off the bus without any problems. This makes boarding time faster and more accessible to everyone.

Premium resort amenities will be included

We get a multi-purpose path!

A multifunctional path is under construction as part of the project on both sides of the course (except for the city center and the campus which already have sidewalks).

Do you live between two stations? No worries, you’ll have a safe and easy way to get there and back home whether you’re walking, biking or rolling.

Added service, including night and weekend

If you want to go out to eat downtown at 8 p.m., you can take the bus and not have to worry about getting back at a reasonable time. And you won’t have to pay to park!

Although it will soon return to Chapel Hill Transit, BRT stations and vehicles will feature integrated vehicle tracking and real-time timetable information. You’ll never have to wonder when the next bus will arrive again!

A fleet of all-electric BRT vehicles

Why are we excited about this?

Because buses make Chapel Hill a great place to live, and the BRT will make it even better. Already, Chapel Hill Transit is the second-largest transit system in North Carolina, with over 3,000,000 (!) trips made each year.

Our bus has been free for twenty years and tens of thousands of people rely on it to get to the UNC campus and other destinations in Chapel and Carrboro every day.

The NSBRT will build on this success by creating fast, reliable service along one of the city’s busiest travel corridors. The city is already working on plans to support more housing, jobs and services within walking and cycling distance of BRT (transit oriented development or TOD) stops. A focus on fair TOD (ETOD), hopefully means more people who work in Chapel Hill will have the opportunity to live here as well.

Investments in high-quality public transit like the NSBRT allow people who work in Chapel Hill (UNC, UNC hospitals and downtown businesses, etc.) to rely on public transit as their primary mode of transportation. This could enable a family to go from two cars to one car, or from one car to no car, as they can rely on frequent, useful and affordable bus service.

We are also thrilled because the NSBRT Multi-Purpose Trail helps connect currently disconnected neighborhoods and communities.

Imagine riding an e-bike safely from the Homestead Aquatic Center to the Chapel Hill Public Library (connecting the path under construction on Estes), or from a downtown cafe to your apartment complex on MLK. This project will make getting around by bike, on foot and by bus so easy that you won’t even think of driving.

I don’t plan to use the NSBRT. Are there any benefits for me?

Yes! Even though many people use the bus, the majority of passengers are UNC employees and students. Where does that leave people who don’t work in Chapel Hill?

Each BRT vehicle can carry at least 60 passengers. At peak, there will be around nine BRT vehicles in service. If every passenger on each of these buses drove their own car, that would mean 60 more vehicles on the road FOR EACH OF THE NINE BUSES. This has both traffic congestion AND environmental benefits. For reference, here’s what 60 cars look like. Now multiply that by nine.

Even if you never set foot on the bus and enjoy walking, running, or biking, you’ll have a great dedicated multi-use trail along the BRT corridor

This path helps users reach or leave a stop. And it also opens up active transportation options on MLK for commuters and recreational uses!

Without NSBRT, traffic will get worse, which means NCDOT will eventually offer route expansions to maintain its acceptable level of service.

This means losing a LOT of trees along MLK in the right-of-way. (If you need proof, travel north on MLK, just past the I-40 interchange, and watch the forest clear cut for the I-40 widening).

Widening MLK will likely exacerbate congestion as well (oh hey, induced demand). If we build the NSBRT, we can keep our trees AND support a lot more housing in high traffic areas.

What is level boarding?

Although existing buses have the capability of “kneeling” (when the operator can lower the entire bus to curb level), it takes time to lower and raise the vehicle and contributes to the ” otherness” of people with disabilities. Level boarding means that station platforms and vehicles are always lined up, making getting on and off the bus easier, faster and more comfortable for everyone on wheels or on foot.

One of the stations will be a six-minute walk from Kenan Stadium. I recently went to a Carolina football game (I rode my bike) and saw lots of cars in traffic. Imagine parking at Southern Village or Eubanks Road (depending on where you’re coming from) and catching one of the buses after the traffic jam.

What do you need now?

Major capital projects like the NSBRT are more successful when funding comes from a variety of sources. Discretionary grants are available through programs such as FTA’s “Small Starts” capital improvement grant program, but they are extremely competitive. Funding requests are evaluated based on a variety of factors, including the split between local (i.e., non-federal) and federal contributions to the total project cost. This is usually reported as a percentage. Projects with a higher percentage of local funding are more competitive.

The NSBRT currently has very little local financial support, beyond a small amount allocated from transit tax revenues collected by Orange County. Neither the city of Chapel Hill, nor UNC, nor the State of North Carolina have invested significant funds in this project. The absence of strong local suitability of local partners could have a negative impact on the reputation and competitiveness of the project.

What can I do to help?

We’re glad you asked! Here are some ways to get involved:

Viewpoints on Chapelboro is a recurring series of opinion columns submitted by the community. All thoughts, ideas, opinions and expressions in this series are those of the author and do not reflect the work or reporting of 97.9 The Hill and Chapelboro.com.

Better if by sea: As the streets of Salem fill with cars, passengers take the ferry | New