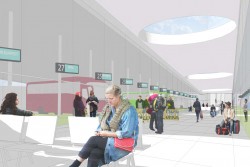 Why is this needed?

The new long-distance bus terminal will be located on Handelskai near the Stadion Center in the 2nd district. The location is directly connected to the motorway network (A23) and to public transport. A quick change is guaranteed via the nearby U2 â€œStadionâ€ station, which connects to the city center in just a few minutes. The terminal is also connected to bus lines 11A, 77A, 79A and 79B. There is also sufficient parking space on site, for example in the Stadion Center.

The long-distance bus terminal is also part of the “Waterfront” development area – the area northeast of the U2 between MeiereistraÃŸe and A23. In the coming years, a mixed-use urban district will be created here. It is characterized by its proximity to the banks of the Danube, the Danube Island and the Green Prater.

A replacement location for the Sports & Fun Hall which has been operated on the property where the terminal will be built is still under decision. The objective is a well connected and attractive location in the second arrondissement so that the hall is once again close to many sports fans. Ideally, the new location can be used both indoors and outdoors.

It is estimated that an average of 200 buses will be handled at the terminal per day, which means 400 to a maximum of 600 arrivals and departures per day. Vindobona previously reported on the project and estimates of the number of buses and passengers that will pass through the terminal, which you can find here.

Potential benefits for the region

Supporters of the terminal say it will fit well into the surrounding area and further enhance it with its distinctive architecture, well-designed public spaces, barrier-free connection to the Danube bank, greenery, climate protection and a significant connection with the Stadium Center. In addition, there will be offers such as cafes, restaurants or shops. They say the neighborhood will be livelier and the Engerthstrasse much more attractive.

In addition, MeiereistraÃŸe, EngerthstraÃŸe and Marathonweg, among others, must be relieved of the long-distance bus traffic that is currently handled there, as access and departures are made directly via the Handelskai from / to the A23.

In terms of safety, the long-distance bus station will be equipped according to the latest international standards. It will be designed in a modern, bright and transparent way and will offer passengers an attractive range of cafes, waiting areas, etc. Staff will be present at all times during opening hours; access to the bus platforms will only be possible with a valid ticket. In the new long-distance bus terminal, security will be on site at all times (midnight), and the control center will also be monitored 24 hours a day. Counters and information desks will be open from 7:30 a.m. to 9:00 p.m., and restaurants and shops are expected to be open from 7:00 a.m. to 9:00 p.m.

The following concerns are taken into account in the implementation of the project:

The investment cost of the long-distance bus station, including the design of the immediate surroundings, amounts to around 200 million euros.

The Donau Busterminal Realisierungs GmbH has been identified as a partner in the procurement process for funding and implementation. IES Immobilien-Projektentwicklung GmbH will develop the project for both investors and will work closely with the operating company.

Ariel Muzicant and Markus Teufel of Donau Busterminal Realisierungs GmbH said: â€œOur common goal is a long distance bus terminal of which Vienna can be proud. We will work coherently on the implementation of the ambitious concept in close coordination with all the actors involved. The long-distance bus station is radiant for the whole city, it is an important project – in particular a project which secures jobs and which is important for regional added value.

A total of 27 projects were submitted across the EU and a jury of experts selected the design of the Viennese architectural firm Burtscher-Durig as the winner.

In addition to the town planning, architectural and functional solutions, the sustainability of the submitted projects as well as the economic efficiency of construction, operation and maintenance were assessed.

Regarding the winning project, the jury chaired by Elke Delugan-Meissl said: â€œThe design intention to cover a vital center between the Stadion Center and Handelskai, which in the future will also function as an important urban development intervention in this regard. which concerns future urban strategies. , has succeeded. The design meets the price requirements, while providing the flexibility needed for further urban development.

The operating company, BGR Busterminal GmbH, made up of the companies Blaguss, Gschwindl and Dr. Richard, won the contract to operate the terminal.