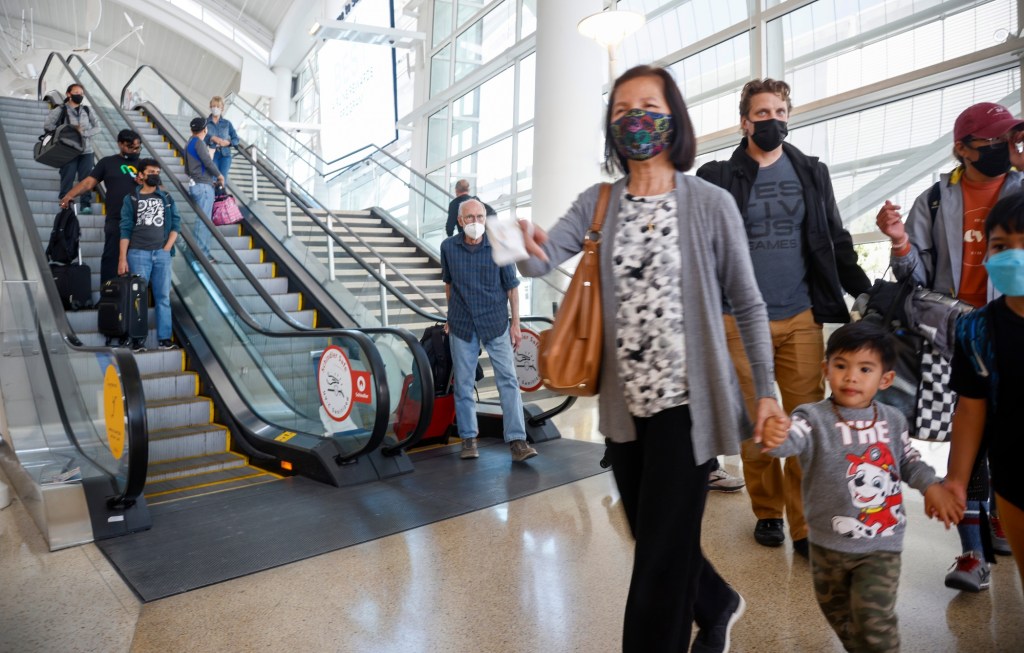 US expands face mask requirement for planes, trains and buses

Although COVID-19 cases remain low and the face mask terms disappeared from most public places, US health officials on Wednesday extended a mask mandate for airlines and public transportation that was due to expire on Monday by two more weeks, citing concerns about a surge in cases in the north -is.

The Centers for Disease Control and Prevention said the orderwhich applies to planes, trains, buses, ships, stations, airports, marinas and other transit hubs, will remain in effect until at least May 3 as it monitors the BA.2 omicron sub-variant now responsible for 86% of US cases and a similar share worldwide.

“In order to assess the potential impact of increased cases on serious illness, including hospitalizations and deaths, and health care system capacity, the CDC order will remain in place for the time being,” it said. the agency said in a statement.

The extension was welcomed by some Bay Area commuters on Wednesday, but questioned by some health experts who wondered what difference two more weeks would make.

“Thank God, because the CDC thinks the pandemic will be over in just 2 weeks?” tweeted epidemiologist and health economist Eric Feigl-Ding.

Johns Hopkins University professor Dr. Marty Makary said on Twitter that “the CDC is painting itself into a corner, extending travel mask mandates”, and should instead advise on individual risks and “stop policies trivialities of Zero-Covid for an inevitable virus”.

But Dr. Bob Wachter, who chairs the medical department at the University of California, San Francisco, said “given the recent increase in cases, I think the May 3 delay is reasonable,” in part because unlike a local restaurant, “a crowded plane is an unfamiliar gumbo of people from lots of different places. He added, however, that “if we don’t see a big increase soon, I’m in favor of the term ending in early May.” .

Face mask requirements have been among the most visible and controversial measures imposed to control the spread of the virus throughout the pandemic.

California ended its statewide mask mandate for indoor public places on February 15 and ended the statewide requirement in schools on March 12.

Most of the county’s public health and school districts followed the state and dropped their requirements as well.

Under the CDCs Community Level COVID-19 metrics revised in February to shift the focus from new cases to hospitalizations and healthcare system capacity, 96% of counties in the United States are at the “low” green level. According to CDC data, the 7-day rolling average of daily COVID-19 cases nationwide fell to 24,815 on March 29, a level not seen since early July – before last year’s delta surge. .

But the CDC noted Wednesday that since early April, that 7-day average has risen to 30,496 cases on April 11, according to the most recent figure reported. Cases have risen most sharply in the Northeast, in states like New York, New Jersey and Pennsylvania. But California also saw its 7-day average rise to 2,823 on April 11 from 1,989 on April 4.

The BA.2 omicron subvariant helped drive a significant rise in cases in Europe and Asia last month, although this also often coincided with an easing of public health measures. On Monday, Philadelphia became the first major US city to reinstate its indoor mask mandate after reporting a sharp rise in COVID-19 infections.

This is not the first time that the mandate of the transport mask has been extended. It was supposed to expire on March 18, but the CDC extended it by a month, saying it needed more time to develop a more flexible requirement.

At the Santa Clara Valley Transportation Authority, spokeswoman Stacey Hendler Ross said Wednesday that passengers have followed the rule on its trains and buses, where operators keep extra masks to hand out to passengers who board without them.

“People mostly use them,” Ross said. “It really wasn’t too much of a problem. It has almost become a way of life.

The mask rule has led to clashes on planes. The union representing Southwest Airlines flight attendants urged the Biden administration to drop the requirement, saying “physical and verbal assaults” on planes have “increased dramatically, many of which are related to mask compliance.” The Federal Aviation Administration has reported 744 unruly passenger incidents so far this year and 4,290 in 2021 due to masks.

Many foreign airlines no longer require face coverings and US carriers want to follow suit. In a March 23 letter to President Biden, they argued that “it doesn’t make sense that people are still required to wear masks on airplanes, but are allowed to congregate in crowded restaurants, schools and at public events. sporting events without a mask”.

The extension drew mixed responses from travelers in the Bay Area.

“We should keep them on because there’s another wave coming and it would be nice if it wasn’t so intense,” said Eve Vanderschmidt, who drove the BART to MacArthur station after gardening in San Francisco.

At Mineta San Jose International Airport, Jennifer Miller of Scotts Valley said, “I want to err on the side of masks, more vaccinations and more boosts.”

While Willow Glen resident Kristen Rossi said masks made sense at “airports because there are so many people and they are traveling from anywhere,” she reflected on the number of people ready to go. “I don’t like wearing them. . . We can’t go on living our lives like this. I don’t want to live my life in fear.