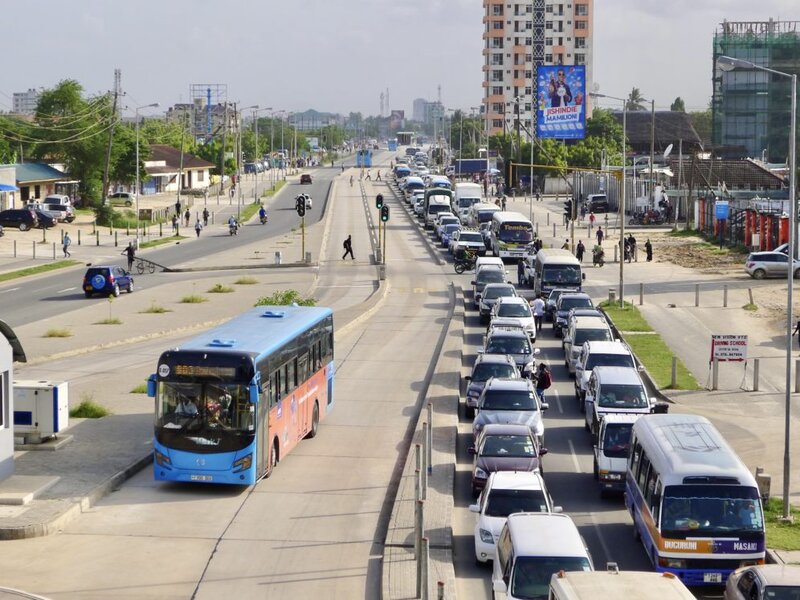 By John Shauri and Carolyne Mimano

In 2016, the city of Dar es Salaam launched the first phase of its BRT system. The BRT, a first in the East African region, came at a good time as the city grappled with growing transport needs that the informal daladala sector was unable to meet..

The BRT is an essential mobility link in the city, which is now home to more than six million people. The first phase BRT corridor has 21 kilometers of median bus lanes running from Kimara to Kivukoni along Morogoro Road, Sokoine Drive and Kivukoni Front, with branches from Fire to Gerezani along Msimbazi Street and Magomeni in Morocco on along Kawawa Road. This trunk system has a depot at Jangwani, five terminals and twenty-seven middle stations.

Did you read?
Kenya is already fully loaded with new e-mobility solutions underway

However, over the years the system has experienced challenges such as overcrowding of stations and buses, insufficient service during off-peak hours, and erratic progress. Many of the quality of service issues stemmed from an inadequate fleet size.

When the system opened, there was no tendering process for bus operation and services were offered on a net cost basis under a monopoly, resulting in a lack of control over the quality of service.

Did you read?
A path forward for an EV-proof future – World Economic Forum

The operator also faced financial difficulties due to high operating costs, exacerbated by flood damage to buses at the Jangwani bus depot and nearby roads, which were at times rendered impassable. By 2020, revenue collection had dropped significantly, prompting the government to take action.

In 2019, the government increased its ownership stake in UDART from 51% to 85% to alleviate financial hardship and also provide technical support. This year, following government interventions, major improvements are being made to improve the reliability and quality of service.

Did you read?
More options for decarbonizing transport in Africa

UDART expanded its bus fleet by commissioning an additional fleet of 70 articulated buses, bringing the total fleet to 210 buses. The larger fleet should increase coverage and reduce wait times.

The government is currently constructing a mini-depot in Ubungo to complement that in Jangwani, which is prone to flooding. With funding from the World Bank, plans are also underway to improve resilience in the Msimbazi River Basin by improving drainage into the Indian Ocean.

When fully operational, the first phase corridor is expected to carry 635,000 passengers per day, making it the busiest BRT system in Africa. In order to achieve the planned operational purpose, additional buses will be required.

Earlier this year, the government launched bids for a second bus operator who will bring in a fleet of 95 buses. Procurement is currently at an advanced stage and the contract with the successful bidder is expected to be signed in January 2022, with operation of the additional buses commencing shortly thereafter.

Did you read?
Fintech start-up takes steps to democratize mobility in Africa

A roadmap for electric vehicles in East Africa

Automated vehicle tracking is expected to improve operational efficiency and provide data on how best to use BRT buses to minimize waiting time. DART is also developing a roadmap for the introduction of clean vehicles, including electric buses and three-wheeled electric power services.

To ensure service quality and reliability, DART plans to move to a gross cost contract model where payment to bus operators will be based on the number of miles traveled. The government will receive revenue from an independent fare collection company, which will allow it to withhold payments to bus operators if services are substandard.

Switch from private vehicles to buses

Quality BRT operations are expected to result in a mode shift from private vehicles to informal modes, significantly improving the quality of life for residents of Dar es Salaam. As the system moves through Phases 2, 3, 4 and 5, operational effectiveness backed by strong political will is key to the success of the system.

Did you read?
Kenya is changing the e-mobility space in Africa with a new pay-as-you-go electric bus

As emerging economies continue to urbanise, investments in high-quality public transport are more imperative than ever to break the status quo of reliance on private vehicles. We look forward to seeing Dar es Salaam continue to be an African pioneer on the path to sustainable mobility.

Attack thwarted inside the Terminal: threatens a woman with a hammer

Electric buses and trucks will be more profitable by 2027, report says