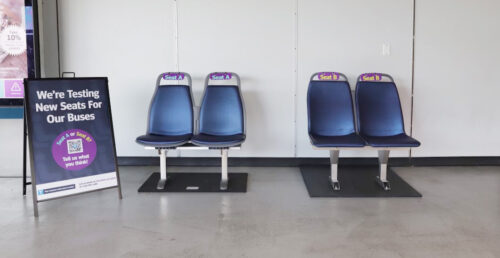 TransLink is testing different types of seats for future buses

That’s the question TransLink is asking in a whole different kind of immersive public consultation.

The transit authority is choosing between two types of new bus seats that will be used in a future order for new battery-electric buses.

These seats weigh about eight pounds less than current seats, which would make the buses up to 250 pounds lighter. With lighter weight, buses can travel farther on a single charge.

Passengers can give their opinion by voting for their favorite seat. The two different bus seats are at the SeaBus terminal at Lonsdale Quay, where passengers can sit down and vote by scanning the QR code with their smartphone.

The ‘winning seat’ based on customer feedback will be fitted to 14 incoming battery electric buses due to arrive later this year, enabling bus route No. 100 – along Marine Drive between Marpole Loop in South Vancouver and SkyTrain. 22nd Street Station in New Westminster — which will become TransLink’s first 100% battery electric bus route. The selected seat type could potentially be used on other buses ordered in the future.