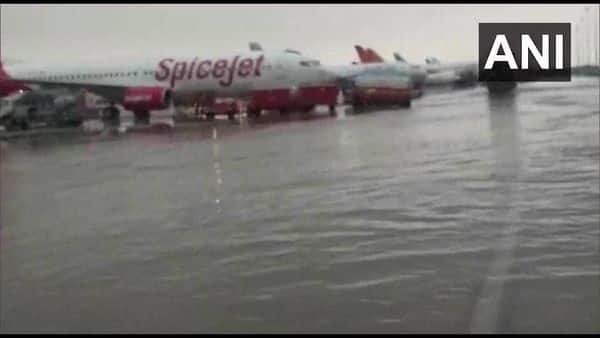 Sources said five flights were diverted from the airport this morning due to poor weather conditions.

Four domestic flights – two from SpiceJet and one each from IndiGo and Go First – were diverted to Jaipur. An international flight – an Emirates flight from Dubai to Delhi – has been rerouted to Ahmedabad, the sources said.

IndiGo tweeted that due to bad weather in Delhi, flight departures and arrivals are impacted at Delhi Airport.

Due to bad weather in Delhi (DEL), all departures / arrivals and their consecutive flights may be affected, another SpiceJet airline tweeted.

â€œDue to congestion due to heavy rains in Delhi, traffic jams are expected. Customers traveling are advised to allow extra time for their journey to the airport. Thanks! â€Vistara tweeted.

#TravelUpdate Due to congestion due to heavy rains in Delhi, traffic jams are to be expected. Customers traveling are advised to allow extra time for their journey to the airport. Thank you!

Delhi Airport said on Twitter that there was a congestion on the forecourt for a short time. “Our team was immediately lined up to review it and the issue was resolved.”

People have posted photos and videos of flooded streets on social media.

In a video on Twitter allegedly showing waterlogged streets in Madhu Vihar, some DTC cluster buses could be seen standing in the water and other commuters maneuvering their vehicles on the flooded road.

Officials from the Department of Public Works (PWD) said classified personnel were on the ground pumping water from the streets.

“Due to heavy rains early in the morning (Saturday), waterlogging has occurred in several places. We are tackling these issues as a priority. Our staff are on hand 24 hours a day to monitor the situation,” said one. responsible for PWD.

* Thank you for subscribing to our newsletter.