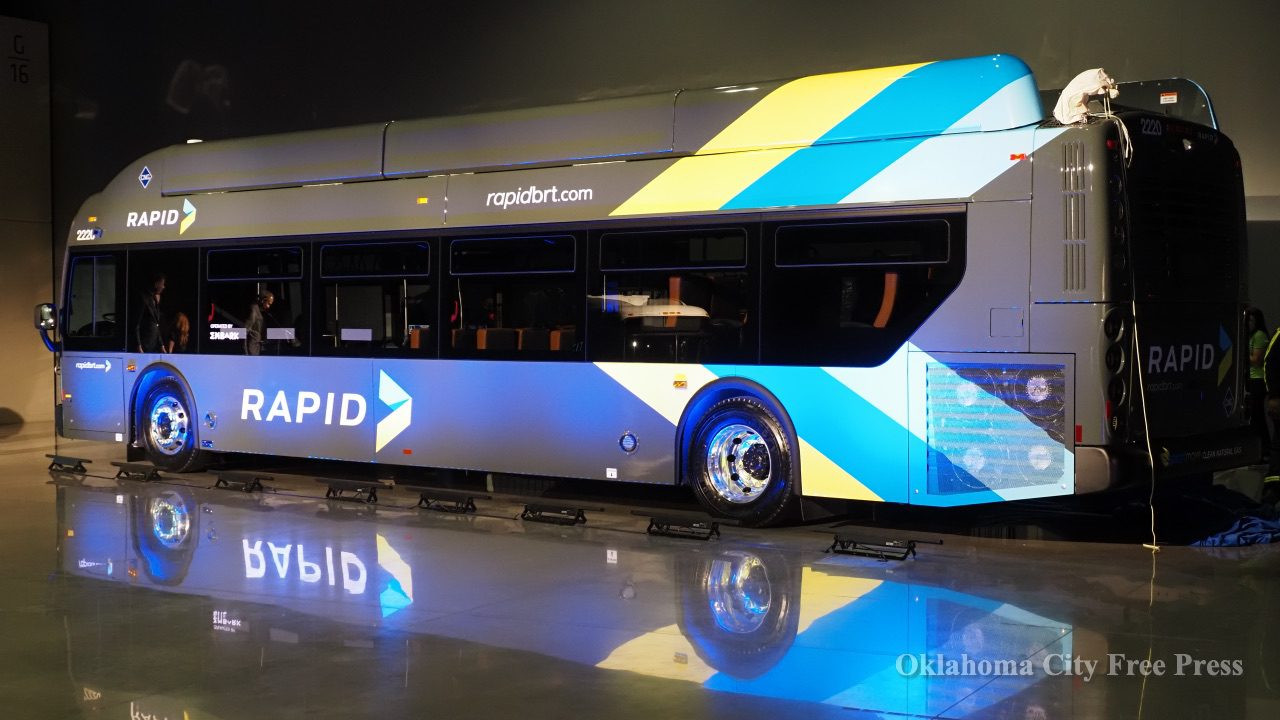 OKLAHOMA CITY (Free Press) – Scheduled to be operational by fall 2023, Oklahoma City’s first bus rapid transit (BRT) line has moved closer to completion with the reveal of new equipment that will will be used on the line on Thursday.

“This is the closest we’ll ever get to a subway in Oklahoma City,” Mayor David Holt said before the curtain was pulled back, revealing a distinctive new paint scheme on the first of nine new gas buses. compressed natural (CNG) fitted just for the line.

He pointed out that with the special lanes to speed up buses between downtown and the end of the line at N. Meridian and the Northwest Freeway and with sheltered platforms similar to streetcar platforms current users will have better seats and wifi accommodations as well as USB charging ports. for electronic devices.

According to information from EMBARK staff, construction of the first line will begin in the summer of 2022. DO FAST line will start the planning phase in 2025 and the South line in 2026.

According to EMBARK, “The overall objective of FAST is to expand local and regional mobility options, improve access to employment, support transit-oriented development (TOD), help improve community health, and improve the livability along the corridor.

Here is the route of the Northwest RapidBRT line:

Based on the criteria established by the Federal Transit Administration for BRT lines, here are the main features of the new BRT lines:

Expect increased use of public transit

After the big reveal, Free Press asked EMBARK and Central Oklahoma Transportation and Parking Authority (COTPA) Director Jason Ferbrache what the challenges would be in getting the public to use the new Northwest BRT because it’s not something that has been there or is part of their routine. before.

“Well, it’s this recurring challenge that we have of getting people comfortable in our community with the idea of ​​using public transit,” Ferbrache said.

“But you know, … it’s a bus rapid transit line. So it’s basically a line on the map. It’s very intuitive, easy to follow. [During peak times it will have] Frequency of 12 minutes. You basically don’t need a map or a timetable to use this system. So I think it’s going to be a big help in breaking down any barriers that people might want to try.

He said that even at off-peak times the line is designed so that buses arrive at each stop every 18 to 20 minutes, meaning anyone can just stop and know they will take soon a bus.

Ferbrache also said that the new protected and elevated platform stops will have digital signage connected to the system informing those waiting how long it will take until the next bus arrives, eliminating even more guesswork and the resulting reluctance to take the line.

Jeff Bezdek, a longtime proponent of transit expansion in the metro and OKC area, spoke to Free Press about the benefits of expanding the Rapid system.

“What’s really exciting is that it’s a cheaper way for us to reach areas that require a lot of movement and needed to be able to move people quickly,” Bezdek said. “And, in MAPS 4, we have a significant amount of money to basically take that and expand it northeast and south, and really develop good cross-pollination between transit vehicles.”

Comments from Board Members

Ward 6 Councilwoman JoBeth Hamon was there and told us she thought the new BRT line had benefits and visibility that just another bus line would have. Much of the lower end of the North West BRT will be in the Hamon district.

“The stops will have a dedicated station platform with all those amenities which are just much more visible to people whereas a lot of our fixed route services” don’t have a platform.

Hamon said the more frequent service would also attract people to the new line, as well as the new equipment with the distinctive appearance of dedicated buses.

Almost all of the northern part of the new BRT will be in Ward 2 represented by Councilor James Cooper who was a strong supporter of the OKC Streetcar concept and was also positive about the BRT concept.

Cooper later told us that he thought the BRT concept’s signal prioritization would help keep buses on time and with the frequency required by the concept.

However, he told us that some unenacted changes could ensure North West BRT is as reliable as needed to create more ridership.

Cooper focused on multiple lanes on Classen and the Northwest Freeway.