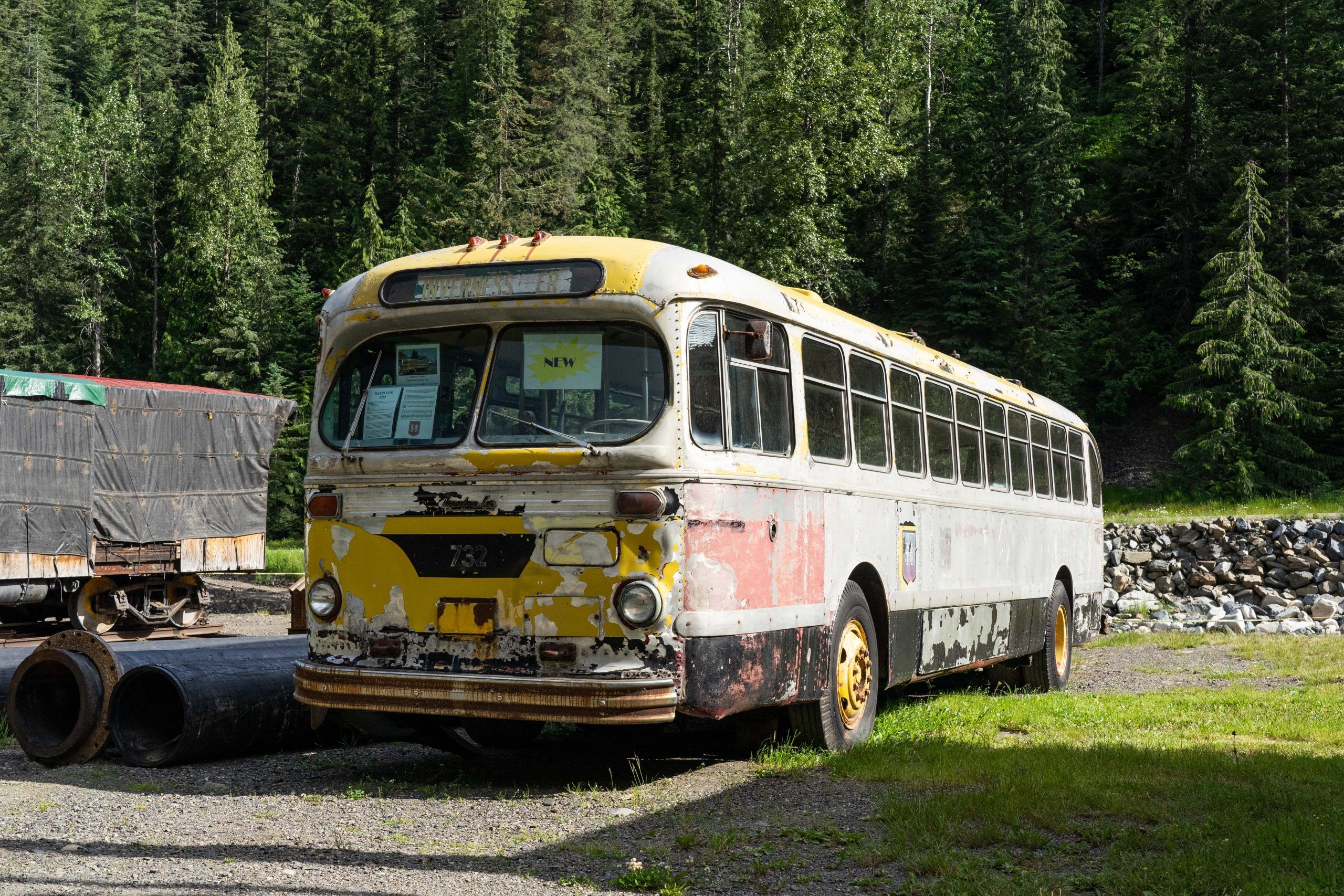 The Ghost Buses of Sandon, BC

Almost all children know this feeling. You stop on a road trip and enter a dark, dusty space, shelves full of relics from long ago. Floors creak under your feet, faded labels show products long absent from everyday use. Sometimes the experience becomes boring for a young and restless spirit, but there is always a hushed respect. This is how people once lived, and you feel the ghosts still lingering behind.

An hour and a half from Nelson, BC, in the heart of the Kootenay Mountains, I climb the creaking steps, walk back and sit on a green vinyl bench. This machine has long ceased its movement; he is tanned and immobile, a shipwreck on wheels. But you can still feel it. That gentle rocking motion of long ago as the bus pulled away from the stop. The whistle of tires on rain-wet streets and the flashing neon signs. The faces of your traveling companions, foreign, yes, but always familiar. A passenger, en route from here to there.

This is a Brill trolleybus, one of a dozen that have found their way into the weirdest places. There is little need for public transportation in the small town of Sandon, British Columbia. With a population of 5,000 at its peak in the 1920s, only a handful remain today. It’s a ghost town, with a preserved general store, hydroelectric generator, town hall, and some of the original buildings.

A huge steam locomotive doesn’t look out of place in this old frontier, but a bunch of post-war buses do. They group together like caterpillars in nymphosis, all the paint chipped and the bodywork slightly damaged. And yet, they are also all incredibly complete. The names on the destination sign are familiar to any Vancouver resident: the 16 Renfrew bus, the number 20 passing Arbutus.

Most of these routes still exist, now served by modern low-floor buses with extendable ramps. The 2022 buses are more sensible and accessible, but there’s more to these relics of the past than their art deco charm.

The first Brill entered service in Vancouver on August 16, 1948. A few years earlier, the BC Electric Railway had begun decommissioning its streetcars in an effort dubbed the “rails to rubber” program. BCER was originally the parent company of BC Hydro, and the Stave Lake and Buntzen Lake Hydroelectric Generating Stations were built to power electrified transportation for the citizens of British Columbia.

If you’ve ever smelled the smell of a gasoline-powered vehicle from the late 1940s or early 1950s, let alone a diesel truck from that period, you can see what a fleet of electrified trolleybuses was infinitely preferable. Internal combustion buses were also part of the plan, but these required a little more skill to change gears etc. When you look at modern efforts to electrify urban mobility solutions, city planners in 1948 were pretty forward thinking.

The move represented a considerable investment in the city’s infrastructure. Each Brill T44 costs $21,000, or about $275,000 in today’s money. The designation T44 indicates seats – 44 seats – and later the larger T48 made up the bulk of the fleet.

They were made in Canada buses. Built under license by Canadian Car and Foundry of Thunder Bay, the Brill T44 and T48 were a post-war example of the biblical “swords turned plowshares”. In wartime, Car and Foundry was responsible for building approximately 10% of all Allied Hawker Hurricane fighter aircraft. (By the way, the factory was run by pioneering aeronautical engineer Elsie MacGill – dubbed the Hurricane Queen for her efforts – whose indomitable spirit can best be expressed by pointing out that she drove to work in a Ford Model A with manual transmission despite wearing leg braces after a bout with polio.)

In January 1954, Vancouver had 327 trolleybuses, the largest fleet in Canada. But in the 1960s and 1970s, what had been a revolution in urban transport became just a bunch of old buses. The new Flyer trolleybuses arrived and began to replace the Brills as the latter wore out. Often, the new chassis cannibalized the powertrains of older buses.

In 1984, the last of the Brills took its last passenger to its destination. Next stop, terminal station. Almost all buses were sold for scrap. A couple was later rescued and restored by the Transit Museum Society of British Columbia.

But they never got to the scrapyard. The details are hazy, but the contract to buy Brills and shred them for raw materials ran into some kind of problem. Instead of the crusher, they sat in a yard, moldy.

For local transit enthusiasts, this was a pretty big deal. In the city, left in an unguarded yard, buses were easy targets for metal thieves and vandals. After such a long life, they deserved better. Another deal was struck, this time with the keeper of Sandon’s relics, a man named Hal Wright.

Half a dozen Brills were dispatched here, and more soon followed from various towns. In the 2000s, a plan was born to restore the buses and repaint them in different colors to represent the provinces. But that failed too, and today they are just a small-town curiosity, off the beaten path.

The Sandon Ghost Buses have completed their final mile. Tourists come and go, snap selfies for their Instagram pages, stop off en route to Nelson or Nakusp or a lakeside campsite in the Kootenays.

But if you sit quietly, you can still feel the thousands of travelers carried by these machines. The ordinary life they were part of every day, rain or shine, winter or summer. The slide to a stop. The slamming of doors opening. A friendly nod to the driver, and you’re out. Back at home.

Sign up to receive Driving.ca’s Blind Spot Monitor newsletter on Wednesdays and Saturdays

A welcome email is on the way. If you don’t see it, please check your spam folder.

The next issue of Driving.ca’s Blind Spot Monitor will soon be in your inbox.