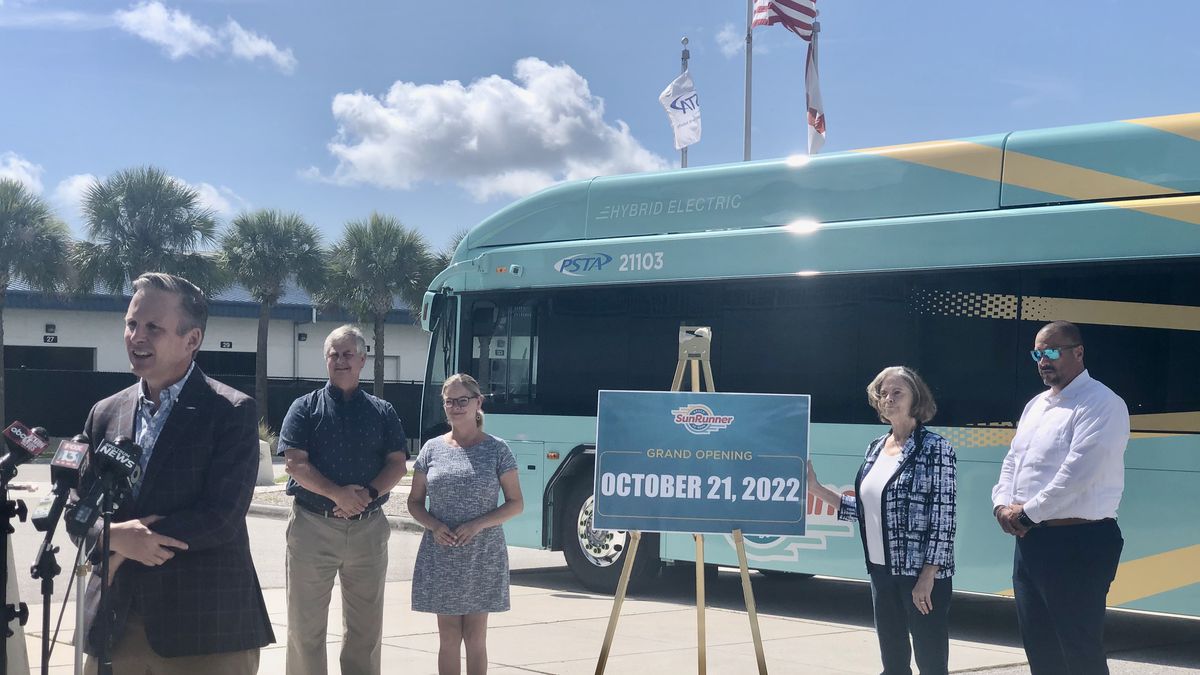 The SunRunner, a 16-stop line, will transport passengers between downtown St. Petersburg and St. Pete Beach in 35 minutes each way – about 30% faster than current bus service, according to Pinellas Suncoast Transit Authority. Riding will be free for the first six months of operation, then $2.25 one way.

“We think this will be a catalyst for other rapid transit lines that we put in place in Pinellas County and throughout the region,” Brad Miller, general manager of the transit agency, said Wednesday morning. in common of the county of Pinellas, in front of the headquarters of the agency.

Construction began on the 10.3-mile route in August 2020 and the project was originally scheduled for completion this summer.

Bus rapid transit is a term for a route that has its own dedicated lane, fewer stops, and faster boarding. It is billed as combining the capacity and speed of a metro with the lower cost of a bus system.

The SunRunner has garnered widespread support in an area long stalled by transit plans. Colleges, business leaders, local and state officials, and supporters of regional transit have championed the project as a step toward easing growing problems with congestion and harmful emissions.

“This is the beginning,” Pat Gerard, chairman of the Pinellas County Transit Agency Board of Directors, said Wednesday morning. “That’s what will work here.”

But the project ran into strong opposition in St. Pete Beach. Residents and elected officials objected to the original size of the buses and an earlier plan that had the route continuing to the Don Cesar Hotel. A revised route has him turn around at St. Pete Beach Park, near 47th Avenue.

Half of the funding for the $41 million project comes from federal taxes, a quarter from the state, and the rest from the Pinellas Suncoast Transit Authority and the city of St. Petersburg. Every dollar invested in public transit generates $5 in economic benefits, according to a 2020 study by the American Public Transportation Association.

We’ll bring you the latest news and information you need to know every morning of the week.

You are all registered!

Want more of our free weekly newsletters in your inbox? Let’s start.

Explore all your options

“There’s no excuse not to get on it,” Miller said at the announcement event Wednesday morning, Mr. Sun’s character beaming to the crowd. He hopes tourists and locals will give the SunRunner a chance. “And bring your bathing suit.”