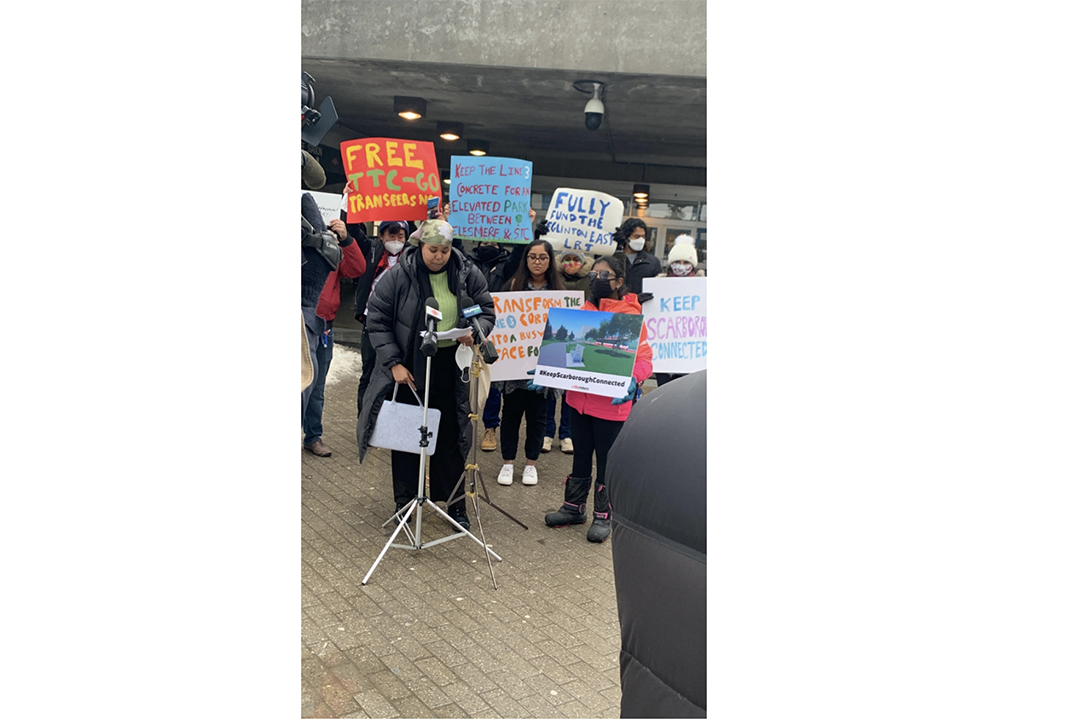 On February 2, a group of protesters gathered at Scarborough Center station to raise awareness and denounce the closure of the Scarborough Rapid Transit (SRT) system.

The decision to close the SRT was taken in February 2021 and is supposed to come into force in 2023. Plans include replacing the SRT with shuttles and then opening a subway replacement for the SRT in 2030. The plan to close the SRT, also known as the TTC Line 3, will have implications for Scarborough and regular Line 3 users who may have more complex commuting via replacement bus. The transit routes of many UTSC students may also be affected by this change.

Protestors at the event explained how Scarborough has often been overlooked in terms of public transport development. Executives from the Scarborough Students’ Union (SCSU) also attended the event, highlighting similar concerns.

Sarah Abdillahi, the president of the SCSU, explained that many buses are overloaded, which can prove harmful during a pandemic. “Now the underfunding and neglect of public transport is putting the lives of the most marginalized people at risk, with overcrowded buses preventing us from relying on public transport to practice social distancing while getting us where we must. come on, she said.

According to surveys conducted by TTCriders, an organization focused on improving public transit in Toronto, 63% of Scarborough residents were unaware of the city’s plans to close Line 3. Among survey respondents, 76% also believe dedicated bus lanes should be implemented in Scarborough so buses are not impacted by traffic.

In an interview with the university, TTCriders member Zain Khurram spoke on behalf of the organization regarding the issue of Scarborough Transit. “Scarborough has always been overlooked in terms of transit expansion. Places like North York, Etobicoke, [and] even York Region [are] get new subways. Where is Scarborough in this equation? It’s like we got canceled,” Khurram said.

TTCriders has made some recommendations on how the city can help the lives of Scarborough residents from a transit perspective. They recommended adding a bike lane in the SRT corridor, funding the Eglinton East light rail transit, expanding the SRT network, providing free transfers between TTC and GO transit, and more. .

Designated bike lanes are in high demand in Scarborough. They can reduce the amount of traffic on the roads and provide more transportation options for citizens.

Kevin Rupasinghe, Campaigns Director for Cycle Toronto, spoke about ways to improve transit in Scarborough if the SRT closes. Rupasinghe said: ‘I think Scarborough residents will have no options for getting around safely when the SRT closes. What we really need to see on top of transit priority measures is adding safe places for people to walk and cycle.