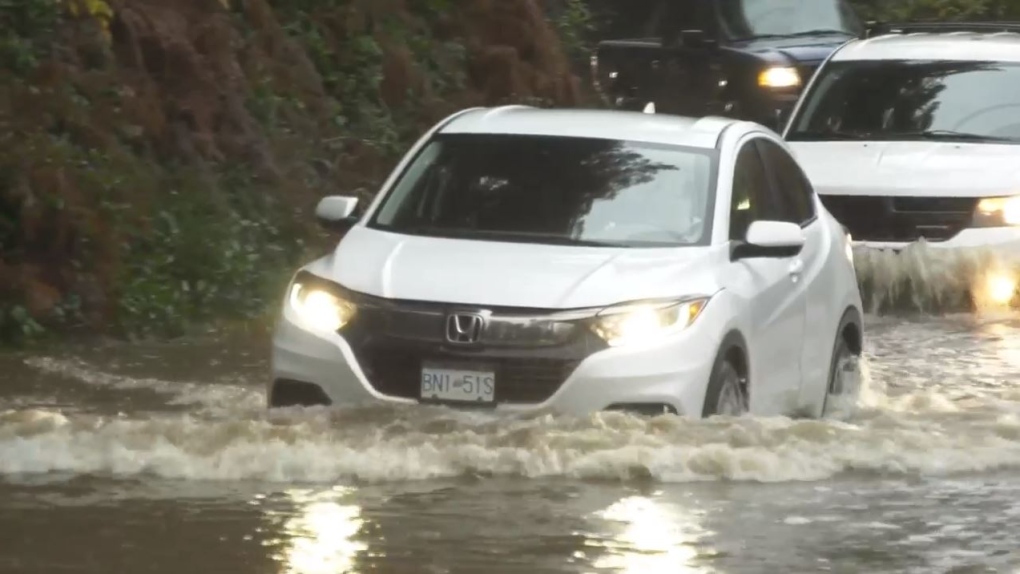 Relentless rain and high winds caused road closures and cancellations along some BC Ferries and BC Transit routes on Monday.

The Malahat highway was blocked in both directions in several areas due to flooding early Monday morning.

The highway was temporarily reopened as workers drained accumulated water, but the road was closed again before 11 a.m. due to instability concerns, according to maintenance company Emcon Services.

Some barriers along the highway shoulder gave way to flooding on Monday afternoon.

Although geotechnical crews are on site, the highway’s stability cannot be fully assessed due to water volumes, according to Emcon.

The Malahat Highway will remain closed in both directions overnight, with an update on road conditions scheduled for Tuesday at 8 a.m.

Northbound traffic was being diverted to Westshore Drive until road safety could be assessed, Emcon said.

Further north, the Trans-Canada Highway was closed in both directions north of Duncan between Mays Road and Mt. Sicker Road.

The affected section reopened on Monday evening, although traffic delays are expected.

The freeway was also washed out near the Crofton exit, where floodwaters had pushed the median into the traffic lanes.

The Trans-Canada Highway was washed out near Crofton, British Columbia, where floodwaters pushed the highway median into traffic lanes. (CTV News)

BC Ferries said two crossings between Nanaimo and Vancouver were canceled due to high winds on Monday.

Customers with reservations on board a canceled crossing will be placed on the next available ferry or have their travel purchase refunded, according to BC Ferries.

Meanwhile, several BC Transit routes in the Greater Victoria area were canceled or delayed on Monday due to extreme rainfall and, in some cases, road flooding.

Route number 50 in Langford has been cancelled, while delays are expected along routes 11 and 15, which go to UVic, the shipyard and the Tillicum Centre.

Delays also hit three routes in Sooke which use Sooke Road between Gillespie Road and Kangaroo Road. These roads have been closed to traffic except for buses, and concern lines 61, 64 and 65.

The ferry and bus cancellations come amid ongoing rain and wind warnings for most of Vancouver Island and the south coast of British Columbia.

The latest updates on BC Transit service can be found here.