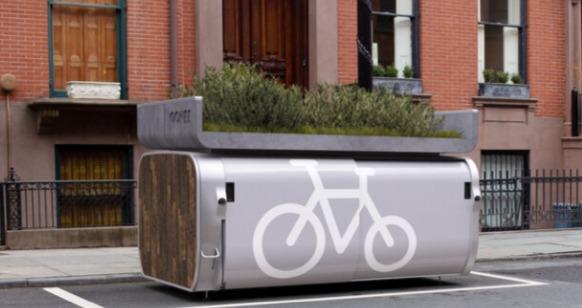 NEW YORK – Metro-North Railroad has announced that a secure bicycle storage pilot program is coming to Grand Central Terminal. In conjunction with Brooklyn-based Oonee, Metro-North will have a six-space secure bicycle storage unit installed in the former terminal ‘taxiway’ space at 43rd Street and Vanderbilt Avenue, with direct access to the west balcony of the terminal and the main hall.

The pilot program will run for a year and its launch is scheduled for November. The pilot is expected to include the launch of a secure six-seater bicycle parking area known as Oonee’s Mini. Use of the pod will require reservation through Oonee membership, which will allow users to unlock a private space inside the pod using a key card or smartphone. Reservations will be offered on a first come, first served basis. Oonee memberships are free to the public and anyone can register on the Oonee website.

â€œMetro-North understands the importance of sustainable transportation and sees the bicycle as a natural partner of transit in this regard,â€ said Catherine Rinaldi, President of Metro-North Railroad. “We are excited to be working with a local partner on this pilot project, which has the potential to be a game-changer to expand to more Metro-North stations as well as subway and LIRR stations throughout the New York area. . “

â€œSecure bicycle parking has the potential to dramatically increase the range of New York City subway and train stations by making it easier for customers to cycle to and from public transportation,â€ said Shabazz Stuart, Founder of Oonee. â€œAs a local company founded by public transport advocates and political leaders, we are delighted to partner with MTA on this historic pilot project which will bring high quality bicycle parking to one of the hubs. most important public transport in the region. We can’t wait to get started.

The installation and maintenance of the storage pods will be handled by Oonee. Through its customer service, Oonee Care, Oonee will take care of the maintenance of the storage pod and meet all customer service needs. The pod will have a free air pump with Presta and Schrader valves, hydraulic sliding doors for easy access to the pod, self-closing doors, and insurance coverage for bicycle and scooter owners.

The launch of Pilot Oonee follows news from Metro-North and Long Island Rail Road that bicycle permits are no longer required on trains as of September 7.

For up-to-date information on using your bike on MTA subways, buses, and commuter trains, visit new.mta.info/guide/bikes.