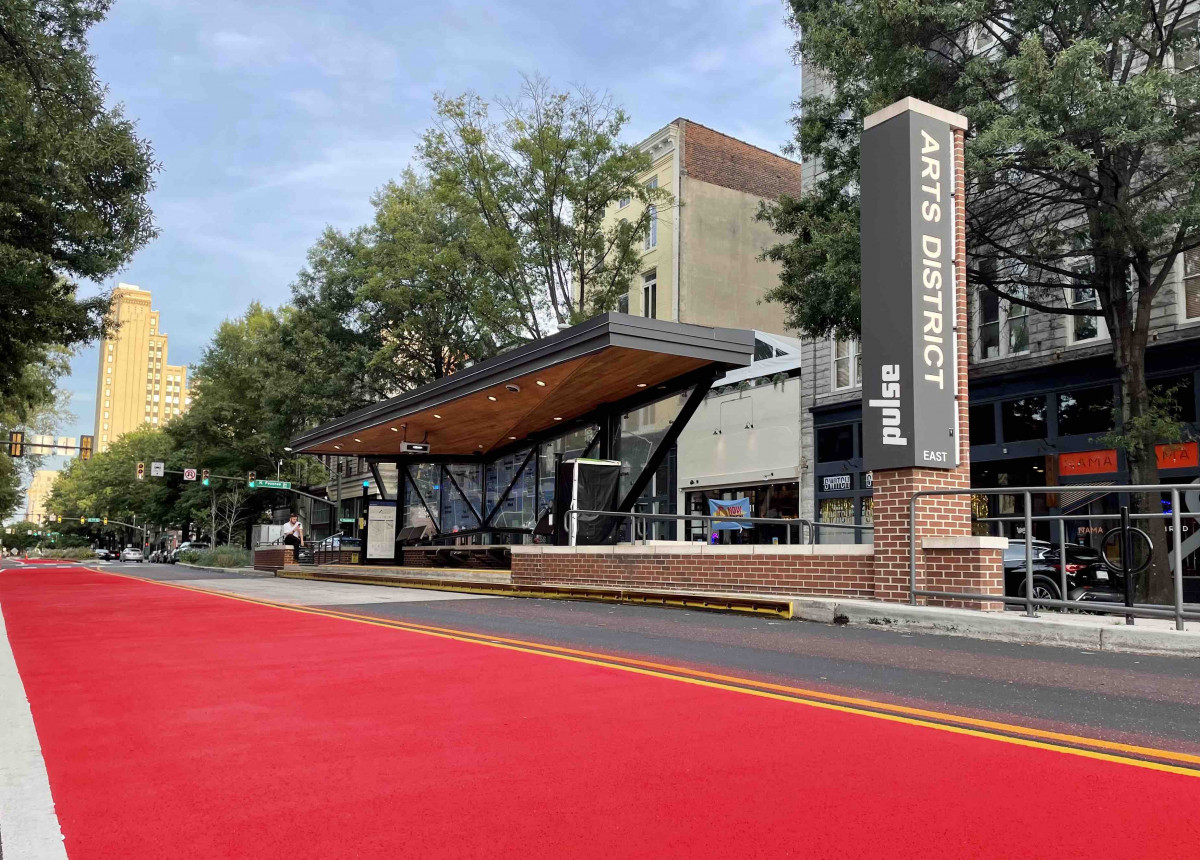 Boldly wearing white shoes at an event featuring red paint, Mayor Levar Stoney donned a helmet and fluorescent safety vest on Tuesday morning as he sprayed the first feet of the new red carpet treatment for the Greater Richmond Transit Company (GRTC) Pulse bus rapid transit (BRT). Rosslyn may have red stripes, but thanks to a $2 million grant from the Virginia Department of Railroads and Transit, the Commonwealth capital will be among the first in the state to install red lanes reserved for buses. The full extent of painting must be completed within 45 days.

The first calls for more clearly demarcated bus lanes along Broad Street came in 2019 following the death of Alice E. Woodson, who was hit by the operator of a Pulse bus as she got out of a car stopped at a red light at the intersection with Bowe Street. With bright red paint applied to the full length of the Broad Street bus lanes, from Thompson Street near Scott’s Addition to 14th Street downtown, the city hopes to prevent similar incidents.

“These new Pulse red lanes are for visibility and also for safety purposes,” Stoney said at the public paint event. “We want to avoid any future deaths, and we want buses to stay in the bus lane and cars to stay out of the bus lane.”

Richmond Office of Fair Transportation and Mobility Director Dironna Clarke similarly introduced the new red lanes: “This red paint symbolizes the city’s efforts to make the streets more pedestrian and transportation friendly. in common. We hope this will prevent accidents.

If the pilot program is deemed a failure, the red bus lanes will likely remain anyway. The methyl methacrylate compound used to turn freshly laid black asphalt a bright red is designed to last 12 to 15 years.

Although the administration’s comments focused on safety, the new red bus-only lanes along Broad should also increase the reliability and speed of the BRT route. However, two critical causes of bunching and delays for Pulse runners will not be resolved with this current red paint scheme.

Despite his statement at the painting event that the city’s infrastructure “should prioritize those who take the bus over private cars”, Stoney would not commit to expanding dedicated bus lanes. from the Pulse along 14th Street and along Main Street via Shockoe Bottom – the biggest problem for Richmond’s premier bus service. Not even a study is currently underway to expand bus lanes, according to Clarke. Instead, she encouraged residents to voice those concerns through the recently launched Richmond Connects transportation planning process.

The final issue for the Pulse Stoney would be not committing to solving the four parking spaces in the bus lane on the 300 block of East Broad Street. Although the parking spaces had never existed before and were only accidentally added to the street by a mistaken consultant when the Pulse was built in 2018, “the parking spaces in front of Code RVA remain due to the Pulse project leaving parking on Broad Street for corporate customers,” according to Clarke. “Again as part of Richmond Connects, we will re-examine whether transit needs outweigh parking needs for this block.”

Although the verdict on the extension of the ban and finally the complete abolition of car parking in the reserved bus lanes remains pending, public transport users themselves have already given a verdict on the new red lanes along Broad Street. As one runner put it on Tuesday, “That’s a good thing.”