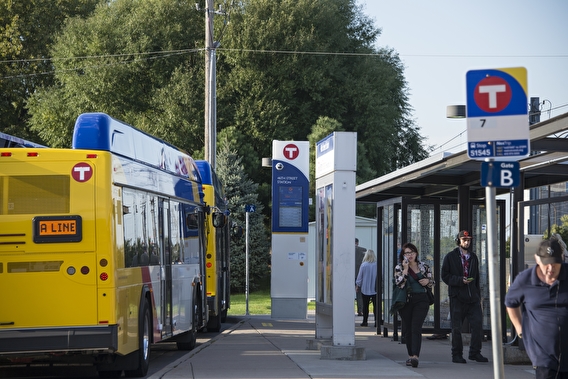 Bus rapid transit (BRT) has gained momentum in the Twin Cities as a cheaper alternative to light rail transit. However, this BRT expansion has also raised concerns that the new lines will spur an increase in housing values ​​and neighborhood gentrification, potentially displacing low-income residents. A new study alleviates those concerns: it found that the A Line BRT route encouraged ridership but had no effect on home values.

“We based the study design on a previous study we conducted that showed Green Line light rail led to increased property values,” says Humphrey School professor Jason Cao. of Public Affairs at the U of M. “We wanted to see if rolling out BRT lines would lead to a similar decrease in housing affordability, which could displace low-income residents along transit corridors. and limiting their access to opportunities, public transit and existing social networks.”

The BRT A Line entered service in mid-2016; it serves a nine-mile corridor in Ramsey County along Highway 51/Snelling Avenue, connecting the Rosedale Transit Center to the 46and Street Station on the Blue Line light rail. The main aims of Line A, which replaced three existing local bus routes, were to increase efficiency and speed by using traffic light priority and shortened intervals and to improve the passenger experience by adding station amenities like those found in light rail stations.

To determine whether the addition of Line A increased property values, the researchers performed a before-after analysis of home sales data, comparing the Line A corridor with two control corridors that were identified as future planned BRT routes in Ramsey County.

“After controlling for home price correlates such as number of bedrooms and floors, garages, and distance to downtown St. Paul, we concluded that Line A did not affect the value of homes. housing,” says Jack Lyle Benson, a graduate student in the Department of Civil, Environmental and Geotechnical Engineering Cao advised on the project.

This finding led researchers to ponder why the Green Line light rail had increased property values ​​while Line A had not – and they uncovered several possible explanations. First, the Green Line was supported by zoning changes and parking reductions, but no similar transit-friendly land-use policy was adopted for Line A. Additionally, a survey of the Fieldwork revealed that some motorists in the Line A corridor viewed the line as regular buses and failed to notice the service changes. Finally, line A can be considered less permanent than the light rail.

“The Green Line operates on railway tracks while the A Line operates in mixed traffic,” Cao explains. “As a result, homebuyers and developers may view Line A as less permanent than a light rail line and see paying a premium for potentially temporary access as risky.”

While the study results alleviate travel issues, Cao says it could signal challenges in meeting ridership growth goals in the future. “Line A exceeded ridership projections in 2017 without increasing house prices, so objectively it is doing what it was designed to do: serve the people who live in this area without destabilizing the housing market,” says- he. “However, without value enhancement and land development along Line A, reaching the target of 8,000 daily passengers by 2030 will be difficult.”

“It was a fun and interesting study to conduct and see the result [of]adds Benson, now a graduate engineer-in-training from MnDOT’s Metro District. “The question, while not overly complex, has many significant connotations for the future of public transport and residential life for the general public.”

Start the conversation to restore bus and ferry services