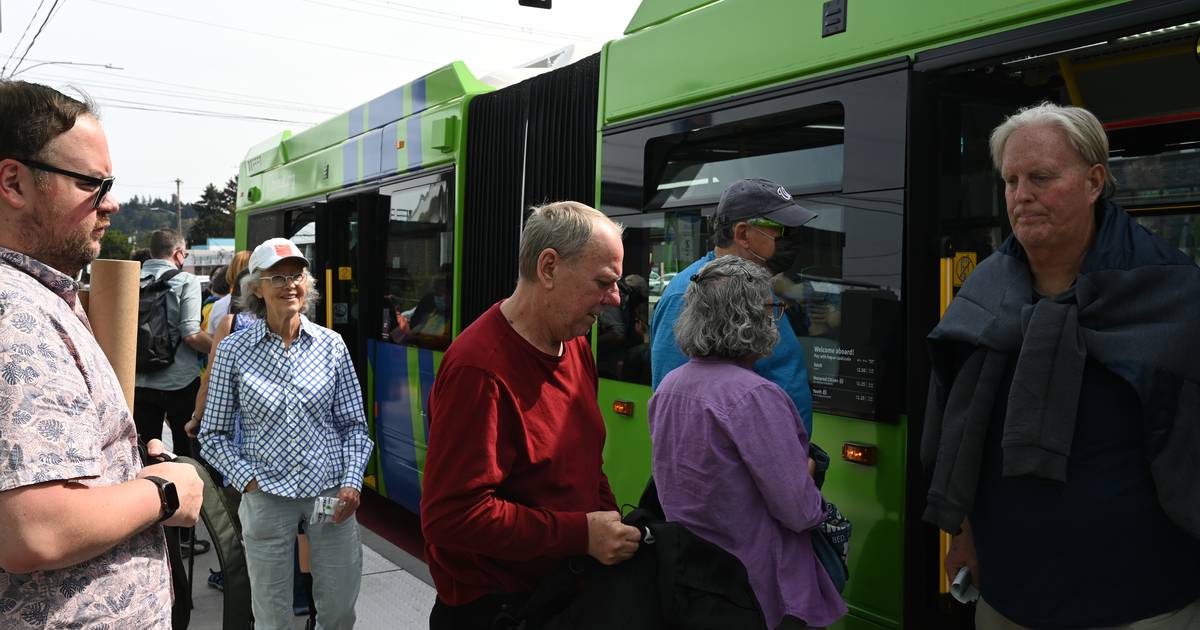 In the 1994 Hollywood blockbuster The rapiditySandra Bullock and Keanu Reeves take drastic measures to keep a city bus moving at at least 80 km/h: blowing red lights, jumping a drawbridge, crashing into a jet plane.

No such fiery drama was on view last week as state, city and county leaders gathered at Portland Community College’s Southeast campus to celebrate the arrival of the long-awaited row.” Bus Rapid Transit” from TriMet on Southeast Division Street.

But Keanu’s old dilemma – keeping the bus moving at base speed – lurked around the edges of the happy scene.

After nine years and $175 million, the Frequent Express 2, or FX2 for short, replaces the existing Line 2 with fewer stops, new 60-foot articulated buses and timed signals.

Officials announce the project as a way out of a difficult impasse that transit planners in the region currently face. As the population grew, ridership declined, which worsened traffic congestion. TriMet badly needs new projects like FX2 to attract cyclists with the promise of escaping traffic jams in state-of-the-art comfort.

That’s why TriMet promised that the new project would result in faster driving. A Q&A posted on its website in 2016 estimated a 15% to 20% decrease in travel times.

But in order to provide a faster ride, TriMet had to compromise.

The agency dropped plans to extend the road to Mt. Hood Community College, which would have attracted a new cohort of cyclists. It also changed the route to cross the inner divide after initial plans to use Southeast Powell Boulevard proved too slow and costly. And it closed dozens of bus stops along Line 2, including many in East Portland and Gresham.

For all that, it’s unclear just how much faster TriMet’s new bus line really is.

Due to congestion and other compromises imposed on the project by TriMet planners, the bus is not faster for all routes, WW found, especially compared to transit times when the project was first announced.

In 2013, it took at most 66 minutes to travel from the Gresham Transit Center to the Taylor Street stop in downtown Portland.

It now takes 67 minutes to use the new rapid transit line during peak hours.

“It’s really hilarious,” says Kem Marks, a transit advocate who sat on the project’s steering committee in 2014. “The goal was to get people going farther and faster.”

Granted, Line 2 has gotten slower in recent years as the division has grown and the pandemic has sent commuters back to their cars. FX2 offers relief, said TriMet spokeswoman Roberta Altstadt. “FX offers faster rides for the vast majority of riders,” she says, pointing to the section of the route between 82nd and 162nd avenues southeast, which is now 29% faster than the local line. .

But in response to questions from WW as to whether the line met its speed targets, TriMet said it had “strayed” from the 20% claim. The agency no longer has a contract with the company that made that estimate and was unable to update it, Altstadt says.

In fact, TriMet no longer wants the line to be called “Bus Rapid Transit,” even though that’s how it referred to the line in its federal grant application and in 2020 promotional materials on its site. website.

The term is notoriously difficult to define. People associate BRT with dedicated bus lanes, says Altstadt, which FX2 only has in limited places.

In 2009, Metro regional government planners brainstormed options for expanding high-speed transit in Portland. They made a short list. At the top was the Highway 26 corridor in East Portland.

Rather than chasing the billions of dollars needed to build the light rail — as the agency unsuccessfully tried to do in 2020 when it tried to raise money to build a new line to Tualatin — planners focused on improving buses. They would be faster to build and cheaper.

Metro then assembled a steering committee of 22 local politicians, decision makers and community advocates. They spent two years working out the details with TriMet planners.

The committee quickly agreed on a “preferred” route, which would extend the line from Mt. Hood Community College to the South Waterfront. The key to the route’s success, committee members said in a summary of the meeting, was “significantly faster travel.”

Achieving this goal, planners quickly realized, was going to be a challenge. Despite the dedicated bus lane, the detour through the South Waterfront costs time. So did the buses that maneuvered down congested 82nd Avenue to get to Powell Boulevard.

Planners warned the committee that the new line is expected to be slower than the line it replaced, committee members said. WW.

To compete for a federal grant, TriMet needed the new FX2 line to go faster than the older Division Street Line 2 it was replacing, while staying on budget. So he removed the Powell Boulevard detour and, as a cost-cutting measure, scaled back the Mt. Hood Community College extension.

The result? Buses travel faster up and down the split, at least until they reach the detour over the Tilikum Crossing Bridge or freight traffic on the Pacific Union lanes.

But these advantages come at a cost: the bus stops have disappeared.

TriMet planners took the criticism seriously, but stressed that speeding up the bus was necessary to secure federal funding. Without removing the stops, Calcagno recalls, “there wouldn’t be a rapid transit line because we wouldn’t have federal funding. The testimony was somewhat questionable.

TriMet says the eliminated stops had minimal effects. “All but 1% riders will find a station within a few blocks of their current stop,” the agency says.

But Gresham’s blocks can be long and lost saves had a big effect on John Bildsoe’s home. He represented the Gresham Coalition of Neighborhood Associations on the steering committee and lives next to one of the eliminated stops. Before FX2, her kids walked to the bus stop to get to PCC and Portland State University.

But that stop is gone and the result, at least for the Bildsoe family, is fewer bus passengers.

“I find it cheaper and faster to get cars for my kids,” says Bildsoe.

Vivian Satterfield, who served on the committee and is now director of the nonprofit Verde, explains why she ultimately backed the compromise. “I will never vote against public transit,” Satterfield says, “especially when this region is looking to increase its transit capacity by applying for federal funds.

But some aspects of the final proposal still bother her. She thinks the lack of dedicated bus lanes the entire route and the decision to steer away from Mt. Hood Community College and Powell Boulevard are going to be significant barriers to increasing ridership.

“We need people to use public transit,” says Satterfield, but she remains “skeptical” that the new line will attract enough ridership to “show the success” of the BRT concept.

For Duncan Hwang, director of the Asian Pacific American Network of Oregon, the benefits of the project go beyond just a faster bus.

“When viewed holistically as a community development project rather than just a transit project, we have achieved real benefits for East Portland,” he says.

He ticked off the victories: the construction contract for the project was awarded to a majority black company, Raimore Construction. New sidewalks and lighting have made Division Street safer and more walkable. Mt. Hood Community College also won concessions, including faster service on a nearby bus line.

On a recent Friday afternoon, commuters on FX2’s 4523 bus said they were pleased with the new service. The buses were clean and spacious – and at least a little faster.

Jason Rohman was returning from his job at an environmental restoration company in Tigard. The new route had cut his commute by six minutes, he said.

That afternoon, Todd Pomerening was behind the wheel. He used to drive the line when it was a local route and said the new express service was an improvement.

The biggest complaint he heard from riders was the eliminated stops.

“Overall, I think it’s going to be a lot better,” Pomerening said, “at least once people get used to it.”