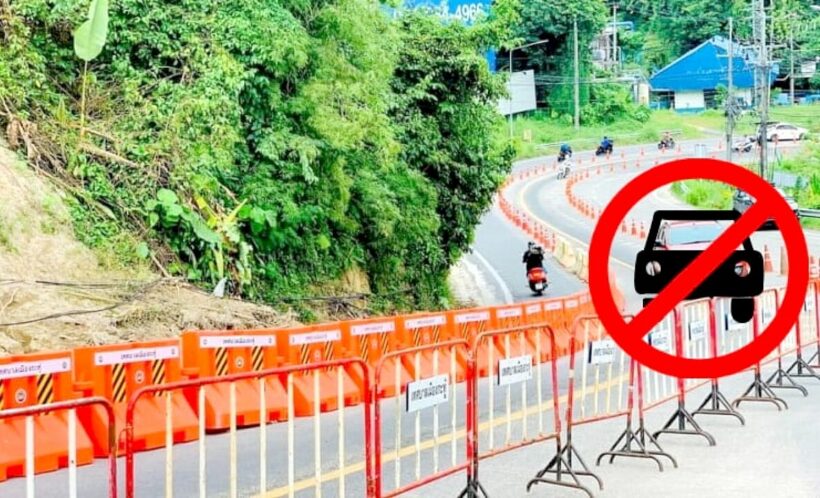 Heavy rains continuously closed the road between Patong and Kathu in Phuket. The road was once open to pedestrians, then to motorcycles only, before reopening to cars. But now the road on Patong Hill was firm to cars again, starting early this morning due to road repairs and ground shifting.

The announcement was made late last night when Patong Municipality took to Facebook to post a notice at 10.50pm. The declaration took effect almost immediately, with Phra Barami Road – Route 4029 – being closed to vehicular traffic just over an hour later at 00:01.

The municipality said in its message that the soil under the road plagued by rain erosion and landslides had shifted further. Officials feared the road was unstable and deemed it unsafe for cars to travel. The road closure above Patong Hill will only prohibit private cars from traveling the path. motorcycles and foot traffic will still be allowed on the crossing.

There is also a special lane on the road above Patong Hill designated for vans, vans and similar cars. This route is the farthest from the damage, so these types of eligible vehicles may still be permitted to ascend the mountain pass according to the Phuket News.

But after closing at midnight this morning, there is no fixed closing time. Officials did not mention a date or time when they aim to reopen the road to all through vehicles.

The Phra Barami road linking Kathu and Patong has been a weak point in Phuket’s infrastructure which has suffered from heavy rains in recent months. It was first closed due to damage and landslides nearly a month ago on October 19. Road workers were able to clear and stabilize the pavement enough to allow motorbikes to pass in both directions over Patong Hill a week later, starting October 26.

On November 4, small cars were finally allowed through Patong Hill. And just two days ago, the road was fully reopened to vans and pickups. But the Patong Municipality Facebook post restricted that again.

“For the safety of motorists traveling up the hill from Kathu, the road will be closed to cars from 12:01 a.m. on November 12. Only motorcycles will be allowed to pass.