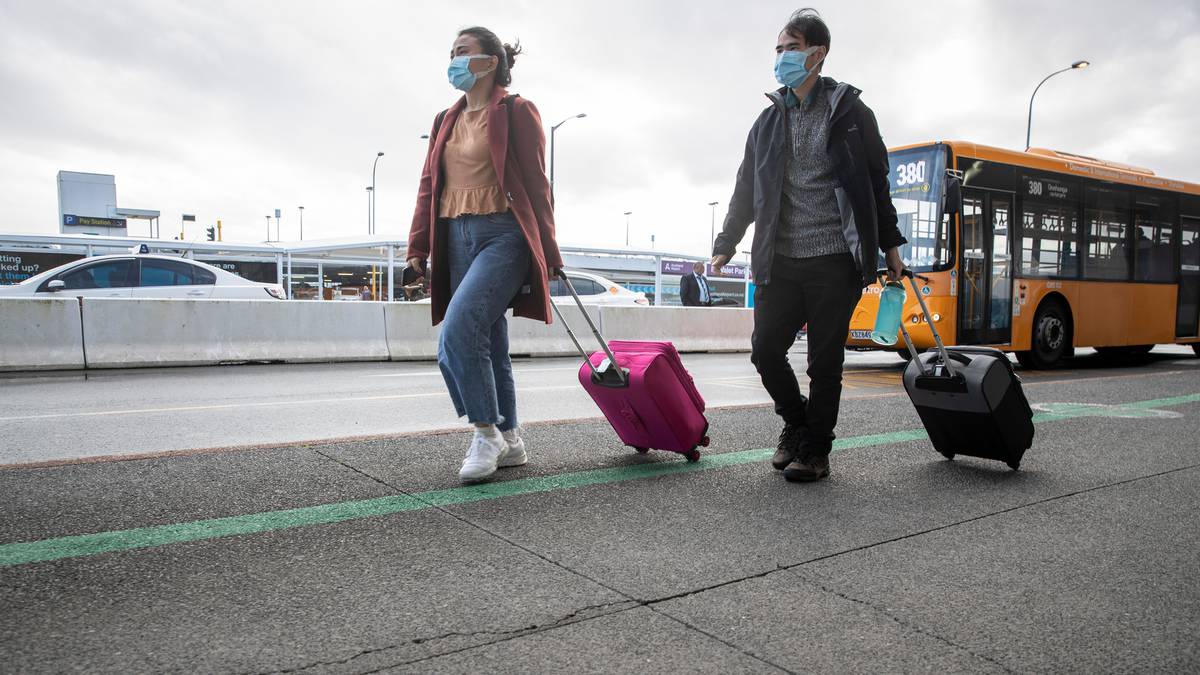 The government in hot water with the Waitangi Tribunal, festival-goers testing positive for Covid and the Brian Tamaki saga continues in the latest headlines from the New Zealand Herald. Video / NZ Herald

Auckland Airport’s Domestic Terminal has been identified as a potential exposure site by the Department of Health.

In the latest update just after 6 p.m., the airport was added to the growing list. A person infected with Covid-19 was at the airport on Saturday between 4:45 p.m. and 5:15 p.m.

Anyone who was at the scene during this time should self-monitor for symptoms.

As of 5 p.m., a number of potential exposure sites have been identified, but none are considered high risk or linked to a case of Omicron.

Earlier this afternoon, the uniform shop of a major girls’ school in Auckland was identified as a place of interest by the Department of Health.

The Westlake Girls’ Uniform Shop in the Wairau Valley was visited by an infected person on Saturday between 11.12am and 12.15pm.

Anyone who was inside the store during this time is urged to self-monitor for symptoms and get tested if necessary.

Christchurch Airport was also added to the list at 4 p.m. It was visited on Monday for half an hour from 9:10 a.m.

Meanwhile, a private event in South Auckland has been added to the Department of Health’s Places of Interest page. The people who were there are considered close contacts of a Covid case.

The office manager at the center said the room had been rented for a private reception related to a wedding ceremony.

He said a traditional Punjabi Jago ceremony was held on Friday evening.

The Jago ritual involved the parents of the groom and the bride celebrating the marriage with dancing and feasting.

The center had not been informed by the health authorities of the link with the person infected with Covid, but the building was cleaned up after each event, said the manager.

The Department of Health released five new places of interest at 3 p.m.

Details of the SoundSplash Festival in Hamilton, which was posted as a place of interest this morning, have been updated.

None of the venues published at 3pm have been linked by the ministry at this stage to Omicron matters – except for the music festival.

An infected person visited the music festival between 6 a.m. on Friday January 21 and 9:15 a.m. on Sunday January 23.

Anyone who was at Soundsplash during this time should self-monitor for symptoms and get tested if necessary, as this location has been exposed to an Omicron case.

“If symptoms develop, get tested and stay home until you test negative.”

Meanwhile, a number of new landmarks in Auckland have been released.

Anyone who has visited the Tauranga gym must self-isolate and get tested.

Meanwhile, two new places of interest were added to the Department of Health’s list at 2 p.m.

A restaurant in Auckland Central and a gym in Tauranga are the latest sites linked to Covid cases.

CityFitness Fraser Cove in Tauranga has been linked to a suspected case of Omicron, who visited on January 25 between 10 a.m. and 12 p.m. People who are there at the same time are considered closed contacts and should self-isolate and get tested immediately, as well as on Day 5.

The Chamate restaurant in Auckland Central has also been listed as a place of interest, but health authorities have not said whether the site is linked to an Omicron case.

People in the restaurant on January 20 between 2:38 p.m. and 4 p.m. are close contacts and should self-isolate and get tested immediately and on Day 5.

Details of the previously announced exhibition event – flight NZ5077 from Auckland to Nelson on January 16 – were also updated this afternoon.

The current advice for those on the service to Nelson, which is linked to an Omicron case, is to self-isolate and get tested immediately and on Day 5.

Health authorities have not said it was linked to a case of Omicron, but it is considered a “high risk” event and people should self-isolate and get tested.

A KFC restaurant in Tauranga is the latest place of interest linked to what health officials say is a probable case of Omicron.

The Department of Health has identified KFC Tauranga – at 449 Cameron Rd – as being linked to a case of Covid which was there last week on Thursday January 20, between 5pm and 10.16pm.

“This exposure is related to a probable case of Omicron. Isolate yourself, test immediately and on day 5 after exposure to this location of interest.”

Two other places of interest were posted at midday: the Miter 10 Mega store in Mt Wellington, Auckland, and the Pizza Hutt on River Rd, Flagstaff, in Hamilton.

However, they are not labeled as being related to Omicron cases.

Earlier, the Sound Splash Festival in Hamilton was added to the official list and showed those affected were potentially exposed to a Covid case for just over 51 hours.

Two places of interest in Queenstown – including the airport – have been linked to suspected cases of Omicron.

Both exposure sites are believed to be linked to suspected cases of Omicron at this stage, the ministry said.

People who were in either location during the affected times are urged to self-monitor for Covid symptoms for 10 days after being exposed and if symptoms start to appear, get tested and stay home until a negative test result comes back.

Members of the public are urged to continue to check the Ministry of Health places of interest page as more exposure events are linked to community cases of Covid.

More places of interest are expected to be released by the Department of Health this morning and throughout the day as the fight against Omicron intensifies.

Six exposure events – including bus rides, a women’s gym and a cafe in Rotorua – have been identified.

None of the locations have been linked to Omicron cases at this point.

If authorities later discover that a particular exposure event is linked to a person who tested positive for Omicron, the Department of Health will update the status of that location accordingly; as well as advising people who were there on what to do.

Of the named exposure sites, four have been labeled as “close contact” sites, meaning anyone who was there at the relevant time is considered a close contact of a Covid case.

“Self-isolate, test immediately and on the fifth day after exposure to this location of interest. Further isolation and testing requirements will be provided by Public Health,” the ministry said.

A second bus ride from Lynfield Youth & Leisure Center in Mt Roskill (bus 25B from stop 8913) to The Civic in downtown Auckland is also an interesting close contact location.

A return trip on the same 25B bus to Lynfield Youth & Leisure Center is also affected on the same day between 6.30pm and 7.15pm.

Anyone who was there last week, Wednesday, January 19, between 7:45 a.m. and 8:15 a.m., is asked to self-isolate and get tested immediately.