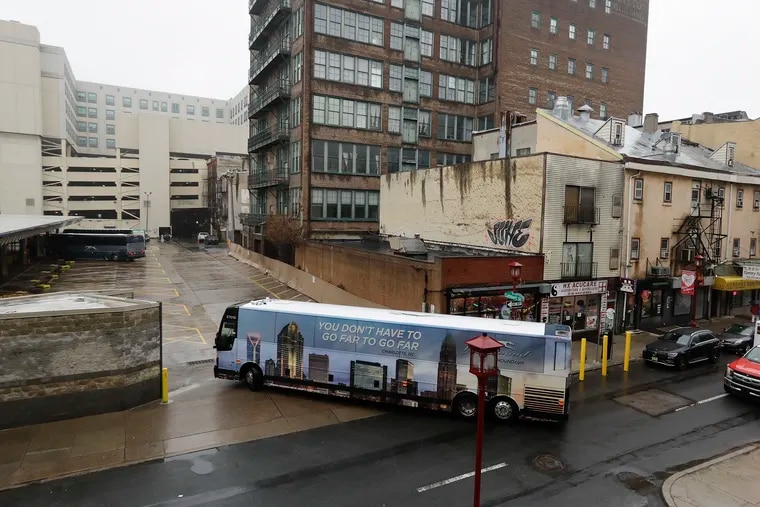 NJ Transit has rerouted five bus routes serving downtown Philadelphia due to “unsafe” conditions caused by changes in traffic flow at the Greyhound Terminal where its buses picked up and dropped off passengers.

As a result, some inbound commuters from South Jersey must be transferred to other NJ Transit routes in Camden at the Walter Rand Transportation Center hub.

A sixth line, the Route 551 express service between Atlantic City and Philadelphia, instead drops customers bound for the Greyhound station one block south at 10th and Market Streets. It also makes stops on Broad and Vine streets before heading east again.

Greyhound changed the entrances and exits to its station in late February, apparently to accommodate the loss of access to an empty paved lot at 1018-24 Arch St., which bus drivers had used for years to make turns smoother to and from a facility. surrounded by narrow streets.

The property was sold to an unnamed developer in 2019 in an $8.4million deal, but little had changed until recently when it was boarded up, according to neighbors. On February 28, NJ Transit began stopping and starting routes 408, 313, 315, 317and 409 in Camden.

Indeed, the move stopped daily single-seat bus trips to and from Philadelphia and places such as Cape May, Wildwood, Asbury Park, Millville and Trenton – not to mention the interruption of direct service from many cities around the world. South Jersey in between.

According to NJ.com. ”My journey has become unbearable, I have to coordinate between two buses and a [SEPTA] cart,” Pitman’s Laura Schultz, who works in University City, reportedly said. “I don’t have a car and rely on NJ Transit.”

Philadelphia did not have a centralized location for intercity bus service, instead dispersing it to different halves of the city. Greyhound and Peter Pan still use the Filbert Street Terminal, although it is small and has been described as a bunker. Meanwhile, low-cost carriers such as Megabus depart from street stops near the 30th Street station, with no shelter for waiting passengers.

A senior NJ Transit executive said Greyhound implemented the changes, which were first proposed last November, without warning or responding to safety concerns raised by the agency.

Greyhound strongly disputed the suggestion that the new traffic pattern is unsafe, but the company did not respond to specific questions about why access to the Arch Street lot is now blocked.

A representative for the owner of the land, listed in city real estate records as Arch Street Realty, LLC, could not be reached for comment. The new owner was described as a private local investor whose development plans had not yet been completed in a January 10, 2019 press release from the brokerage firm Marcus & Millichap announcing the sale of the “Greyhound parking lot”.

Crystal S. Booker, spokesperson for Greyhound, said in a statement that the bus company had put the traffic plans through “multiple rounds of testing to ensure operational safety and efficiency” and approved them with the city. Our adjustments successfully meet the desired requirements, providing plenty of boarding space for customers and a clear line of sight for drivers,” she said.

But NJ Transit senior vice president Mike Kilcoyne, general manager of bus operations, explained the decision at a March 30 meeting of the agency’s board of directors. He said the space crisis has reduced the doors available to NJ Transit at Greyhound Station on Filbert Street, and traffic patterns also potentially endanger its drivers, other employees and passengers.

A bend between Arch Street and the new 10th Street entrance is too tight, “forcing buses to take the curb or sidewalk” to complete it, Kilcoyne said, according to to a recording of the NJ Transit board meeting. (It starts around 6:40 p.m.) He also argued that there was no “proper boarding area” for his customers, which could require passengers to stand in active bus lanes, among other concerns.

Passengers can transfer in Camden to other buses that serve the city at no extra cost with a “continuous trip” ticket, Kilcoyne said: routes 400, 401, 402, 410 and 412. And the 551 express still goes direct to Philadelphia, but not at the Greyhound station.

Here’s who has the best cars