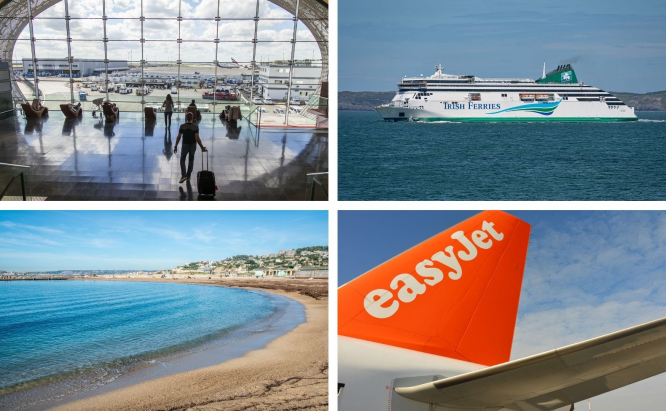 We take a look at the stories surrounding travel to, from and around France this week.

1. Railway and airline strikes planned for the coming weeks

Passengers traveling by rail and air could be hit by strike-related disruption in the coming weeks as SNCF, Ryanair and airport workers plan industry action.

The action, which also caused disruption yesterday (June 30), forced the airport to close some of its runways.

Read more: Many Parisian flights canceled due to strike by airport employees

The strikers demand the revision of their salary scale, taking into account “the difficulties of recruitment [staff] on the bottom of the scale “.

Airport workers have also been called to join a ‘multi-sector’ strike starting today and which could last until Sunday (July 3). Demonstrations are planned in front of Terminal 2E Charles de Gaulle and Terminal 4 at Orly, and passengers should expect some delays.

The staff of Aéroports de Paris, which manages these two airports, are demanding a salary increase of 6%, applied retroactively from January, while management is currently offering 3%.

SNCF workers were called to strike on July 6 – just before schools closed for the summer – over wages.

“Faced with rising inflation and having had no [salary] increase since 2014″, the unions CGT-Cheminots, SUD-Rail and CFDT organized the mobilization after “the bosses refused to receive [them]” for interviews.

British Airways ground staff at Heathrow Airport have voted to strike amid calls for a 10% pay rise.

The strike – organized by the Unite and GMB unions – will take place this month if an agreement is not reached.

If the action continues, it may lead to disruption of flights to or from France.

However, Ryanair claimed that the disruption caused by the strike had been minimal.

The SNPNC is calling for cabin crew to be allowed to eat and drink during flights and said: “If there is no reaction from bosses and government authorities, we will continue to strike.

“The conflict will continue all summer.”

The strike call has no set end date, so employees could act at any time during the summer.

This is partly because airports asked airlines to limit their flights after deciding they were expecting more passengers than they could handle.

EasyJet has reduced its schedule by 10% for the next three months, The Guardian reports.

Apart from Marrakech and Pula, all of these destinations are served by more than one flight per day, so cancellations do not have to mean passengers have to wait days to travel.

EasyJet flights will also be affected between:

3. Irish Ferries celebrates the first anniversary of the launch of the Dover-Calais service

This week, Irish Ferries celebrated one year of its Dover-Calais route, which launched on June 29, 2021.

The company now has three ships in service on the route: Inishmore Island, Innisfree Island and Inisheer Island.

Nora Costello, Marketing Director at Irish Ferries, said: “With the very positive feedback from passengers, we are proud to have become a serious operator in the Channel ferry market as we reach our first anniversary on the road.

“The recent addition of a third vessel on this route has enabled us to offer a departure from Dover or Calais approximately every 90 minutes.

“This will provide customers with even greater choice as well as the capacity, frequency and reliability of this essential connection between Britain and France.

“We look forward to welcoming passengers on board to experience our award-winning hospitality and service this summer and beyond.”

4. The EU will not fund the Bordeaux-Toulouse high-speed line project

The EU did not include the Grand Sud-Ouest Rail Project (GPSO) high-speed rail link between Bordeaux and Toulouse in its list of 135 projects that will receive funding.

The GPSO must draw 20% of its budget – or 2.8 billion euros – from the EU to be able to finance the project.

Green MEPs oppose the plan because they fear it will damage ecosystems and biodiversity along the route.

Karima Delli, Green MEP and Chair of the European Parliament’s Transport Committee, tweeted: “This project is hugely expensive, unpopular and has little benefit. Let’s give priority to the modernization of existing lines!

We will not finance the GPSO project for high-speed lines Bordeaux-Toulouse/Bordeaux-Spain. This project is extremely limited, unpopular and has few advantages. Prioritize the modernization of existing lines!@PierreHurmic pic.twitter.com/FYpznTxmV1

However, the French government has said that the GPSO will still go ahead and a new request for funding will be submitted in September.

The environmental mayor of Bordeaux, Pierre Hurmic, who is strongly opposed to these plans, declared: “The State must now understand that it must stop this colossal project, which is useless and which will destroy biodiversity.

The line would cover 222 km and allow passengers to travel from Paris to Bordeaux to Toulouse in just over three hours. Currently, it takes at least four hours.

Air Transat has released its winter schedule, with flights from Montreal to Paris and Marseille and more direct connections between France and the United States.

The Montreal-Marseille route began this year on April 8, but was originally scheduled to end on October 26. From now on, there will be up to two weekly flights until January 9, 2023.

Air Transat will be the only airline to offer this route. It also operates flights between Montreal and Basel Mulhouse, Bordeaux, Lyon, Nantes, Nice, Paris and Toulouse.

6. Marseille sets up a summer bus service for beach attendants

The town hall of Marseille has set up a special beach bus service for people wishing to spend a day at the sea this summer.

People who go to the Rond-Point du Prado metro stop will find a shuttle that goes every four minutes to the Plage du Prado two kilometers away. The bus will be labeled ‘The beach bus’.

This is accompanied by the doubling of the 83 bus lines to the Corniche beach.

In this way, the city hopes to avoid car congestion and parking problems around the beaches, which are expected to welcome two million visitors this summer.

The operation will cost 6.3 million euros.

seven. 74% of French people are planning a vacation this summer

After two years affected by Covid restrictions, the French are more eager to go on summer holidays this year than they were before the crisis, according to a new study.

Insurance company Europ Assistance and research firm Ipsos have found that 74% of French people intend to go on holiday this summer, up 5% from 2019.

However, some 23% of respondents have not yet decided where to go, and 55% have not yet booked their tickets and accommodation.

The budget people are expected to spend on their holidays is bigger this year than in 2021, with an expected average spend of €1,806 (+11%). However, this amount is €400 less than in 2019, as 72% of respondents say they are concerned about the impact of inflation on their finances.

Some 26% of respondents said they would not go on holiday this summer, either because they could not afford it or because they wanted to save money.

Summer strikes and cancellations: what to expect at French airports

Covid France: Wear a mask on public transport, says the Minister of Health