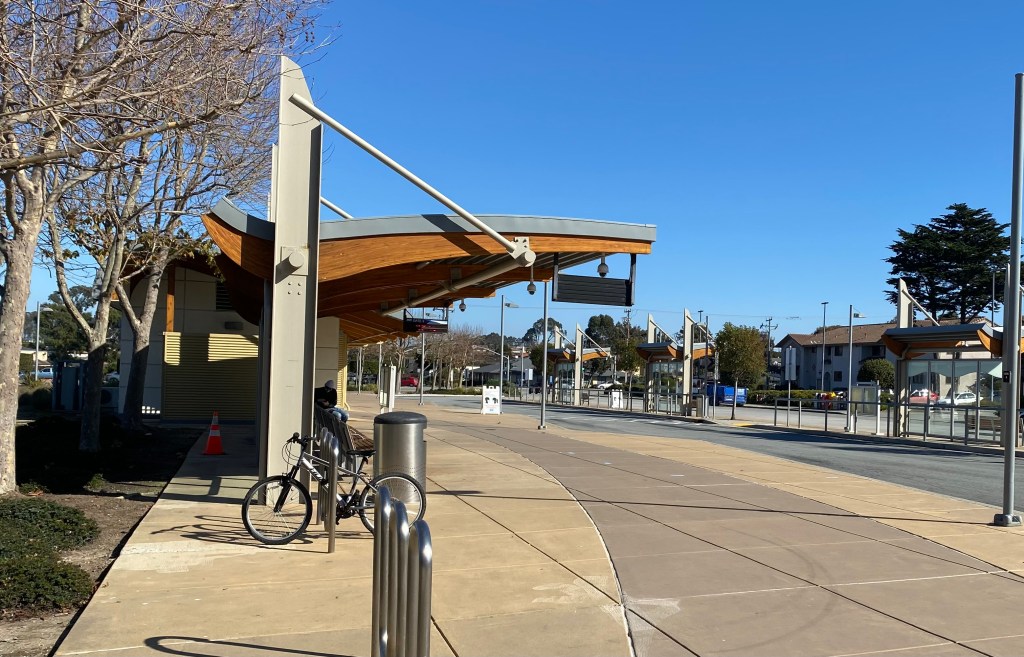 MARINA — The Federal Transit Administration recently announced that it has sent a $405,000 grant to Monterey-Salinas Transit to fund transit-focused development studies along its Surf! Busway and bus rapid transit project between Marina and Sand City.

The Monterey-Salinas Transit Board has approved the proposed Surf! Busway and Bus Rapid Transit Project, a dedicated bus lane off Highway 1 between Marina and Sand City, in July 2021. The federal grant provided was awarded under the Federal Transit Administration‘s pilot program for planning transit-oriented development.

“This specific subsidy is intended to help the cities that will be served by the lines that operate on the Surf! Busway and (Bus Rapid Transit) to develop so-called transit-oriented development policies and programs to support the increased use of public transit, pedestrians, cycling and other alternatives to single-passenger vehicles,” Carl Sedoryk, CEO of Monterey-Salinas Transit, told the Herald. Tuesday. “So everything from various ordinances for parking to land use policies to high-density affordable workforce housing in and around transit stations, this grant will be used to help these cities identify strategies they might be missing.”

Sedoryk said the transit agency is preparing to embark on the final design stages of the project and begin a public outreach process within the communities that will be served by the project over the next year.

“One of the most persistent rumors I hear is that it’s sort of a bus route that only goes from Sand City to Marina and the buses turn around and that’s not isn’t that,” Sedoryk said. “What it is is a bus lane that all of our MST routes that are currently on Highway 1, and there are many, will be able to use to bypass traffic, whether the route stops at Sand City or continue to Monterrey.

Sedoryk said the Route 20 bus that runs from Salinas to Monterey, the agency’s busiest route, will benefit as well as other bus routes that cross Highway 1 between Marina and Sand City. He said the project will also benefit lines that use the bus rapid transit portion of the project while reducing traffic for those driving in their own vehicles.

“The bus rapid transit part is coordinated signals – the prioritization of traffic lights where buses might get a little hop over traffic like we have on Aguajito Road in Monterey right now,” he said. he declares.

Sedoryk said the policies funded by the grant are an important step in moving the project forward and will help ensure the project works best for the people it will serve.

“Having these policies in the works is important to our federal funding partners and they would like to have that in place before they provide us with a grant to begin construction,” he said. “As we will be relying on federal funds to cobble together funding for this project, having this grant in place helps tick that box that makes us more likely to be funded.”

After the Monterey-Salinas Transit Board approved the Surf! Busway and Bus Rapid Transit Project last year, the transit agency is currently working on how the project will be funded, tapping into various state and federal programs.

“Traffic, congestion and vehicle emissions have increased significantly along Highway 1 between Marina and Sand City,” Panetta said. “Fortunately, the MST Busway and Bus Rapidity Project will help alleviate these issues with its dedicated bus lanes. I am proud to report that the federal government is playing its part by providing significant federal funding to ensure the success of local transit projects.

The project is still in its early stages, Sedoryk said, but he looks forward to seeing the final results in the years to come.

“If this 20 (bus route) can go faster than traffic during commute hours, that in itself will entice more people to take the bus when they see it passing,” he said. “This project will make that happen.”