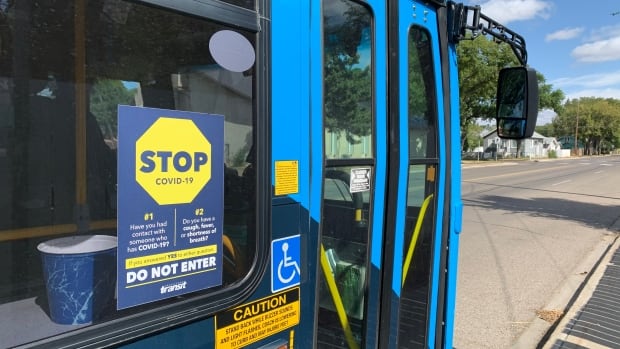 Masks on Saskatoon buses remain mandatory, but no enforcement planned

People boarding a bus in Saskatoon will need to keep their masks handy, even after the public health order expires on Feb. 28.

Most city councilors at a meeting of the governance and priorities committee on Tuesday, voted to maintain the status quo, while not supporting mask enforcement on buses with the help of police officers. security.

Saskatoon Transit will continue to focus on mask education and reminding passengers of the requirement through signs and announcements, according to the city. information report on the application of masks in the public system.

Operators were able to track non-compliance on their buses using the mobile data terminal (MDT), but drivers do not have to enforce mask use on passengers.

Free masks will continue to be available for people boarding the bus without a mask.

“A mandate without law enforcement is how we have operated our transit system, with respect to masks, throughout, including at times when it is outside of the public health order. “said Mayor Charlie Clark.

“This is another very imperfect situation where we know we want to do what it takes to keep our buses as safe as possible and as comfortable as possible for people traveling with respect to the transmission of COVID. -19, especially given the disturbing news that the number of sewage is still high.”

According to a spokesperson for Bus Riders of Saskatoon, the spread of the virus remains a concern during peak hours when physical distancing is difficult on buses with many passengers on board.

“We believe the overwhelming majority of transit riders support maintaining mandatory masking after the public health order expires,” Robert Clipperton said during his presentation to the committee.

The first time Saskatoon made masks mandatory on buses without an existing provincial public health order was on September 1, 2020. Saskatchewan did not introduce a province-wide mask mandate until November 6 2020.

However, the city council reintroduced the mask requirement for public transit beginning September 1, 2021, while the province did not reintroduce its mask mandate in indoor public spaces until September 17.

During the period of mask-only mandates for the city without the support of public health orders in place, there were no negative interactions regarding masks among passengers or involving the driver, according to city data.

During pandemic times when masks were mandatory on buses, the compliance rate measured by MDT in Saskatoon was 99%, according to the city.

Overall, between 2020 and 2022, 15 negative interactions between people on the bus related to mask compliance were reported during times when provincial masking mandates were in place for public spaces.

No physical assaults occurred regarding the masking, according to the city.

“While there is certainly some rift in society at large, when we look back, we’ve had remarkably few incidents of conflict,” Ward 7 Coun said. Mairin Loewen.

The other three options the committee was due to consider on Tuesday included increased enforcement measures, such as the permanent presence of security guards on all buses, the rotation of enforcement on problem routes or the placement of security personnel. security in transit terminals.

None of these possibilities were put forward as a motion by city councillors.

“We all share a concern about the possibility of conflict between bus users and operators,” Loewen said.

“Thinking back to other times when we’ve brought in outside security, for example transit terminals, those situations, those circumstances didn’t work out as expected.”

All were concerned about a potential conflict over the masking requirement without any measures to enforce it.

They also said runners could start applying it to each other.

“I think we’re asking for conflict on our buses,” Donauer said. “If we make masking compulsory on buses, we won’t be able to enforce it. I don’t think we have the capacity or the means to do it in a safe and effective way.”

Saskatoon does not have a bylaw regarding mandatory masks on buses, according to the city’s news report.

Tickets can only be issued under the current public health order, which is due to expire at the end of the month.

The involvement of the Saskatoon Police Department could result in delays or costs, according to the report.

Hill said there was masking fatigue.

And Kirton called warrants without enforcement laughable and dangerous.

“A recommendation without an app leads people to their own free will, and I hope some people and most people will understand the recommendation,” Kirton said. “But a mandate without enforcement leaves the choice to the riders.”

The evolution of intercity buses through deep technology