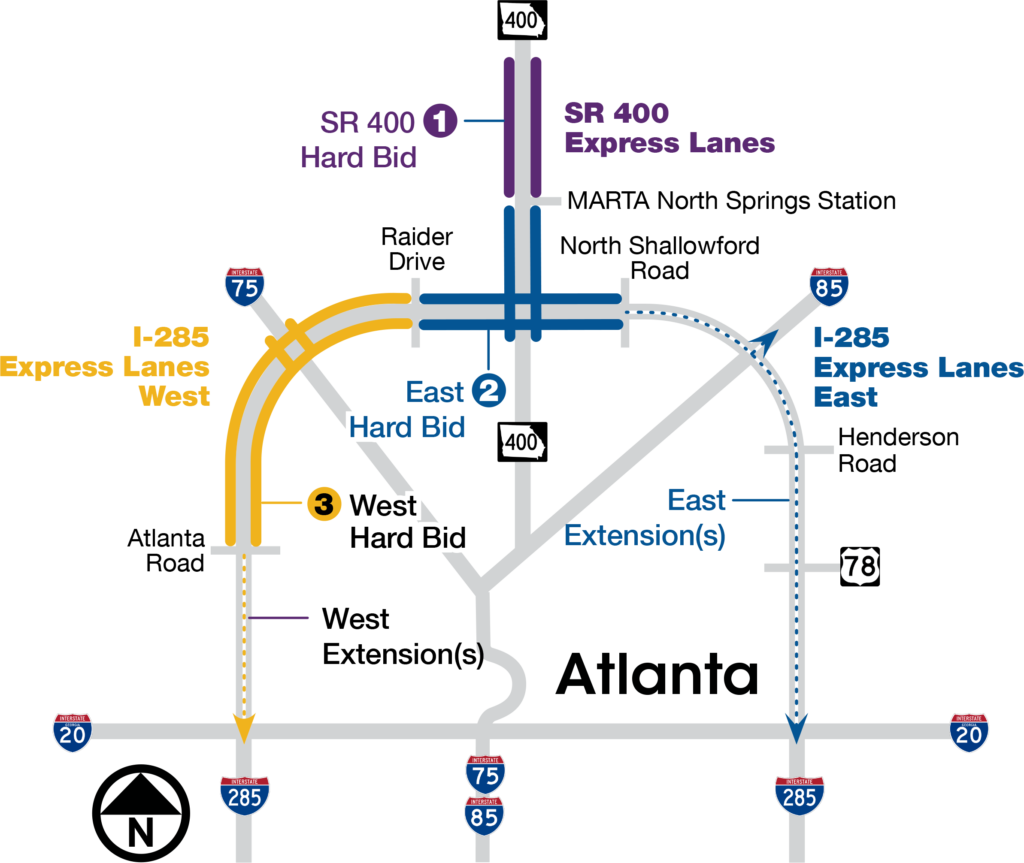 The possibility of bus rapid transit (BRT) service on new I-285 premium toll lanes will be explored by MARTA following a multi-government agreement signed on May 11.

The Georgia Department of Transportation (GDOT) is planning to add twin “express lanes”—Peach Pass using toll lanes—to 285 between the I-20 east and west interchanges, as well as part of Ga. 400, over the next 15 years. In 2017, Brookhaven Mayor John Ernst began convening officials from various upscale towns to discuss the possibility of adding transit services on or alongside these routes. This effort culminated in the study, which will include these cities as members of an advisory group.

GDOT and MARTA already have a separate agreement for BRT to operate on Ga. 400 toll lanes north of 285, although this remains in the planning stage with many details unknown. BRT refers to buses running in a dedicated lane, usually with limited stops, to make them as fast as possible.

GDOT said its toll lane design does not include public transit, but would not preclude its addition. The agency also said it would allow transit vans and buses to use the lanes for free.

The agreement authorizing the study warns that “GDOT does not guarantee that the BRT will be built” and that the final decision on any transit element “rests solely with GDOT”. However, GDOT Commissioner Russell McMurry in a press release came out strongly in favor of the concept.

“Transit along the I-285 corridor has to be part of our solution,” McMurry said. “This significant and historic opportunity for our region is enabling this crucial mobility expansion and Georgia DOT is eager to be a part of the process.”

The study will include connections to existing Hamilton E. Holmes and Indian Creek MARTA stations, according to the transit agency.

While a multi-government memorandum of understanding outlining the deal was officially signed on May 11, the deal has been in the works for months. The memorandum of understanding is dated March 9, and a separate agreement between MARTA and the Atlanta-Region Transit Link Authority (The ATL) authorizing MARTA to conduct the study is dated February 7.

Signatories to the MOU include the ATL, MARTA, GDOT, the Atlanta Regional Commission, and Cobb, DeKalb, Fulton, and Gwinnett counties. Cobb and Gwinnett are contributing financially to the study. DeKalb and Fulton are and weren’t originally included as signatories for this reason, but were added later after applying to join, according to MARTA. Each signatory is guaranteed “access” to any transit service that may be built.

The approved process, according to the memorandum of understanding, includes vision, scope, planning and a concept study “with associated public engagement and communications.” Details will include “station design and transit vehicle movements, access points, and entry and exit ramps.”

The process will include two advisory ‘working groups’, one technical and the other political. The Policy Working Group will include elected representative from the governments of Atlanta, Brookhaven, Chamblee, Clarkston, Cobb, DeKalb, Doraville, Dunwoody, Fulton, Gwinnett, Sandy Springs, Smyrna, and Tucker; ATL’s Executive Director or designate; the commissioner or designate of the GDOT; and the Managing Director/CEO of MARTA or his representative.

Any unspent money will revert to these sources on a proportional basis, according to the memorandum of understanding. If more money is needed, “good faith” discussions will follow on whether and how to obtain it.

GDOT has divided the high-end toll lanes into several separate projects with different phases for bidding purposes. Section 285 has three pieces, one of which confusingly includes a portion of Ga. 400. A request for proposals (RFP) for the 285/20 West interchange area is expected to come out later this year. The initial Section 285 East is slated for tender next year and Section 285 West in 2024. The separate Ga. 400 section is already in a tender phase, with selection of contractors expected l ‘next year.