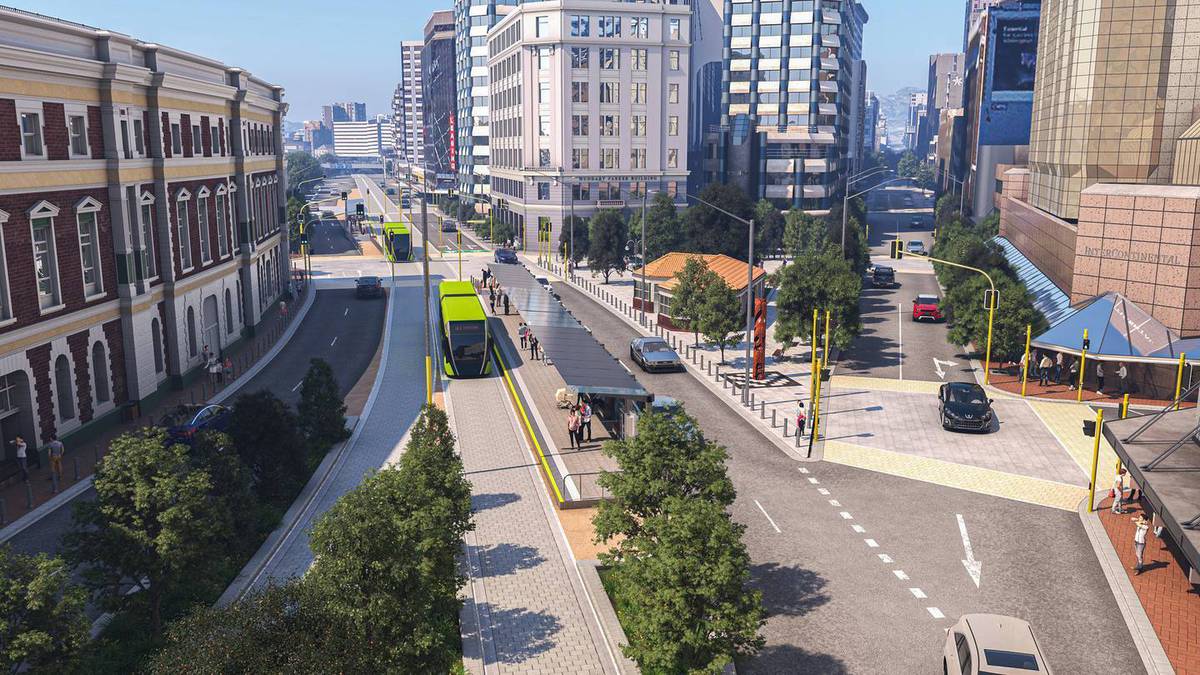 An artist’s impression of rapid transit in Post Office Square as part of Let’s Get Wellington Moving. Picture / Provided

The big reveal of Wellington’s transport plan has been delayed, pending a Cabinet decision, and may not provide a conclusive answer to one of the city’s biggest questions: light rail or rapid transit by bus ?

In the coming weeks, Let’s Get Wellington Moving (LGWM) must make a decision on what the plan for the city’s future transport network will be after four transport ‘options’ for the plan were presented last year.

All four options included some form of rapid transit (MRT), but they differ on the route it would take and whether the mode would be light rail, which has higher capacity but is more expensive, or public transit. rapid transit by bus, which is cheaper but has less capacity.

Wellington councilors were due to formally approve the final option at a full council meeting on June 30, it is understood.

But they were recently told by LGWM partnership board chairman Dave Brash that he now expects a ministerial announcement on the project at the end of this month.

“This will provide clarity on next steps for our partners, the program and, importantly, the wider community – and help your decision-making.”

A full council meeting has since been scheduled for July 6, during what is usually a winter holiday period for councillors.

Recently, however, there was internal uncertainty within LGWM as to whether selecting an “option” would permanently resolve the mode issue.

Key LGWM partners had raised concerns about whether the uncertain housing development forecasts could be used as a justification for light rail.

Ponter said LGWM suggested the light rail could enable 21,000 homes within a 10-minute walk of the MRT, but the council’s spatial plan only estimated around 14,000 new homes for the city center and nearby suburb.

“The housing scaling estimate you commit to will have implications for the viability of the MRT option we select,” he told Foster.

Ponter wrote another letter in late April this year to LGWM partners acknowledging the “cry of the public” for the transportation plan to go faster.

But he said the decisions must be able to withstand scrutiny in the future.

“We believe that solid information supporting the indicative business case is more important than just getting a decision before local elections.”

Ponter urged them to consider making a separate decision on the mode of MRT later this year, rather than under the preferred option to be announced shortly.

“Because poking several billion dollars out of an MRT system isn’t something you do on a lazy Sunday afternoon based on some raw numbers in front of you,” he told the Herald.

The two letters Ponter wrote were proactively released by the regional council.

The Herald understands that LGWM’s board is leaning towards selecting “option one”, although a formal decision has yet to be made.

The first option, as originally announced, included light rail through the city to the south coast, transport redevelopment around the basin reserve and a new tunnel through Mount Victoria with dedicated public transport lanes.

However, due to concerns over urban planning forecasts, this option is likely to include an ‘exit ramp’.

This would mean that the light rail at the heart of the project could be converted to cheaper bus rapid transit if housing along the route and Wellington’s growing population did not justify a more expensive, but more efficient light rail.

LGWM program director Sarah Gardner said an announcement on the preferred option for MRT delivery would be made in the near future, but did not say whether that would include the mode.

“These are important decisions that will change the way we move and live in Wellington and we are committed to working with our partners through this decision-making process.”

Wellington Mayor Andy Foster said there were reasons for the difference between the council’s urban development projections and those of LGWM.

These included the number of homes allowed versus the number they actually expected to build, the fact that the spatial plan has not yet taken into account the densification triggered by MRT stations and new rules for planning allowing three houses of up to three floors to spread the development rather than centralize it.

Regardless of those particular numbers, Foster shared Ponter’s concerns about the certainty of future population and housing projections and whether they could be relied upon for decision-making.

“The problem is that you have to be reasonably certain that you are going to attract enough people to the MRT catchment area to make either form of MRT financially viable.

Yakima Summer – The pools are open, the buses are running, the fun begins!