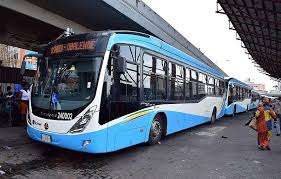 A statement signed by LAMATA Corporate Commission consultant Kolawole Ojelabi said the introduction of the buses would start today and reduce emissions to the atmosphere.

The statement said 10 high occupancy vehicles would be deployed for the pilot phase. He added that the number of buses would increase to 100 once data proves the sustainability of using CNG.

The buses were licensed to a bus operating company named Femadec.

The statement explained that the authority had been involved in studies to find alternative fuel energy sources in transport operations.

“The deployment of CNG powered buses will provide useful data for future decision on healthy wide use of these buses for passenger transport operations in Lagos.

The bus operating company is expected to have its operational base at Ajah Terminal and use the bus shelters along the Lekki-Epe corridor for its operation.

Additionally, the Cowry technology platform will be used to pay for services on the buses.