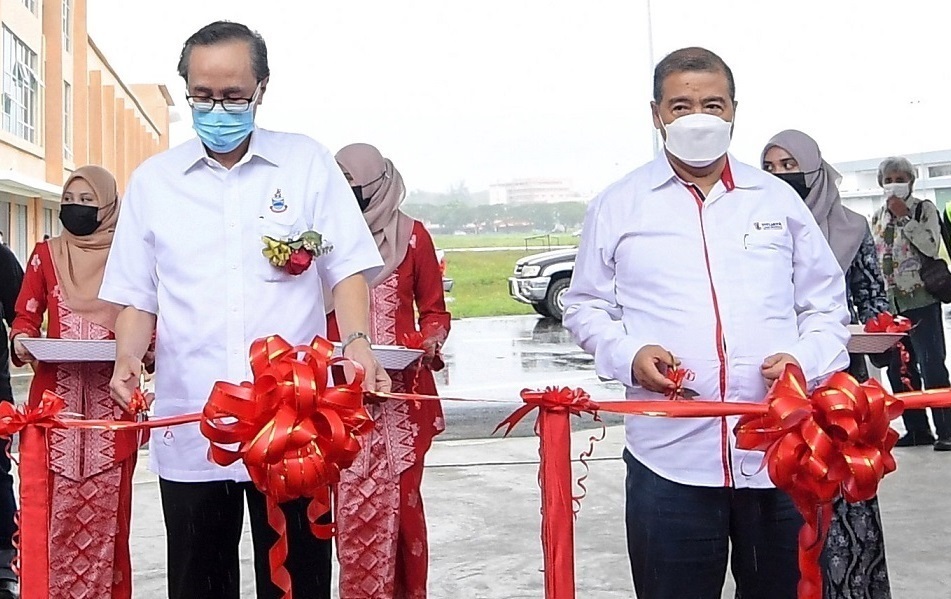 Masidi (left) cutting the ribbon to mark the opening of Lahad Datu bus station on Saturday. – Photo by Bernama

LAHAD DATU (December 11): The district now has an orderly and convenient public transportation system to meet the needs of the local community and tourists with the opening of the First Palm City Center bus and taxi terminal (FPCC ), also known as Lahad. Datu Sentral.

The terminal was a joint venture between Titijaya Land Berhad, the developer of FPCC and Sabah Housing and Town Development Authority (LPPB). FPCC is a mixed development project comprising of commercial stores, retail elements and the famous Econsave supermarket on 58.8 acres of land in the downtown area.

Congratulating the opening of this terminal, the Prime Minister, in his speech read by Masidi, hoped that it would be fully used by public transport operators in the district.
Hajiji also hopes that it will bring convenience to all users of bus and taxi services, including visitors to the neighborhood.

He said that this new facility which improves the public transport service system and ensures the well-being of the local community in particular is also in line with one of the main axes of the roadmap of Sabah Maju Jaya (SMJ) of Gabungan Rakyat Sabah (GRS). State government, namely the infrastructure network and green sustainability.

In this case, he said that Lahad Datu district now has the best network of infrastructure and that is for the welfare of the people of Lahad Datu themselves.

As we know, Lahad Datu is also one of the neighborhoods which has many places of tourist attraction such as Tabin Forest Reserve, Danum Valley and Madai Cave as well as beautiful beaches and waterfalls, so Of course, this bus and taxi terminal will provide convenience for the tourists who go to these places.

â€œThis will help the state government’s efforts to revitalize the tourism sector in the state, which has also been affected by the Covid-19 pandemic,â€ the chief minister said.

Meanwhile, Lahad Datu District Manager Dr Mohd Ayub Yaacob thanked the developer of the First Palm City Center for building the long-awaited terminal by the people, including the district’s bus and taxi operators. .

Believing that this is a facility that benefits the local community, he said before that that bus and taxi operators only park their vehicles on the side of the road.

“This terminal can make Lahad Datu one of the main stops on the east coast of Sabah,” he said, adding that the terminal was built on land owned by the Sabah Housing and Town Development Authority (LPPB ).

The general manager of the Titijaya Land Berhad group, Lim Poh Yit, said that the bus and taxi terminals, which are an integral part of the FPCC, are intended for public transport services in the district and over long distances.

“I have no doubts that this bus and taxi terminal will be appreciated and fully utilized by the residents here, as it reduces the travel time within the city and to other destinations in Sabah,” he said. .

He added that the terminal will certainly provide comfort to residents, improve the land communication system and boost tourism in the district.

With the opening of the terminal, the FPCC takes one step closer to its goal of becoming a one-stop-shop, notably thanks to its location close to the Palm Oil Industrial Cluster (POIC) Lahad Datu and the airport.

Lim also informed that besides the terminal, Titijaya Land Berhad is also focusing on its commercial building which has just been completed around the terminal area.

He welcomed the FPCC to business owners who wish to expand their business activities as well as those involved in business start-ups.

Apart from that, he also praised the announcement made to the Sabah State Assembly (DUN) on Wednesday on nine investment proposals from inside and outside the country worth $ 882. million ringgit received by POIC Lahad Datu, saying this is also good news for the FPCC.