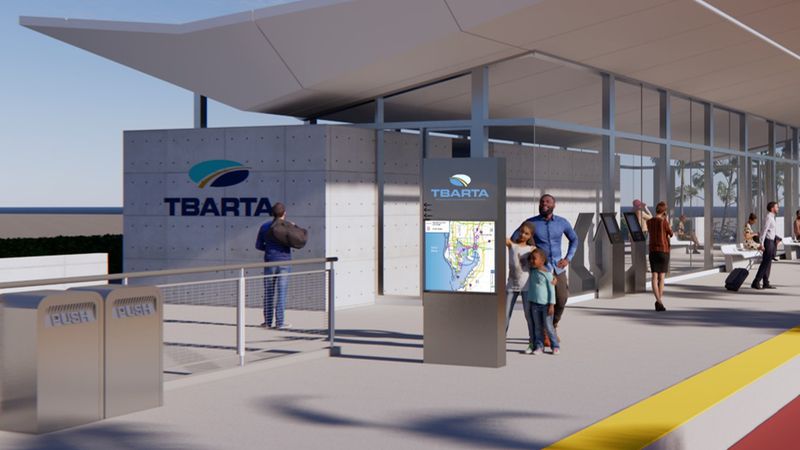 Is there an upcoming restart for the Hillsborough-Pasco rapid transit route?

A long-discussed transit line from Wesley Chapel to downtown Tampa could take a different route.

David Gwynn, the state’s regional transportation secretary, recently recognized one potential workaround – running buses from Tampa to Pasco County via express lanes on the Veterans Highway. He called it to the members of the board of directors of the authority a “fallback position”.

The idea got the green light from some Hillsborough commissioners.

“I think it’s a brilliant idea,” said Hillsborough Commission Chairman Kimberly Overman, who joined the transport company’s board in October.

Would that still be good for Pasco County?

Since its inception in 2007, the regional transit agency has studied how to serve commuters looking to travel between Pasco County and Tampa. In its first incarnation, the Tampa Bay Regional Transportation Authority, which has seven counties, suggested connecting the Wiregrass Ranch area north of State Road 56 to the University of South Florida campus on Fowler Avenue via a light rail or a fast bus along Bruce B. Downs Boulevard.

At the time, traffic on Bruce B. Downs Boulevard was already overcapacity, and Wesley Chapel was on the verge of an economic boom with a state university campus, shopping mall, and hospital among the projects underway.

But public transport ran into several stop signs. Hillsborough voters turned down a sales tax for transportation in November 2010. Pinellas County voters did the same in 2014 and, in between, Gov. Rick Scott deflated public momentum for rail service when ‘he rejected $ 2.4 billion in federal aid to build a high-speed train. line serving Tampa.

In 2017, the state legislature renamed the agency as the Tampa Bay Regional Transit Authority – commonly known by the acronym TBARTA – reduced its membership to five counties plus Tampa and St. Petersburg, and instructed her to design a regional transit option. One of the main goals now is to develop a 41 mile bus rapid transit system between Wesley Chapel and downtown Tampa and St. Petersburg.

In August, the agency’s board chose what it called its preferred alternative: to build nine passenger stations and operate buses along a mix of dedicated highways, expressways, and shared lanes on I-275. To secure Pasco’s buy-in, the board agreed to add tens of millions of dollars of dedicated freeway lanes north of Bearss Avenue to Wesley Chapel so buses weren’t stuck sharing general purpose lanes with other motorists.

We’ll provide you with the latest news and information you need to know every weekday morning.

You are all registered!

Want more of our free weekly newsletters delivered to your inbox? Let’s get started.

Explore all your options

The proposal was not accepted by Hillsborough, however. Kemp called the overall plan an unnecessary duplication of what local bus agencies could do if they had more funding. And, in June, Kemp and a majority of the Hillsborough Transportation Planning Organization, wary of the expansion of I-275 into urban areas of Tampa, reworked its long-haul document and ditched it. plans for new lanes on the freeway north of Hillsborough Avenue.

This means that the state Department of Transportation cannot legally widen the highway to accommodate motor traffic, which increases the cost of adding reinforced shoulders only for rapid transit vehicles.

â€œIt hurts and it increases the cost per passenger. And that creates a project that is much more difficult to fund, â€Gwynn said.

The implications go beyond dollars and cents to whether the project even continues to make sense.

â€œIt could be the decision to force the bus to run in mixed traffic, which means you don’t really have an efficient project anymore. You kind of shot yourself in the foot.

And, without the 10 miles of dedicated lanes to serve commuters to and from Wesley Chapel, Pasco’s future involvement is uncertain.

â€œIt gets us out for sure,â€ Starkey said.

The future of service from St. Petersburg to Tampa is clearer, with the possibility of buses running on the widened express lanes of the Howard Frankland Bridge within four years, Gwynn said.

At this time, the transit company is pursuing the required environmental study of I-275 before submitting its grant application to the Federal Transit Administration.

â€œThe road (from Wesley Chapel to St. Petersburg) that we are studying is what it is. We’re not going to change that at all, â€said David Green, executive director of the authority. “There is no plan B for the regional (rapid bus transport) at this stage.”

But, he acknowledged, continued resistance in Hillsborough County could mean the project does not advance beyond the study stage.

â€œIt’s up to the counties. The project is for counties and residents. If they don’t want it, there’s nothing to put in place, â€Green said.

And if that happens, Green said, maybe the authority will then have to consider a plan B, “but we’re not there yet.”

Routing service along the Veterans Highway takes it west of bustling Wesley Chapel, but directs it to the fast-growing areas of Odessa and Land O ‘Lakes on State Road 54 and towards the nearly 800-acre campus that H. Lee Moffitt Cancer Center & Research Institute plans for the Pasco center.

It also aims to get closer to Hernando’s base population if the service expands north in the future.

â€œThe majority of Spring Hill, which is the majority of our population, is probably going to want something along with Veterans (rather than I-275),â€ Commissioner Hernando Jeff Holcomb said.

An estimated 1.5 million people in the region cross county lines for work, the transport authority said, citing pre-pandemic data. The proposed bus rapid transit service along I-275 was projected to be 690,000 annual passengers and operating costs of $ 7.8 million.

Kemp said the state of Florida should manage operating expenses. The initial feasibility study indicated that the costs could be shared between the counties of Pasco, Hillsborough and Pinellas.

“That’s the million dollar question, how are we going to finance the operation,” said Pessaro, the transit company planner. â€œI can’t give you an answer for that. We still have to figure this out. “

Truck collides with cars and buses at Dublin Airport