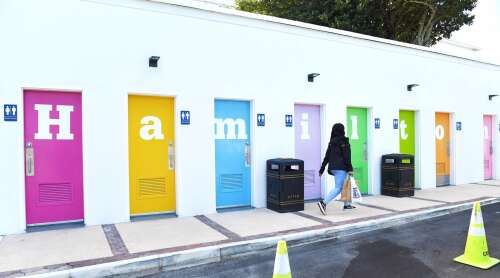 A row of eight new public bathrooms on Victoria Street in Hamilton are touted as safer, cleaner and harder to vandalize (Photograph by Akil Simmons)

The new public bathrooms will be safer, easier to clean and better protected against vandals, the Corporation of Hamilton said yesterday.

Charles Gosling, Mayor of Hamilton, said: “What makes this design unique is the fact that we have removed the shared bathroom space.

“The public will have access to individual private bathrooms with their own sinks and hand dryers.”

Mr Gosling spoke as he unveiled the eight individual toilets on Victoria Street near the bus station.

The old-fashioned public toilets were closed last March for renovations.

The work was carried out by Gorham’s Management Design.

Mr Gosling said the stainless steel-equipped bathrooms would be a model for other public restrooms in the city.

He added: ‘We haven’t gone into specifics in terms of location, but the bathrooms across from Bermuda Industrial Union are in desperate need of an upgrade.

“We need to see if this single-use bathroom concept is welcomed.”

Mr Gosling said he was “very disappointed” that one of the units had already been targeted for an attempted break-in.

He added: “Historically this has been a target of vandalism due to them being in an area with heavy foot traffic.”

But he said security cameras outside bathrooms will make it easier for city officials to track down people who try to damage the toilets.

The alternative to payday loans has its own risks

Autonation says half of cars arriving at dealerships are already sold