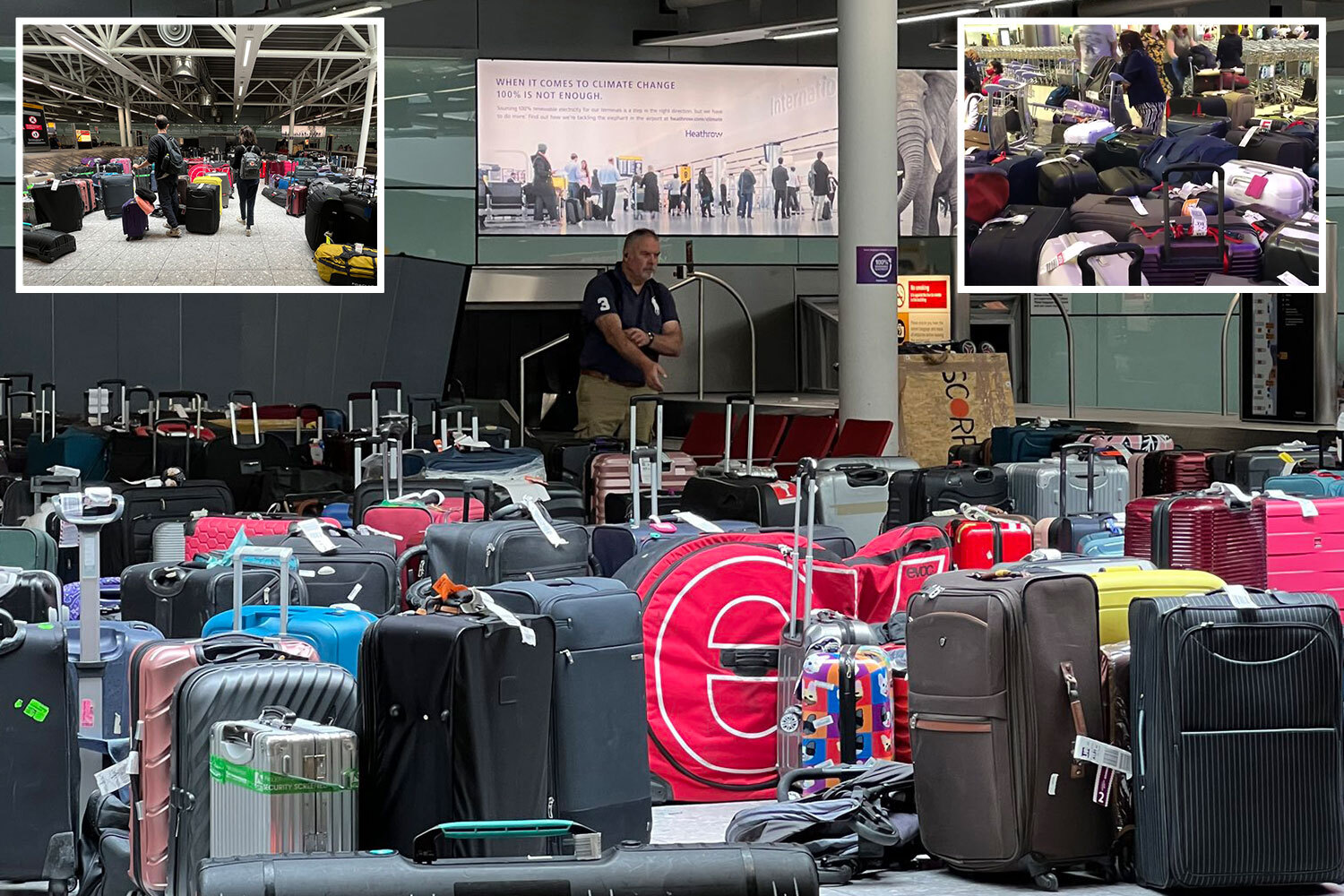 HEATHROW airport descended into chaos with suitcases left behind in the terminals as furious passengers were forced to miss connections.

The travel industry has been thrown into turmoil in recent weeks due to staff shortages, staff strikes and rising holiday demand.

Passengers have been devastated by last-minute flight cancellations, huge queues and lost luggage as airports struggle to cope.

Shocking snaps show the disarray as passengers try to navigate, with thousands of suitcases left behind on arrivals and departures.

Piles of luggage are packed in no particular order, causing travelers to fear they won’t see their belongings again for weeks.

Meanwhile, dozens of disgruntled travelers have been forced to miss connecting flights due to a bus error.

Passengers claimed to have waited over an hour for shuttles to take them from Terminal Three to Terminal Five.

The long wait meant that Britons looked forward to long-awaited trips after the pandemic was left on the ground through no fault of their own.

Hacked holidaymakers took to social media this morning to tell of the devastation caused by the lack of staff.

One person wrote: ‘Just arrived from Amsterdam and this is what @HeathrowAirport T3 baggage claim looks like…

“I tried to locate my lost bag and the staff just said ‘sorry the whole industry is a mess’.”

Another posted a picture of the departures and said: ‘Just pray your bags aren’t among these and they actually get on the flight #Heathrow Airport.

“When these bags are then returned to the UK, they will join a collection of unclaimed bags in Terminal 3

“Staff cannot say for sure when people’s items will be returned to them, but it could take weeks.”

“Over an hour (and counting) of waiting for a bus transfer from the terminal and the only comfort is the fact that British Airways flights are apparently always delayed.

While a fourth joked: “Arrived 12:28 from Australia to @HeathrowAirport…

“Every time. When did the UK have this shit on simple stuff?”

At airports across the country, travelers are already feeling the pressure of a widespread staffing crisis.

Britons going on holiday yesterday faced queues more than ‘three times the length of the airport’ in Birmingham, Bristol and Manchester.

And now airports are sinking into further chaos due to strikes.

Last night it was revealed that thousands more British Airways staff could go on strike.

Some 16,000 BA workers are threatening to join 700 check-in staff at Heathrow Airport in a planned walkout.

The workers, all based at Heathrow and members of the GMB and Unite unions, could lower their tools as early as July 8.

Meanwhile, staff at low-cost airline Ryanair in Spain, Italy, France, Portugal and Belgium will retire in a row over wages and working conditions.

The Belgian strike was the most recently announced and will run from Friday to Sunday.

The cancellations – which will likely include flights to holiday destinations like Greece and Spain – will take place in July, August and September.

It has already cut 7% of the 16,000 trips it is expected to make between July and September.

Earlier this week, more than 15,000 passengers were left behind after Heathrow Airport canceled 10% of its air travel.

Photos taken at airports across the country showed vacation hopefuls strewn across floors with bags stacked in the travel carnage.