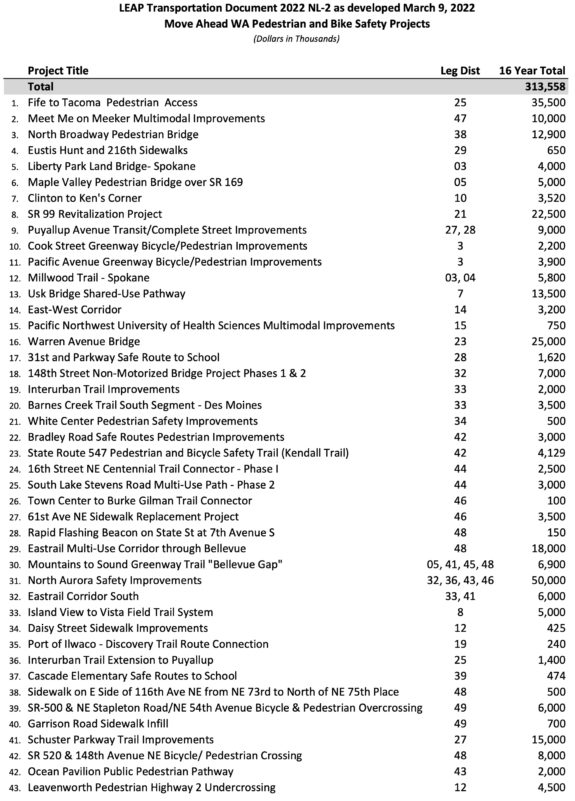 Nearly all funding for walk, bike and transit projects in state from Democrats Move Ahead Washington Funding Plan moved to the latest version of the bill. Both the House and Senate voted Thursday to approve the updated package shortly before the end of the state’s 2022 legislative session.

The package was significantly reworked in the final weeks of the short session after Democrats decided to drop a tax on fuel exports amid outcry from neighboring states that rely on oil from Washington refineries. However, as this revenue stream was primarily for highway spending, investments in walking, cycling and public transit were largely spared the cuts. The reworked pack now understands finance more of the State’s operating and public works budgets.

Democrats control the House, Senate and governor’s office, and this package would be the party’s first major transportation funding move since it took control of all three. Republicans widely opposed the bill. Versions of the package had already passed the Senate and House, but the reworked version needed another round of votes before it could make its way to Governor Inslee’s office.

Comparing the March 9 list of â€œpedestrian and bicycle safetyâ€ projects to the previously approved February 14 list, no projects were deleted. Two projects received budget increases (the Usk Bridge shared-use road over the Pend Oreille River and the Bradley Road Safe Routes project in Lyden), but the $10 million â€œcontingencyâ€ budget was scrapped. Thus, the total allocated to the list decreased by $3.5 million, but the total specifically intended for projects increased by $6.5 million. Compared to the initial proposal at the beginning of the session, the list increased by $20 million.

The WA State House and Senate released their compromise and the final version of #MoveAheadWA and conference committees recommended passage.
We’re excited to share that the final release includes an additional $20 million in the Bike/Ped project roster!

The list of pedestrian and cyclist safety projects as of March 9 (PDF).

When you add this list of $313 million projects to the $290 million for Safe Routes to School, $216 million for a school-based bicycle program, $278 million for the bicycle/pedagogy grant program, 146 million for complete streets and $50 million for â€œconnecting communitiesâ€ grants, the total for the active transportation budget group is $1.29 billion.

Compared to previous state transportation packages, this one is a huge shift in the right direction. Lee Lambert, executive director of Washington Bikes, called it â€œhistoric and unprecedentedâ€ in a press release. The level of investment in walking, cycling and public transit is significantly higher than previous state funding efforts.

But despite all this change and excitement, there are still plenty of new and widened highways included in the package. These projects are even worse when you consider that they are not paid for by driving-related taxes and fees like gasoline taxes or the abandoned fuel export tax. A joint letter from Front and Centered, 350 Washington and Disability Rights Washington expresses this concern:

â€œNot only is road expansion harmful, but it is doubly harmful when funded by revenue that could be used to meet our other pressing needs, such as affordable housing, health care, education. , rural broadband, drinking water and disaster response. We strongly disagree with the Legislature’s use of billions of dollars from the General Fund and Public Works to expand highways.

In the end, using general fund money was easier than cutting highway projects or taxing oil, and that says a lot about the current state of the Democratic Party in Washington. It was a huge lift to get this thing through without Republican support, but the party still has a lot of work to do on its own. We can applaud the package’s successes and congratulate those who worked tirelessly to make it happen while taking notes for the future.

No benefits for airport worker injured walking through terminal