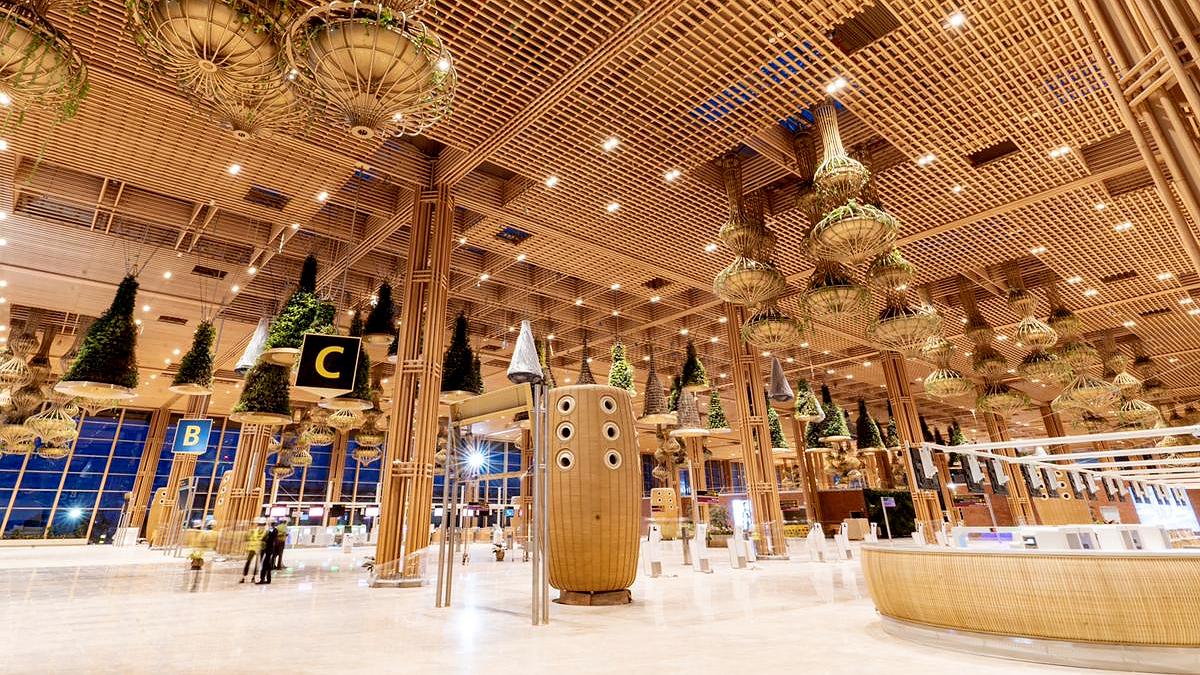 Terminal 2, which opened 14 years after the airport began operations in 2008, is expected to meet growing air traffic volume over the next decade

An interior view of the new Terminal 2 at Kempegowda International Airport; (Photo: NNA)

By Ajay Sukumaran: Visuals of the new terminal at Bangalore’s Kempe Gowda International Airport have been trending on social media for several weeks ahead of its inauguration by Prime Minister Narendra Modi on November 11. Terminal 2, which opens 14 years after the greenfield Bangalore Airport began operations in 2008, is expected to meet growing air traffic volume over the next decade.

The big draw was the interiors of the terminal, with its bamboo trellis finish and hanging gardens. Over the weekend, Bangalore International Airport Limited (BIAL), the company that manages the airport, unveiled the new features of its “Terminal in a Garden” theme. Here are five of them:

Yes, you read that right. Two types of decorative planters hang from the ceiling, some shaped like bells and others designed as a chain of onion baskets above each other, called sails. In total, there are 500 such systems, each containing hundreds of plants. Thus, suspended from the ceiling alone, 150,000 living plants of various species.

Apart from that, around 450,000 live plants grow in the green walls that line the hallway between the check-in counters and the security gates. Altogether, there are a total of 600,000 living plants in the terminal building.

Originally, Kempe Gowda International Airport had a lush landscaped garden lining the road leading to its entrance. But these had to be moved in order to widen the access road. “The first promise we made was to save everything we had on campus. Thus, 7,900 plants were transplanted,” explains Prasannamurti Desai, vice president and landscaping manager at the airport.

As part of this effort, the tall trees were placed in ventilated containers, which would give them ample moisture and also prevent root tangling. The plants have thus been preserved on 26 acres of land over the past four years, he says. Last year, during the Covid pandemic, the relocation of these factories to the new terminal and its surroundings began. This process is still ongoing. “By March, when we open the international side [of the airport]you will be walking through the canopy of the trees,” says Desai.

The foliage inventory at the terminal reads as follows: 620 endemic plants, 150 species of palm trees, 96 species of lotuses and 100 varieties of lilies.

Indoor plants at Terminal 2 are all grown in an inert soilless medium made from a mixture of various ingredients, such as coco peat, perlite and vermiculite. Bells and sails have independent water reservoirs and humidity levels are monitored by three types of sensors. “Water is only supplied when the plants ask for it. It’s a completely intelligent system,” says Desai.

Typically, tank levels should be topped up once every 20 days. The smallest of the hanging bells holds 470-810 plants, with each plant consuming 10ml per day.

Terminal 2’s other big draw is its bamboo pattern – the airport terminal’s pillars and roof are all covered in engineered bamboo, which is fire-retardant and durable, according to the airport’s brochure. The sheathing is equivalent to 923 km, it is specified.

The terminal’s skylights cover an area of ​​19,494 square meters, or almost 12% of the total roof area. Coupled with solar panels, this contributes to 24.9% energy savings, according to the brochure. Six basins supplied with rainwater meet the airport’s non-drinking water needs.

The newly inaugurated building is the phase 1 project of the new terminal. With a built-up area of ​​255,661 square meters, it can accommodate 25 million passengers per year. The terminal will have 95 check-in counters, 17 security screening lanes, 22 contact gates, 15 bus gates and nine baggage claim devices.

The second phase will create capacity to accommodate an additional 20 million passengers. “Over the past 14 years, Bengaluru Airport has evolved as the gateway to South India, and with this next phase of expansion, it aims to position the airport as the new gateway to India. ‘entrance to India,’ said Hari Marar, MD and CEO of BIAL. , in a press release.

Currently, connectivity to Kempe Gowda International Airport in Devanahalli, 36 km north of Bangalore, is by road. A metro line to the airport is under construction while the city’s proposed commuter train will also eventually connect to the airport.

According to BIAL, the new terminal was designed as a multimodal transport hub to integrate these projects once completed. It will have a commuter rail station and a metro station for the airport, as well as facilities for transport buses, rest areas for taxis and parking for 1,200 cars.