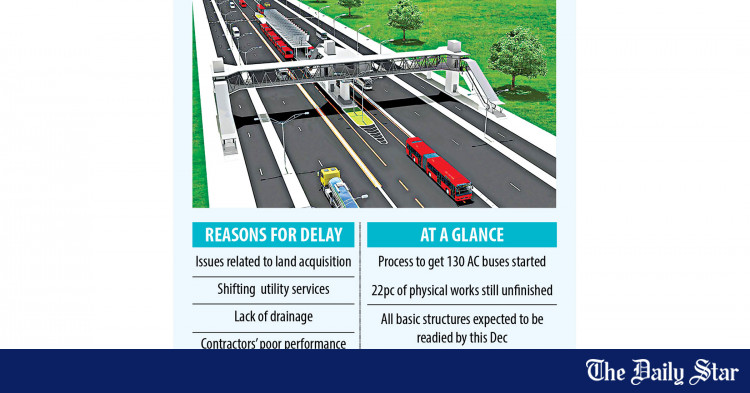 Operation of the country’s first dedicated rapid bus service – from Dhaka Airport to Gazipur – is due to start in July next year, more than six and a half years after its original deadline.

The development came at a time when the extended deadline for the long-delayed project ended last month, with around 22% of the physical works still unfinished.

All the basic structures should be ready by December this year, while it would take another six months to complete all other processes, including the purchase of buses and the hiring of operators, Shafiqul Islam said. , Managing Director of Dhaka BRT Company.

“We will start operating the BRT in July next year,” he told the Daily Star yesterday.

However, at a press conference in September last year, Shafiqul said the operation would start from December this year.

Asked about the delay, he said that although basic infrastructure would be completed by December, some other works would remain unfinished.

The project – officially known as the Greater Dhaka Sustainable Urban Transport Project – has recorded progress of 77.77% through June.

But it has been delayed for a variety of reasons, including problems with land acquisition and relocation of utilities, lack of sufficient drainage, insufficient flow of money from contractors, and the pandemic.

The project has undergone four revisions, with its total cost now estimated at Tk 4,268.3 crore. The last deadline was June 2022.

In the meantime, passengers using the adjacent roads suffer greatly, especially during the rainy season, due to construction works, which have damaged the existing track, causing severe traffic jams.

The project authorities have already requested time until December 2023, including a one-year default liability period and an additional Tk 268.13 crore.

The Department of Roads and Highways, the Bangladesh Bridge Authority and the Local Government Engineering Department are implementing different parts of the project works, while Dhaka BRT is supervising the operations.

The 20.5 kilometer bus corridor will allow people to reach Dhaka from Gazipur, the neighboring city where the cost of living is much lower, in 35 to 40 minutes. This journey now takes between 1h30 and 4h. From the airport, you can take the metro – currently under construction – to reach other parts of Dhaka.

According to the plan, dedicated buses would operate on two central lanes of the highway, while four lanes would facilitate mixed traffic, two additional lanes for slow-moving vehicles, with sidewalks on both sides.

The service would start with 100 new buses, capable of transporting 20,000 passengers per hour from the Shibbari area of ​​Gazipur to Dhaka airport. There would be 25 stations on the corridor.

On July 4, the Dhaka BRT company posted advertisements seeking an invitation to show preliminary interest in purchasing buses and operators.

According to the advertisements, the authorities would buy electric-powered (battery-powered) air-conditioned buses.

The operator will ensure the operation and maintenance of the buses for a contractual period of 10 years, which can be extended by one year.

Interested companies were invited to submit their documents before August 7 this year.

Shafiqul said they would see presentations from interested companies and then move on to final bidding.