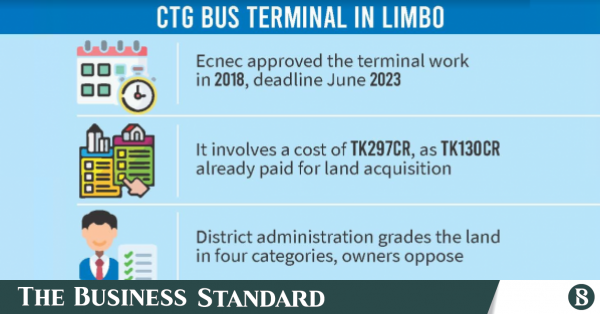 The Chattogram City Corporation has not yet started the construction of a modern intra-district bus station in Kulgaon Baluchara due to a delay in land acquisition. The deadline will expire in June next year.

The Tk297 crore terminal works was approved in 2018 by the National Economic Council (Ecnec) for buses operating on 32 routes in northern areas of Chattogram, such as Hathazari, Nazirhat, Fatikchhari, Raozan and Rangunia.

The city authorities then paid Tk 130 crore to the Chattogram district administration for the acquisition of about 8 acres of land.

But since the district administration failed to hand over the land even in four years, the municipality said it could not start construction of the terminal.

According to the Chattogram Intra-District Bus Owners Association, approximately 400 to 500 buses make trips on the 32 routes daily, regularly carrying more than one million commuters.

“We park the buses on the roads now because there is no permanent terminal,” Mohammad Shahjahan, the association’s organizing secretary, told The Business Standard.

He agreed that vehicles parked on main roads are one of the main causes of traffic jams in the city, but he blamed the authorities for the problem.

“It is always said that there is no service for passengers on intra-district buses. In fact, there is no infrastructure for us to provide passengers with the services they deserve. As there there is no permanent terminal, bus drivers do not rest enough between trips, which contributes to the risk of accidents.

After Bahaddarhat bus station in 1993, no new bus station has been built in Chattogram in the last 30 years. Meanwhile, rapid urbanization has led to a massive increase in city traffic.

In 2015, Chattogram Mayor AJM Nashir Uddin took the initiative to build a modern bus-truck terminal in the city’s Kulgaon Baluchara district. The terminal works were approved by Ecnec in 2018 as part of a project entitled “Development of the road network and construction of a bus-truck terminal”.

Usually, the compensation for agricultural land is three times higher than for the lowland category.

“The mayor recently inspected the designated site. In light of the owners’ request, he wrote to the district administration to consider the low-lying plots as agricultural land,” said Abu Saleh, project manager and engineer of the municipal corporation. The commercial standard.

“We have informed the higher authorities. The case will be finalized soon,” he told The Business Standard.

Preview of the Disney + series “Cars on the Road”: Mater goes fast!

Check out our exclusive interview with the show’s directors and producer!