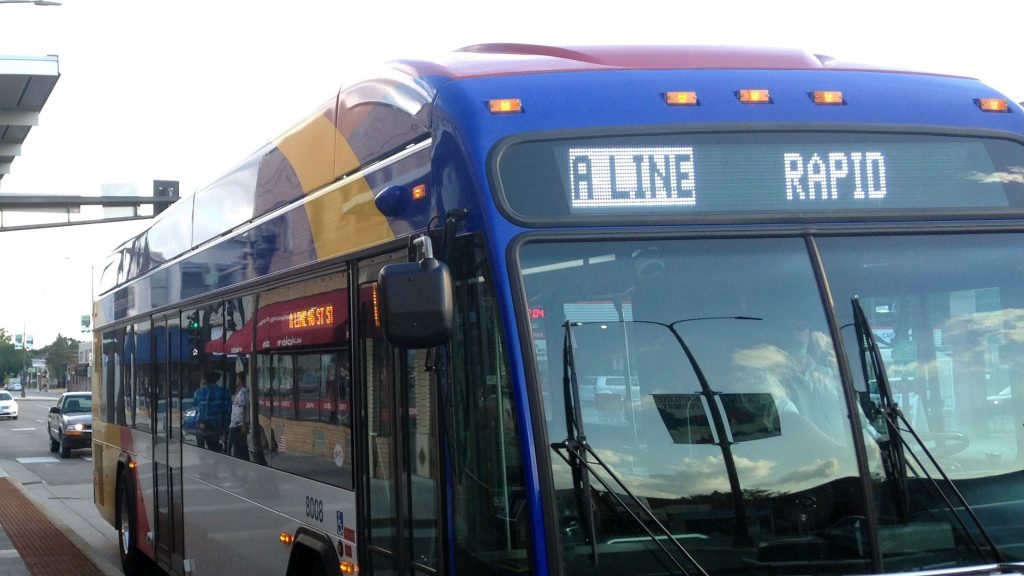 Rush Line buses are not running yet, but the protests are.

â€œWhen I watch that it makes my head explode,â€ said group member Jiggs Lee. They say the 89 daily bus trips are too many for White Bear Lake, that ridership will be low, and it will destroy eight miles of the Bruce Vento multi-use trail.

The group is fighting the Rush Line with petitions, lawn signs and website norushline.com. It also hosts a booth in the weekly Marketfest at White Bear Lake.

Andy Gitzlaff, senior transportation planner for Ramsey County, said the group’s concerns have already been addressed and construction on the 15-mile project will begin in 2024.

The Rush Line is one of many rapid transit bus lines proposed or constructed in the metropolitan area, including the Gold Line between Woodbury and St. Paul.

Opponents say Rush Line won’t rush at all. It will take a cyclist 47 minutes to travel from St. Paul to White Bear Lake, about twice the driving time.

And, he said the ridership will be low. â€œYou’re going to have a lot of empty buses,â€ he said.

David cited a Rush Line poll showing that 20 percent of area residents would use the bus “a few times a month” or more. About 9% would take it daily.

The Rush Line will operate every 10 minutes during peak hours, and every 15 minutes at other times. The buses would run on roads and bridges built exclusively for them, including overpasses on Minnesota Highway 36 and Interstate 694.

Gitzlaff, of Ramsey County, said 21 stops on the line were chosen to help workers access the 100,000 jobs within a half-mile radius of the route. About 7,400 trips per day are planned by 2040.

But these estimates were made before the pandemic.

COVID has led to a decline in transit users in the metropolitan area, where ridership halved in 2020. Group member Lee said some declines will be permanent as workers who have learned to work from home will not want to return to their place of work.

“A LOT OF THIS WORK CANNOT BE DONE REMOTELY”

But Ramsey County’s Gitzlaff said officials expect ridership to rebound – especially along the Rush Line route. â€œWe have over 50 hospitals and clinics,â€ he said. â€œA lot of this work cannot be done remotely. “

Bus advocates say the Rush Line is designed for people without access to cars. But there are very few of them, Lee said, and they are now served by three bus programs – Metro Mobility, the nonprofit Newtrax and Transit Link.

The two-lane bus route would be built along eight miles of the Bruce Vento Multi-Use Trail. Gitzlaff, of Ramsey County, said buses and bikes would coexist peacefully, along parallel paths.

For more information on the Rush Line, visit https://www.ramseycounty.us/.