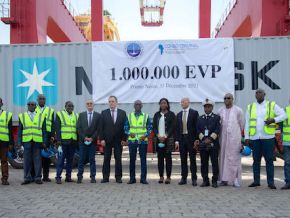 (BOLLORE) – Congo Terminal, a subsidiary of BollorÃ© Ports, exceeded the volume of one million sea containers handled in 2021, having managed 1,003,734 TEUs during the year. This new level of performance reflects the efforts made by BollorÃ© Ports to increase traffic from 200,000 to 1,000,000 TEUs, in accordance with the commitments made as part of the modernization plan for the port of Pointe-Noire.

BollorÃ© Ports has invested more than 400 million euros since 2009 to modernize the infrastructure and equipment of the container terminal. These investments made it possible to extend quays L and D by 1,500 linear meters and increase their depth to fifteen meters. They also reinforced the port’s equipment, with the acquisition of 6 new STS cranes and 18 RTG cranes.

During the last decade, the terminal operator has also carried out construction works, having built storage areas covering more than 32 usable hectares, a multimodal logistics zone of 4.5 hectares connected to the Congo-Ocean Railway , and a technical workshop dedicated to maintenance. operations. It also uses the Navis N4 operating system to manage and automate operations in the terminal.

Congo Terminal is an employer that supports local recruitment. It currently employs more than 900 Congolese talents and calls on more than 1,500 temporary workers. The company is also developing the skills of its employees and is committed to promoting gender equality, particularly in technical professions such as STS crane operators.

SÃ©raphin Bhalat, director of the Port Autonome de Pointe-Noire, said: â€œThis result attests to the success of the partnership between Congo Terminal and the Port Autonome de Pointe-Noire. Now that we have crossed this symbolic level, our objective is to become a transshipment hub helping the national economy and the sub-region to develop and a user-friendly smart eco-friendly. ”

â€œBeyond operations, we have decided to extend our commitments to involve all stakeholders in an ambitious CSR policy. This is evidenced by the Green Terminal label created by BollorÃ© Ports and certified by Bureau Veritas, which aims to support the development of an eco-responsible port. infrastructure, ” explains Anthony Samzun, general manager of Congo Terminal.

Congo Terminal, BollorÃ© Ports concession, is the operator of the Pointe-Noire container terminal. The company is engaged in a public-private partnership which enables it to meet the requirements of its clientele of shipowners, importers and exporters. By considerably reducing its prices in recent years, Congo Terminal is helping to improve purchasing power and fight against high cost of living. With ISO 9001: 2015, ISPS (security) and Pedestrian Free Yard (HSE) certifications, the company benefits from cutting-edge technologies and equipment and from the great port expertise of the BollorÃ© Ports network. Congo Terminal implements mobility solutions that respect the environment, in particular electric buses for the transport of employees in the facilities. Congo Terminal employs more than 900 Congolese employees and carries out solidarity actions in favor of young people, environmental protection and education. www.congo-terminal.net