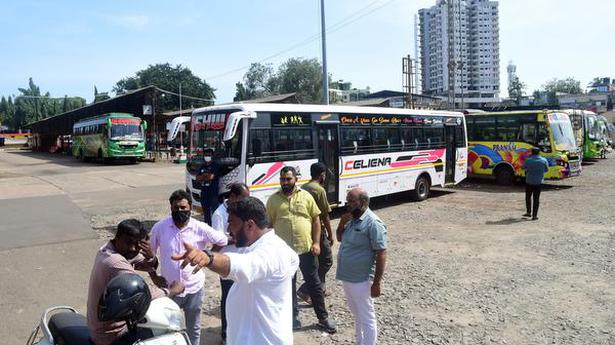 Mangaluru City Traffic Police, in consultation with the District Administration and the Mangaluru City Corporation, decided to move the city’s private bus stop to the State Bank Bus Terminal when operators will resume their services on July 1.

Deputy Commissioner of Police (Traffic) MA Nataraj said The Hindu that the district administration has given its approval in principle for the change on a trial basis. The move aims to facilitate one-way traffic from Maidan Road surrounding the central business district from the clock tower to the clockwise clock tower and ensure uninterrupted movement of vehicles.

Mr Nataraj said that no more than 10 to 15 city buses will be parked at the existing facilities for dropping off and picking up passengers at a time, as the buses depart one after the other within about five minutes. The same number of buses can be accommodated inside the terminal of the State Bank at the identified space. Buses will enter the terminal from Rao & Rao Circle and exit from the usual exit point.

Police also asked service operators and long-distance express bus operators not to park their buses beyond 30 minutes at the terminal. Some long-distance buses with a buffer time between arrival and departure are parked inside the terminal for long hours, while some even undertake minor maintenance / repairs. This will be avoided in the coming days, Nataraj said.

Mr Nataraj said the move would help people switch between city buses and service buses and avoid traveling a distance for that purpose.

While some city bus operators feared the development, Dakshina Kannada Bus Owners Association chairman Dilraj Alva said the association was supporting these trial operations with the hope of a positive outcome.

Mayor Premanand Shetty, who inspected the scene on Wednesday, promised to provide equipment, including concrete / asphalt floors and streetlights, once the system stabilizes. At the moment, crushed stone powder has been spread on the road surface after leveling the land, he said.