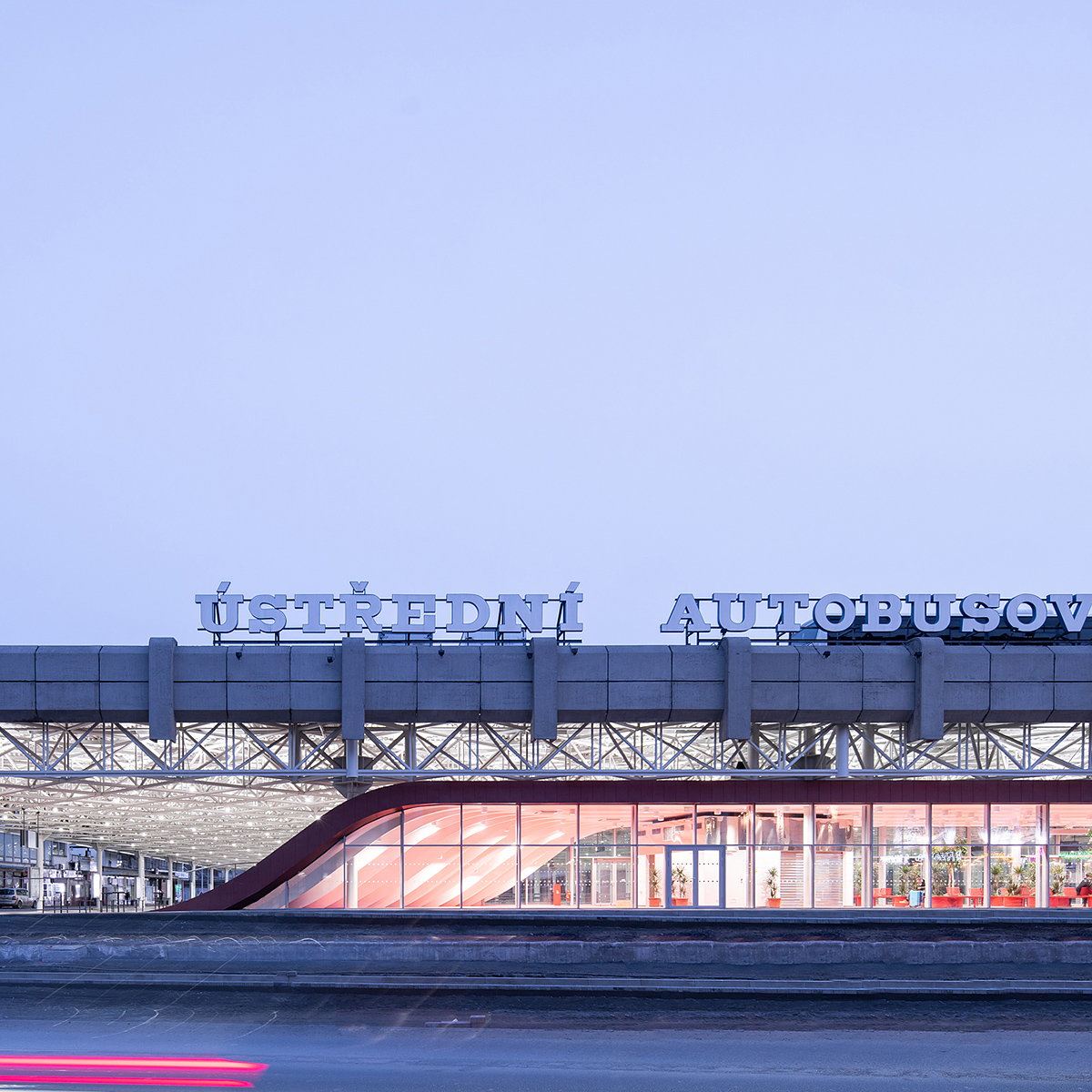 CHYBIK + KRISTOF Architects has completed the restoration of the historic Brutalist heritage site, Zvonarka Bus Station, in Brno, CZ. The project is the result of a ten-year campaign to preserve the structure, engaging with public and private stakeholders to secure funds for the restoration and overhaul of the decaying space.

Initiated in 2011, this redesign and restoration project saw the architects actively engage in the preservation of the existing Brutalist structure – a steel frame and a concrete roof – and its original architectural identity, reflecting the commitment of CHYBIK + KRISTOF to perpetuate the architectural heritage. Emphasizing the central role of the station in the socio-cultural fabric of the city and the region, they address the urgent need to rethink the use of a transport hub and a declining public space. Placing transparency and accessibility at the heart of their design, they transformed the bus station into a functional entity adapted to current social needs.

Similar to the internationally renowned Hotel Praha and Transgas buildings in Prague, Brno’s Zvonarka Central Bus Station, built in 1988, has long been considered one of the remaining notable examples of the Brutalist architectural heritage of the Czech Republic. Dominating much of post-war architecture, brutalism or ‘raw concrete’ – in reference to exposed concrete architecture that celebrates both progressivism and experimentalism – has long polarized architects and artists alike. academics, including CHYBIK + KRISTOF. Like notable figures from Zaha Hadid to Kengo Kuma, they have always advocated for the preservation of Brutalist architectural heritage, citing its intriguing aesthetic and material qualities.

With many such structures demolished or threatened in recent years – including the now demolished Hotel Praha (2014) and Transgas (2019), the controversial Robin Hood Gardens (2017) in London and the Burroughs Wellcome Building (2021) in United States, CHYBIK + KRISTOF affirm their commitment to their protection, placing the Brutalist Zvonarka Bus Terminal building as a local example of such circumstances. â€œDemolitions are a global problem,â€ said architect co-founder Michal Kristof. â€œOur role as architects is to engage in these conversations and demonstrate that we are no longer operating from a blank slate. We need to consider and also work from the existing architecture – and gradually shift the conversation. from creation to transformation. “

Designed in 1984 and built in 1988, Zvonarka Central Bus Station has always been the region’s main bus station for intercity transport. In 1989, the building was privatized, only the first phases of construction were completed and resumed its role as a bus station. Recognized as a brutalist heritage site, its high maintenance costs have led to little maintenance, leading to its gradual deterioration.

In 2011, CHYBIK + KRISTOF became aware of the degradation conditions of the station. Eager to provide a positive alternative to a seemingly unrecoverable space, they reached out to its private owners with a basic overhaul proposal. Gaining the attention of the general public through social media, their initiative sparked a conversation between local private actors and public authorities – and after a four-year collaborative exchange, the required funding was reached in 2015, notably through recognition of the project as a European fund project. In 2021, ten years later, the architects are now unveiling the restored and redesigned transport hub and public space – a preserved brutalist heritage site and a reconfigured functional space, attentive both to its history and to the evolution of social needs.

Transparency is the basis of their new design. Paying homage to its original architect RadÃºz Russ, they proudly display the characteristic Brutalist elements of the station – a steel support frame and concrete roof – contrasting their angularity with an organic wave that reflects the continuous flow of vehicles and vehicles. passengers. They also turn to structural transparency, removing walls and favoring light as evocative of access, safety and comfort. Following the original square plan, they reconfigure the main hall as an open structure without walls. With a two-sided roof, the interior space houses the individual bus stops while the exterior area serves as a parking space for buses. Eager to open the terminal to the city, the architects remove the temporary structures added in the 1990s and erect a second entrance to the station at street level. Adding new lighting fixtures to the dilapidated main structure which they repaint in white, they introduce a new information desk, ticketing and waiting areas, platforms and an orientation system accessible to people with disabilities. Thanks to this design, CHYBIK + KRISTOF transformed the building into a dynamic, functional and intrinsically social hub, channeling an unlimited flow of locals and passengers.

â€œWhile our knowledge of the city of Brno has proven to be a real asset, our commitment to this project resonates with architects around the world,â€ said Ondrej Chybik and Michal Kristof. â€œBeyond a functional concern, the role of architects is rooted in understanding, deconstructing and responding to the gaps that often form our social structures – that is, our role is inherently social, based on the people “. Ultimately, by revisiting the past, engaging in the present and projecting into the future, architects can and should be catalysts for change. “