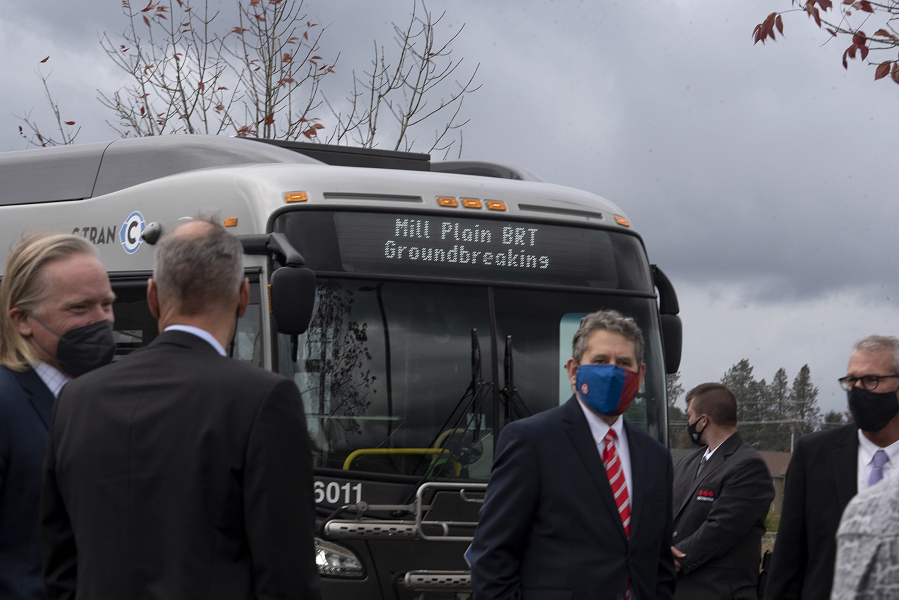 The agency held a groundbreaking ceremony on Tuesday to mark the start of construction on the 9.9-mile line, which will run along Mill Plain Boulevard from downtown Vancouver to the Columbia Tech Center in east Vancouver. .

The line is expected to enter service in 2023.

C-Tran CEO Shawn Donaghy greeted guests at the ceremony in the parking lot behind the Clark College Columbia Tech Center building, where the future Mill Plain Transit Center will be built to serve as the line’s eastern terminus.

The $ 50 million project is funded in part by a $ 24.9 million grant from the Federal Transit Administration, which the agency committed last year and officially awarded last week. The remaining cost is covered by a mix of sources, including C-Tran, the state’s regional mobility grant program, and a federal congestion alleviation and air quality grant.

FTA administrator Nuria Fernandez said the line would provide a closer link between the two largest employment areas in Clark County and provide faster access to public transportation for residents traveling to medical appointments and at leisure destinations.

Vancouver Mayor Anne McEnerny-Ogle, who chairs C-Tran’s board of directors, highlighted the performance of the agency’s frontline BRT, Vine. The line produced immediate and permanent ridership gains, she said, as well as increased development along the Fourth Plain Corridor.

Clark College President Karin Edwards said the new line, like the Vine before it, will bring substantial improvements to student transit access.

â€œI am glad that what was done on Fourth Plain is reproduced here,â€ she said.

The new line will primarily replace C-Tran Route 37, serving 37 new stations along the Mill Plain Corridor. It will use the existing Turtle Place bus station in downtown Vancouver as its western terminus, straddling the Vine.

Construction of the Mill Plain transit center will begin later this year, according to a press release from C-Tran, and work on the remaining stations is expected to begin in January. The main contractor is Tapani Inc., based in Battle Ground, who also helped build the vineyard.

The Vine debuted in 2017 and runs along the Fourth Plain Corridor between downtown Vancouver and the Vancouver Mall. It offers frequent service using 60-foot articulated buses and special platforms designed for boarding through the front and rear doors, with fares paid in advance.

Vine buses mingle with regular traffic rather than operating in reserved lanes or on a separate right of way like in a conventional BRT system, but buses have the option of jumping to the front of the queue at some traffic lights, as well as other improvements to speed up the journey.

The Mill Plain BRT line will follow the same pattern and likely use the same name – or at least, that’s where things seem to be heading. Fernandez called it the â€œsecond line of the vineâ€ during Tuesday’s ceremony, but the event’s commemorative posters and knickknacks still used the Mill Plain BRT nickname.

Last year, C-Tran’s director of external affairs Scott Patterson told the Columbian that the line would likely be named after Vine and that C-Tran was planning to introduce color designations for its BRT lanes. The agency is still working on a final naming and branding plan, officials said at Tuesday’s event.

Planning for the Mill Plain line began almost immediately after the opening of the first line, following a plan set out in a 2008 study by the Southwest Washington Regional Transportation Council, which envisioned a trio of BRT lines starting from the center. -City of Vancouver along the Fourth Plain, Mill Corridors of the Plain and Highway 99.

Several speakers at Tuesday’s event stressed the desire to maintain momentum and add the planned Highway 99 line to the network as soon as possible.

â€œMill Plain is the second branch of the vineyard, but it won’t be the last,â€ said Clark County Councilor Temple Lentz, who is vice chairman of the C-Tran board.

The Vine was the first BRT line in the Portland metro area, but the Mill Plain line will be the third; TriMet began construction last year on the division’s transit project, a BRT line that will run along the Southeast Division Street corridor between downtown Portland and Gresham and is scheduled to open. next year. McEnerny-Ogle praised the TriMet project in his remarks at Tuesday’s ceremony.

“I want this to be known, however,” she added, “we were the first.”

This story has been updated to clarify the sources of funding for the Mill Plain BRT project.