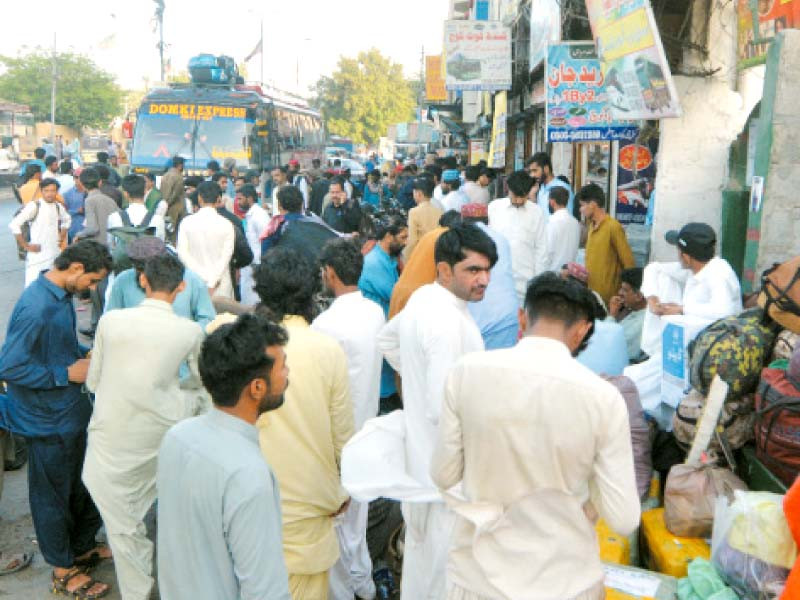 Karachi, the country’s largest urban metropolis, regularly experiences huge inter-city and inter-provincial movement of people during the festive season, on the occasion of Eidul Fitr. This had to be restricted under the protocols related to the pandemic of yesteryear.

However, now that the city is fully open and travel unrestricted, Karachi residents, many of whom have been waiting for two years to spend the holidays with their families, have resumed crowding into local bus stations and hustle for a ticket. , in the absence of adequate special trains for Eid. Seeing the increased demand for public transport and the lack of options, various bus services have reportedly increased their prices by 30-40%, offering exorbitant fares to desperate commuters.

In this regard, the Ministry of Transport has reprimanded various bus operators, reminding them not to exploit the free market. John Baloch, Per Lee Market Intercity Bus Station Secretary, said much of the rush to bus stations was due to the fact that intercity and inter-provincial transport had been severely restricted during the previous two Eids. “This is the first time that people are free to move around without any restrictions. So as people rush to meet their families, the bus services are also trying to make up for the 30-40% of the losses they have suffered under Covid-19 protocols,” he said.

Wazir Khan, who works at an inter-provincial bus stop in Sohrab Goth, while addressing the influx of passengers, said pre-bookings have been halted at his terminal due to the incredible demand for inter-city and inter-provincial transport. “Tickets are now only available on a first-come, first-served basis. The minimum fare for intercity or inter-provincial buses is Rs 200 to Rs 300, while average fares are between Rs 400 and Rs 600, and long distance journeys are charged between Rs 700 and Rs 1,000 or more, depending on the operator and quality of service,” he said.

Speaking about compliance with coronavirus-related SOPs, Shakir Ahmed, an employee of Yousuf Goth bus station informed that face mask and social distancing requirements were thrown to the wind on intercity and inter-provincial buses as soon as the government scrapped travel bans. “No one bothers to check vaccination cards anymore. The coronavirus is now a thing of the past, it seems,” the employee commented.

Addressing the surcharges imposed on outgoing buses from Karachi, he said it is because most of these buses are loaded from Karachi while the number of people returning is not enough. According to Ahmed, this makes it difficult for bus operators to justify overhead costs such as fuel consumption and air conditioning expenses. “However, the fluctuation in ticket prices is mainly due to the smaller bus operators and not the larger bus services which have fixed fares. a rush of passengers due to the sheer volume of commuters compared to the transportation options available to them,” the station worker added.

In this regard, the head of the Intercity Bus Association, Riaz Malik, said that although there is a lot of traffic on intercity and interprovincial buses, not all bus operators have levied a surcharge. “This is inaccurate information,” he said. Moreover, the adviser to the chief minister of the province said that the transport department has advised intercity and inter-provincial bus operators not to charge extra fees during Eidul Fitr. “The department is taking legal action against bus owners who flout the government’s recommendation, in coordination with the district administration, and that action will continue,” he told The Express Tribune.

Published in The Express Tribune, May 3rd2022.

A new bus terminal will open at Solar in Erode