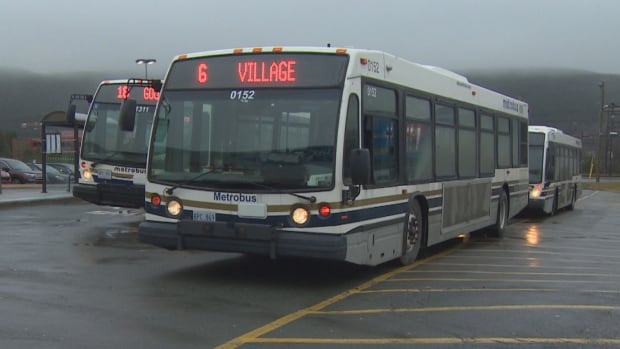 The Newfoundland and Labrador government has promised to expand a program to give bus passes to more residents of St. John’s, Mount Pearl and Paradise, but a St. John’s councilor says that there may not be enough money to sustain the program.

In 2020, the province committed $2.1 million per year to the program, which allows people on income support access to free Metrobus or Go Bus passes.

Thursday’s provincial budget pledged to expand the program to include low-income seniors and youth in care, but also cut funding to $1.9 million a year.

St. John’s councilor Ian Froude says that means the program will no longer have the funding it needs to continue.

“We need the $2.1 million or the program is very unlikely to exist in the future,” Froude said.

“That lower amount was extremely frustrating to watch.”

He said the city was in discussions with the province about the program and was adamant that it could not go below the initial amount to run the program.

“With the inclusion of the [guaranteed income supplement] beneficiaries, that means we lose $100,000 of revenue on the other side. So they created a $300,000 hole in the public transit budget. Â»

Froude said the money makes a big difference in the already strained transit budget. He said all buses run on diesel and this year’s unexpected price hike is leading to a significant increase in expenses.

“With the rising cost of diesel, it’s extremely difficult to budget for transit service in the city,” Froude said.

“We’re in the range of $1 million more on diesel costs.”

“Due to various lockdowns and the mentality of people around being on the go, ridership is also not what it usually is on public transport.”

Despite rising costs and a cut in funding, Froude said the city wants to continue the program and recognizes its importance.

â€œWe know this program matters to a lot of people. There are approximately 5,600 people in these three communities using the service, and we want that to continue,â€ he said.

Froude said he and Mayor Danny Breen were in conversation with the province about the reduced amount after the budget was released.

“We hope they think it over and come back to us with the extra $200,000. And we can confidently move forward so that those 5,000 to 10,000 people in St. John’s, Mount Pearl and Paradise can have reliable transportation to go. forward.”

They added more user groups while reducing the budget from 2.1 million to 1.9 million. Of course I want young people in care and old people with low incomes to use the bus for free, I agree with these additions. It’s just that they knew the cost of adding them and decided NOT to pay for it. 3/

On Twitter, General Counsel Maggie Burton expressed many of the same sentiments.

She said she is disappointed with the provincial government and feels it has no respect for city services.

“They announced it without an agreement with the transit authority and the city,” Burton said, referring to the additional groups being added to the schedule.

She called on the government to “get it right” and restore funding to its original amount.

We are facing rising costs for the cost of diesel, and soon enough for fleet electrification and service improvements to meet GHG reduction targets. We can’t do this without our provincial and federal partners unless bus riders + municipal taxpayers pay the full bill 7/

In a statement to CBC News, the Department of Children, Seniors and Social Development said the program’s budget was negotiated with Metrobus.

“We are committed to continuing to work with the City of St. John’s and Metrobus to roll out the program to all income support recipients, and new this year, seniors receiving the Guaranteed Income Supplement and young people receiving services from the youth services program.

Can ‘bus-as-flights’ get Americans out of cars and planes? – Streetsblog USA