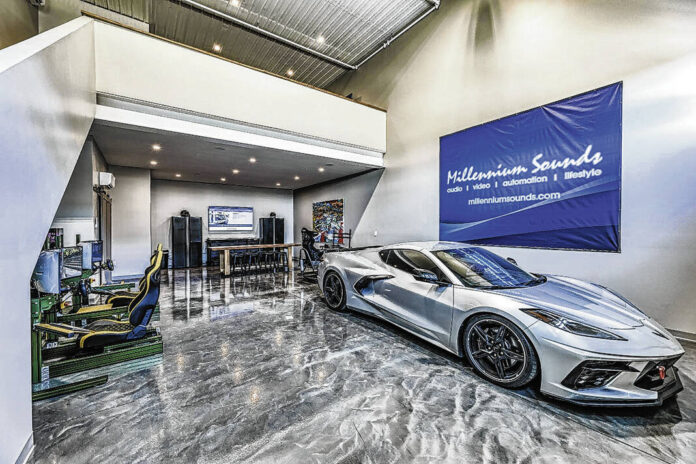 Customization of condos at Motor District runs the gamut, from simple to elaborate. (IBJ Photo/Eric Learned)

INDIANAPOLIS — Jay Farmer had a problem, and it led to a solution that has become a community for car enthusiasts in central Indiana.

Fifteen years ago, Farmer decided he wanted to build a garage in his Florida home. He envisioned it as a place where he could build a collection of cars and hang out.

But Farmer quickly ran into problems and errors. Worst of all, when he finally finished the garage, he realized it was a lonely place.

“I found out I was on my own,” said Farmer, who now lives in Carmel and describes himself as a semi-retired real estate developer.

The desire to connect with other enthusiasts of all things wheeled and powered led to the establishment of Motor District Garage Condos near the intersection of State Road 32 and Ditch Road in Westfield.

Motor District opened its first two buildings a year ago, and plans call for a total of 13. Two are currently under construction. The 26 completed condos have been sold and 14 others are nearing completion.

Farmer described a condo with a garage as an urban shack, second office, and lounging space where people can store cars, motorcycles, all-terrain vehicles, and RVs. He said Motor District will eventually have 150 condo units, averaging 1,000 to 3,000 square feet on the ground floor, plus loft options. The $40 million development will eventually include approximately 180,000 square feet of ground floor space, including retail and an event plaza.

Farmer said California-based Superformance, which designs, develops and sells classic car replicas, plans to open a location on the southeast corner of the Motor District. The complex sits on 12 acres in the planned unit development of Springmill Trails, which includes residential, mixed-use and commercial projects.

Motor District condos cost between $200,000 and $500,000 and are the first of their kind in Indiana. Although condos with garages are still a relatively new concept, they have proven themselves across the country.

Farmer cited Minnesota-based AutoMotorPlex, which has two locations in suburban Minneapolis, as inspiration for what he wants to do in the Motor District. “In many markets it was really successful and very popular, and there was nothing like it in the Indianapolis area,” he said. “And I thought with our racing car heritage here, it would be a good fit.”

“One of the things I’ve learned is how difficult it can be when you don’t have all the utilities to your building where you need them,” Farmer said. “And, so, we’ve made it easy for people to do what they want to do in unity.”

The way people customize garage condos in Motor District runs the gamut from simple to elaborate.

While some stick to a simple build, Farmer said, others have gone all out with kitchens, bars, a game room, TVs, a sound system, sofas and a dining area. .

Garages are not technically required to be used for car storage. Some people store their hunting and fishing gear in a garage, while others may have a carpentry shop. The only restriction is that Motor District is not zoned residential, so Farmer said people are asked not to live in their garages.

“Some people spend more on constructions than on the garage,” he said. “People build the units to meet their specific needs.”

Location was crucial to Farmer when he started thinking about the Motor District in 2017. He wanted a location in Hamilton County, due to its higher-income demographics, and said Westfield “turned out be the perfect place”.

“On our side from Indianapolis to Fishers to Zionsville and well north of where we are, with US 31 being so easy with no red lights to get on and off, it’s good access to the people that we were targeting,” he said.

To start Motor District, Farmer teamed up with motor racing veteran and team owner Eric Bachelart and Travis May, principal of Westfield-based William Tres Development LLC. (Bachelart has since left Motor District to focus on running his Conquest Racing team.)

Despite pandemic-related delays that doubled costs — the 2019 price estimate for Motor District was $20 million — Farmer and his group began construction in January 2021.

They also started at a time of heightened competition for vehicle-focused communities in central Indiana, where passion for automobiles has been part of the region’s soul since the invention of the motor. internal combustion.

And about 30 miles west of Indianapolis, The Club at Putnam Park has been open for more than a decade. The club facility includes a track, club events and rental garages.

“We were able to really streamline our project and avoid a lot of mistakes by learning from what they did,” Farmer said.

The most important thing, Silikowski told IBJ, is giving people what they want.

“The majority of people who join us have a passion to start. They have the resources, but most of them don’t have the time, so we make it easy for them,” he said.

Farmer said Motor District’s ownership model appeals to people because they can design their garage condos to suit their needs. He added that garages have increased in value over time, so people can save money on their purchase if their circumstances change and they need to move.

“We have buyers who are very successful business people, but we also have our regular buyers who have a car or two, maybe a 70s muscle car that won’t win any awards, but that’s their pride. and their joy,” said the farmer. “Everyone fits around a common interest in really anything that has a drive.”

Bill Lehman was one of the first to buy a condo in the Motor District after May pitched the idea to him about two years ago.

Lehman, owner of Indianapolis-based audio-visual system retailer Millennium Sounds, said he spent about six months customizing his garage. A friend created a 3D rendering to arrange the space exactly as he wanted.

Lehman uses his 1,500 square foot garage condo as office space and a home for his 2020 Corvette C8 and two racing simulators, which sit on the ground floor.

The mezzanine has a kitchen equipped with a refrigerator, dishwasher, sink, stove and a 21-foot black walnut counter. There is a full bathroom with a walk-in shower.

“I would consider myself a car enthusiast, and so the car enthusiast part intrigued me,” Lehman said. “And then we’re actually using the space for work, so I’m going to go in there and work like an extended office.”

Lehman also held a fundraiser at his apartment in April for the nonprofit Firefly Children & Family Alliance. The event featured IndyCar driver Tony Kanaan, who raced against people in Lehman’s racing simulators.

Lehman said “being around a lot of other automotive guys” intrigued him and he developed friendships at the Motor District. “We met people we already knew but then they bought a garage there so we have more in common and we talk and communicate more now because we have a common interest,” he said. . “We also had current customers who bought garages.”

Building that sense of community is something Farmer and Silikowski emphasized, which sets their car condo communities apart from just being places to store vehicles.

“Golfers, where are they going? says Silikowski. “They go to the country club. Where are the pilots going? Where are they hanging out? They hang around in the sheds. This is where car enthusiasts go.

John Leonard, who does marketing and promotions for Motor District and organizes the annual Artomobilia show in Carmel, echoed that sentiment. In addition to charity events, Motor District also hosts a version of cars and coffee called the Mocha District, car shows and road rallies.