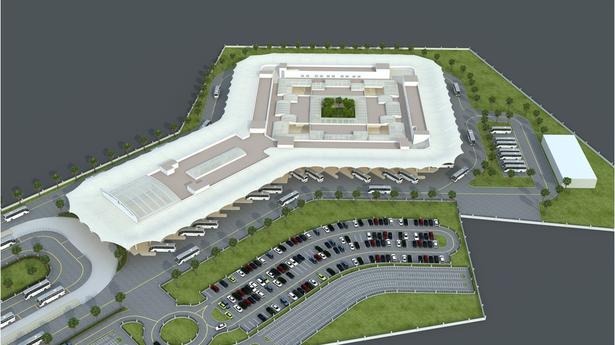 A new bus terminal will open at Solar in Erode

A modern bus terminal to accommodate buses heading to southbound districts will be built on a sprawling 24 hectare at a total cost of ₹63.50 crore at Solar Punjai Lakkapuram along Karur Bypass Road in the district.

The Comprehensive Mobility Plan for Erode Local Planning Area submitted by Tamil Nadu Urban Infrastructure Financial Services Limited (TNUIFSL) states that the central bus station located in the city center adjacent to Mettur and Sathy Road is used by more than a lakh of passengers every day. All city, mofussil and intercity buses are operated from the bus station, which sees over 4,100 bus services daily. The report highlighted the need for satellite bus stops at Solar and Sathy Road. Chief Minister MK Stalin, during the inauguration of various projects for the district via video conference on January 10, 2022, announced two bus stop projects.

During the consultation meeting held in Solar on May 1, the Minister of Housing and Urban Development, S. Muthusamy, said that the bus stop was located seven kilometers from the existing central bus station and that the roads to Palani, Muthur and Karur were located near the project. Bus stop. The Erode outer ring road is located at a distance of 1.5 km and the new bus station would not only reduce traffic congestion on the city’s roads but also contribute to the overall development.

Officials said the state government granted an administrative sanction to the project and minor modifications were made to the design. “Once the design is finalized, a call for tenders would be launched. The expected completion time for the work is 24 months,” they said.

One person in critical condition after tree fell on cars in Upper St. Clair