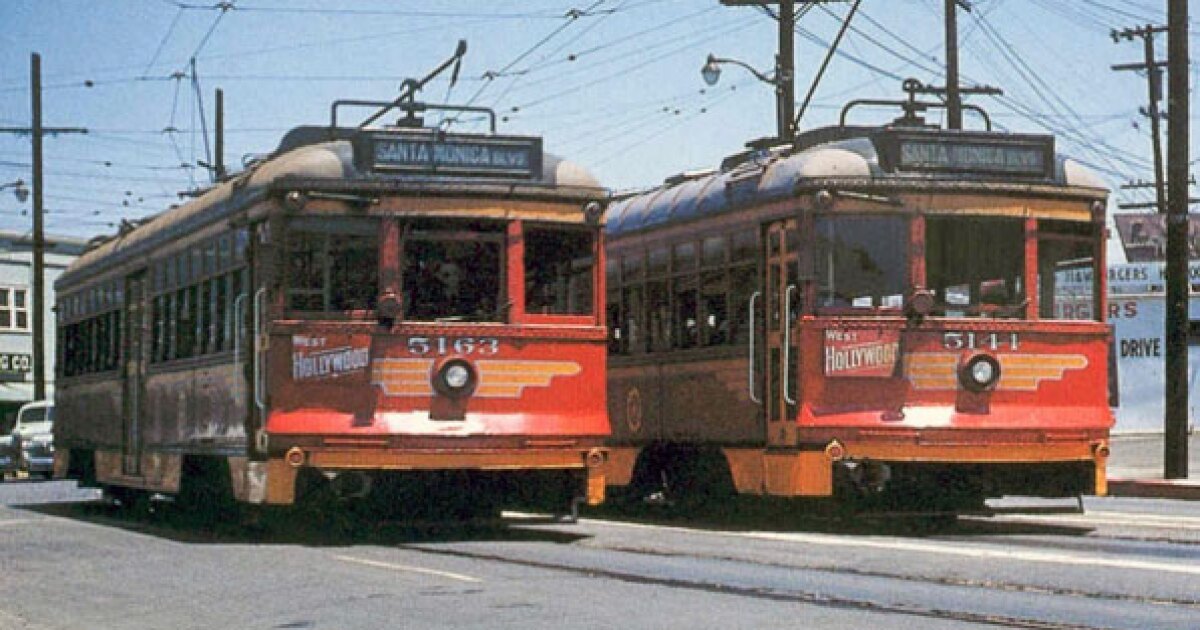 With the recent decision by the LA Public Works Council to deny a permit to the Sunset Junction Music Festival, the neighborhood festival’s thirty-year history may come to an end. But Silver Lake’s Sunset Junction, known for its unusual configuration and as a location for trendy cafes, bars and boutiques, is steeped in local transportation and social history that will continue to survive in the archives of southern California.

Sunset Junction’s name, along with its distinctive layout, is a relic of LA’s legacy as a streetcar city. Driving northeast of downtown Los Angeles on Sunset Boulevard, the Pacific Electric Red Cars reached a fork: they could continue on Sunset toward Hollywood Boulevard or turn west on Santa Monica Boulevard toward the city of Sherman, better known today as West Hollywood. The other street at the intersection, Avenue Sanborn, was not frequented by trams, but added complications to the layout of the crossroads.

Although it’s universally known today as Sunset Junction, maps from the Red Car era, like the one below, actually mark the convergence of streetcar lines like Sanborn or Hollywood Junction.

Streetcar tracks first reached the intersection in 1895, when the Pasadena & Pacific Railway completed the first intercity rail line between downtown Los Angeles and the seaside community of Santa Monica. Ten years later, the junction was created when the railroad, then renamed Los Angeles Pacific, extended its tracks to Sunset Boulevard towards the emerging city of Hollywood. Eventually, the original narrow gauge tracks were upgraded to the standard track, and in 1911, the “great merger” of competing intercity rail systems in Southern California brought the junction under railroad jurisdiction. Pacific Electric.

The junction continued to serve as an important node in the Los Angeles streetcar network until May 31, 1953, when Pacific Electric closed its South Hollywood-Sherman line, which ran through downtown Santa Monica Boulevard. Streetcars continued to run the Hollywood Line up Sunset until September 26, 1954, when buses replaced carriages. Today the rails and wires are gone, but an imaginative eye can still imagine the carriages making the great arched bend from Sunset to Santa Monica.

Sunset Junction’s role in the city’s history didn’t end with the demise of LA’s streetcar system. Instead, the events after the Junction, which became an epicenter for the nascent gay rights movement, would have national political and social significance.

The incident sparked one of the first public protests of the nascent gay rights movement. Six weeks later, and more than two years before the famous Stonewall Riots in Greenwich Village, a crowd of hundreds gathered outside the Black Cat to protest the raid. Lawyers and gay rights activists gave speeches condemning “police anarchy” and calling on the authorities to respect the “rights and dignity of the gay citizen”. Photos, documents and other records of this watershed event are kept in the ONE National Gay and Lesbian Archives, which is now part of the USC Libraries.

The protest did not end in violence – police monitored protesters but kept a distance – and its peaceful success sparked new public rallies across the region.

It also had national ramifications. Two of the celebrants arrested on New Years Eve, Charles Talley and Benny Baker appealed their obscene conduct conviction (they were seen kissing, one wearing a white robe) to court Supreme of the United States. Although the higher court refused to hear their case, lawyer for Talley and Baker broke new ground by asserting equal protective rights under the 14th Amendment. The Black Cat protests also inspired Richard Mitch and others to create what is today the country’s best-known LGBT publication, Avocado, as a means of disseminating information about the upward movement.

As Silver Lake earned its reputation as a gay-friendly neighborhood, Sunset Junction continued to serve as an important place within LA’s LGBT community.

In 1980, community leaders organized the first annual Sunset Junction Street Fair, designed to connect LGBT residents with members of other cultural and ethnic groups in the area. The event was a success and each year from 1980 to 2010, Sunset Junction hosted the festival, which eventually evolved from a cultural outreach effort to a showcase for independent art and music. While the future of the street fair is now uncertain, its contribution to the history of Sunset Junction, like those of the Pacific Electric Red Cars and pioneering gay rights activists, will remain in our region’s archives.

Most of the archives that contributed to the above images are members of LA as subject, an association of more than 230 libraries, museums, official archives, personal collections and other institutions. Hosted by the USC Libraries, LA as Subject is dedicated to preserving and telling the sometimes hidden stories and histories of the Los Angeles area. Our articles here will provide insight into the archives of individuals and cultural institutions whose collections inform the grand narrative – in all its complex facets – of Southern California.

From Streetcars to Hybrids: The Story of Saskatoon Transit