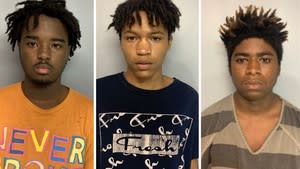 Authorities have arrested six teenagers who they believe are linked to several auto thefts in northern Georgia. The age of teenagers ranges from 15 to 17 years old.

Deputies found at least three cars on the shoulder and said the teenagers tried to escape when they turned on their patrol lights.

Investigators said the teens drove to Hall County in a Ford Escape, which they learned was stolen in DeKalb County. Investigators believe the teens stole the other two cars, a Mercury SUV and a Cadillac, in Oakwood.

Deputies said they quickly arrested three of the teenagers and later found another at a McDonald’s down the street. Authorities arrested the sixth teenager hours later in Gainesville.

Authorities have not identified the other teens because they are under 17. They are being held in a Gainesville youth detention center.

The sheriff’s office said Oakwood police are investigating the Mercury and Cadillac thefts as well as incoming automobile cases.

Will Porto be the main terminal for international rail services?

US $1.66 billion grant for new buses aims to reduce emissions